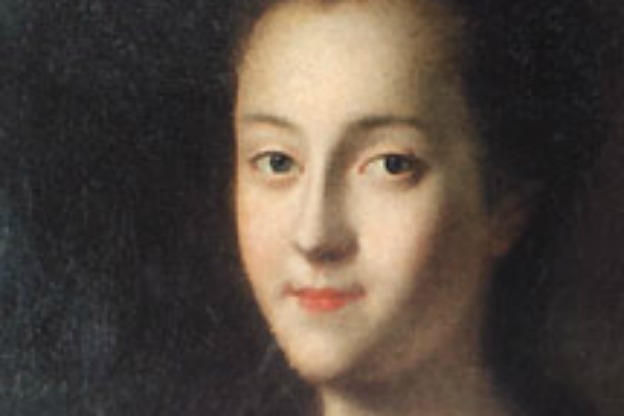 Let's start with the group La Reverdie performing music from their recording I Dodici Giardini, or The Twelve Gardens.

Italian nun (and later, Saint) Caterina of Bologna wrote the texts for these hymns in the 15th century, and they have been preserved in the Ferrara Codex, which is housed in the Bodleian Library of Oxford University.

We'll hear more music from this recording later in the hour.

We're exploring music associated with the name Catherine this hour, and our first "Cathy" profile is none other than the 18th-century Empress of Russia, Catherine the Great.

The Empress Catherine was a fan of all things opera, and even tried her hand at writing several of her own librettos. Especially fond of Italian opera, Catherine staffed her court in St. Petersburg largely with imported musicians. So, when Baldassare Galuppi landed a high-profile job in Venice as the maestro di coro at St. Marks, Catherine took notice, and it wasn't long before she extended him an invitation from the Russian Court.

Galuppi was reluctant at first-he didn't want to give up his cushy job. But when the Venetian senate granted Galuppi a three-year paid sabbatical on the condition that he continue to supply music for St. Mark's elaborate Christmas Mass, it was an offer he couldn't refuse.

Once in St. Petersburg, Galuppi produced and arranged operas, wrote cantatas and ballets, set Russian Orthodox sacred texts to music, directed the orchestra, gave his own recitals, and as promised, sent new music back to Venice. Here's one of the pieces he sent in 1766.

WhenÂ Caterina Martinelli was taken into the service of the Mantuan Court at the age of 13, the Duke tasked his chief composer Claudio Monteverdi not only with the child's room and board, but also with her musical training and development. Little Cate proved herself more than capable, and soon became the darling of Mantua's music scene.

When Caterina was 18, she was slated to sing the title role of Monteverdi's new opera, Arianna. Monteverdi had written the role especially for the young singer on a commission from the Duke for his wedding celebrations. But early in the year, tragedy struck when Caterina caught smallpox and died.

The loss was sorely felt-the opera's production was delayed, and even more telling, the Duke arranged for Caterina's burial in a marble tomb at the Church of the Carmine in Mantua-an unusual honor for a young court musician. The Duke then issued a new commission in Caterina's memory for which Monteverdi composed a cycle of madrigals titled Tears of the lover at the tomb of the beloved. (1:10)

We're listening to music for, by or about famous Katies, Catherines, and Katerinas.Â Next, we're shining a spotlight on that namesake and getting to know one visionary in the revival of early music: Catherine Mackintosh.

For over four decades, Mackintosh has been playing just about anything with strings: violins, viols, and even the viola d'amore, with numerous trailblazing early-music ensembles such as Musica Reservata, the English Consort of Viols and the Consort of Musicke, a group she helped form in 1969.

In 1973, Mackintosh was appointed the leader of the Academy of Ancient Music; she started teaching at the Royal Academy of Music in 1977; and in 1984, she became a co-director of the Orchestra of the Age of Enlightenment, with whom she eventually made the first period instrument recording of Vivaldi's viola d'amore concertos.

Catherine Mackintosh is perhaps most well known for her performances with the Purcell Quartet-a chamber group with whom she has made recordings for the past 30 years.

Here's something from the early days of the Quartet.

Catherine Mackintosh's more recent recordings as a member of Duo AmadÃ¨ explore music of the Classical period. Here she is performing the Andante Cantabile from Mozart's Violin Sonata no. 36 in F major with fortepianist Geoffrey Govier.

Our featured recording comes from the ensemble La Reverdie.

Their recent CD titled I Dodici Giardini, or The Twelve Gardens, takes its name from a devotional text written in the 15th century by our last "Catherine" of the hour: Caterina de Vigri, a Bolognese nun from the order of Saint Clare.

A prolific writer and musician, de Vigri is one of the few women from this time whose many works have been preserved. Her devotional writing I Dodici Giardini depicts a bride and her beloved as an allegory for the soul and God. The landscape in each of the twelve gardens changes throughout the cycle, from thorny thickets to well-tended grounds; in Garden III, the soil is hard but by the time you get to Garden XII, the imagery is of a succulent vine-the bride, or the soul-transformed by the journey.

Let's listen to scenes from Garden I, "The Hyssop of Humility" and Garden IV "Lilies of Renewal."