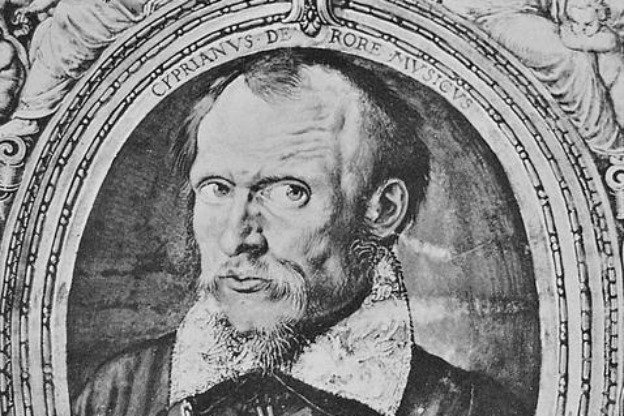 Cipriano de Rore is best known for his madrigals, and is counted among the composers who pioneered that secular genre.  His sacred works, however have garnered less attention. A 2013 recording by the Brabant Ensemble on the Hyperion label focuses on some of the lessor known sacred music by Cipriano de Rore.

Composers sample and borrow musical tidbits from each other all the time, and the 16th c. was no different. Renaissance composers wrote music for church Masses that often borrowed from the greatest hits of the day, and one of those popular tunes was the chanson called Doulce Memoire. It was originally by Pierre Sandrin, but ended up in countless copies and arrangements. It's not surprising then that Cipriano de Rore himself composed a Mass modeled on ‘Doulce mémoire' in which the musical motif of the chanson features prominently.

The orginial Doucle Memoire by Sandrin that Rore used as the model for his mass is not included on the Brabant ensembles recording, but a performance can be heard by Ensemble Clément Janequin from their cd, Fricassée Parisienne: Chansons de la renaissance française.

It's fun to listen through Cipriano de Rore's Missa Doulce Memoire from the Brabant ensemble's new recording, and pick out that original Doulce Memoire tune weaving in and out through different voices and in various incarnations. The same can be said for the other Mass on this album, Rore's Missa a Note Negre. For this mass, the model chanson Tout ce qu'on peut en elle voir is less familiar, but the tune can be seen online from a 1557 publication.

The two masses on this recording are separated by three motets for five voices, which show off a more complex polyphonic style than Rore's masses. One of these motets is a piece which in the liner note, is grandly referred to as "one of the finest motets of the entire century." The motet in question is Fratres: Scitote. With a text on taken from the Biblical account of the last supper, it presumably could have been used for a private celebration of the Christian ritual of Holy Communion.  Large scale choirs sometimes have a tendency to overwhelm this kind of music, but the pure and focused sound from the intimately sized Brabant ensemble made up of a dozen or so singers makes this performance especially enjoyable.