Blue Heron and the Peterhouse Partbooks 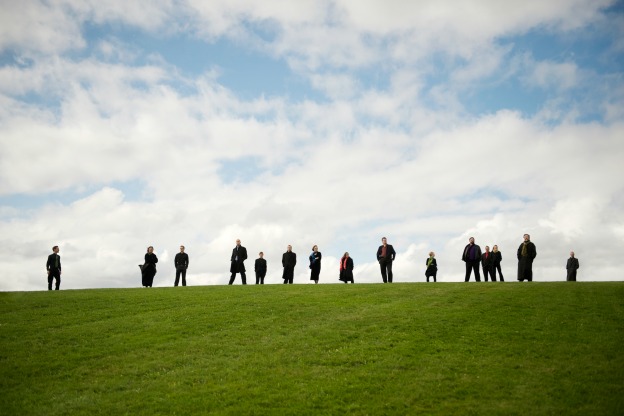 The Peterhouse Partbooks represent the largest and most important source of English music that survives from the era of Henry VIII. Â The Blue Heron Renaissance Choir has been working their way through the music contained in the Peterhouse Partbooks with a series of 5 recordings.Â In 2013, they released the third disc of the set, and like the previous two volumes, none of the music on this disc has ever been recorded before.Â The works included on the recording we're featuring today include a parody mass by Nicholas Ludford, John Mason's Ave fuit prima salus, and a troped plainchant Kyrie.Â

The story of the Peterhouse Partbooks is an interesting one. Â After Henry VIII died, and with the onset of the Protestant Reformation that swept across England, much Catholic church music was destroyed. But a set of five partbooks did survive because a singer named Thomas Bull copied them while at Magdalen College in Oxford. In 1540, Bull moved and brought the copies with him when he took a job in the choir of Canterbury Cathedral. By 1630, through somewhat unknown means, the partbooks made their way to the library of Peterhouse, Cambridge, where they yet again survived the Puritan purgings of music libraries in the 1640's.Â

From the repertory included on this third volume of music from the Peterhouse Partbooks is theÂ Ave fuit prima salus.Â John Mason's Marian devotional piece is freely composed, that is not based on a cantus firmus, or any pre-existing melody. It goes along quite ordinarily for a while, and then a different sort of transition or cadential figure or vocal interplay catches the ear in an unexpected way

It's wonderful to hear music of this very unfamiliar composer-and we're lucky to have it since the Peterhouse Partbooks are the only extant source of John Mason's music.Â This music survived the trials of time, or at least mostly survived.Â Originally, there were five parts in the Peterhouse Partbooks: one for the treble range, one for alto, one each for a high and low tenor, and one bass partbook. But long ago, one of the tenor books went missing entirely, along with several pages from the treble book. Between these two losses, at least two-thirds of the compositions are incomplete. But while the missing parts have long prohibited the performance of much of the music found in this source, the recording we're hearing today is possible because of a scholar named Nick Sandon who became interested in the Peterhouse Partbooks back in the 1980's. Taking up the task of restoring and recomposing the missing voices, Sandon's informed re-compositions have finally enabled performances of this repertory.

Questions of Key and Performing Pitch

But even filling in the missing pieces doesn't answer all questions of performance practice. Â Scott Metcalfe, Blue Heron's director gives some further insights into the challenges of realizing this music in the thorough booklet notes including with the CD. There is a detailed discussion of performing pitch standards in the 16th century, (Blue Heron settles on A = 465, about a semitone higher than a standard A on a pianoâ€¦just in case you were wonderingâ€¦) but then there is even another element. The pieces on this recording are notated in low clefs. If performed as written, the range isn't that great for singers, but when transposed up a fourth, the voice parts lie well within comfortable and customary vocal ranges of music from the same time notated in ordinary clefs.Â So, the pieces heard on this recording are sung a half-step higher than a quote-unquote normal A, and transposed to sound a fourth higher than how they are notated in the scores.

The bulk of the recording is taken up by Nicolas Ludford's cantus firmus Missa Inclina cor meum. The cantus firmus is hardly ever recognizable, but maybe you can hear it on the Pleni sunt celi text of the SanctusÂ Â where the bassÂ intones the chant melody very slowly with the top voices spinning melifulously above.