Eclipses are awe-inspiring even today- but imagine witnessing an eclipse in the days before dollar- store glasses.  You might not know why the sun was disappearing- or, if it would ever return. Join us this hour as we delve into music that cries out against the gathering dark.  From Scotland’s Black Hour to waning sight, we’ll explore eclipse-themed music from across the centuries. We’ll also sample a dark 2018 release, Rions Noir, from a group with the fascinating name Ratas del Viejo Mundo.

That was Stile Antico singing “Tenebrae factae sunt” from the Spanish Renaissance composer Tomas Luis de Victoria’s Good Friday Responsories.  The text depicts an anguished scene: As darkness falls and Jesus is crucified, he cries out: “My God, my God, why hast thou forsaken me.”  It’s a heartfelt cry that Victoria, who was a Catholic priest as well as a composer, must have felt keenly.

Have you ever witnessed an eclipse?  If you were among the lucky witnesses to 2017’s total solar eclipse, you probably planned ahead.  Maybe you mapped out your route, booked an AirBandB, or bought a stylish pair of eclipse glasses.

But imagine if you lived in 15th century Scotland and the sun succumbed, without warning, to darkness.  What would you think?  How would you feel?  In his 1577 Historie of Scotland, Raphael Holinshed described what happened in 1433.  “In the same yeere the seventeenth day of June, was a terrible eclipse of the Sunne, at three of the clocke at afternoone, the day being darkened over head for the space of one halfe hour together, as though it had been night, and thereup it was called “The Blacke Hour.”

Among those with the opportunity to witness the Black Hour was a musical king, James I of Scotland, not so long ago returned from many years’ captivity at the English Court.  James was a composer as well as a King, and when he returned to Scotland he brought with him the musical styles he’d learned abroad.  Let’s hear some of the music that might have been in the air at the English Court during the time of  James’s captivity.  First a Gloria, possibly composed by another English King, Henry V.  Then we’ll hear Ave Regina Caelorum by Leonel Power, one of the major players in early 1400s English musical life.  Both tracks were recorded by The Binchois Consort under the direction of Andrew Kirkman.

Two pieces recorded by The Binchois Consort.  We heard Leonel Power’s motet Ave Regina Caelorum.  And before that a Gloria composed by “Roy Henry-“ possibly Henry V of England.

In George Friederich Handel’s oratorio Samson, the title character’s hair gives him supernatural strength.  He whispers the secret of his powers to his wife Dalila, who cuts off his hair while he sleeps, rendering him helpless to resist capture by the enemy Philistines..  His captors put Samson’s eyes out, blinding him. In the famous aria “Total Eclipse,” Samson uses the eclipse as a metaphor for his lost eyesight, bewailing his fortune.  Handel himself eventually lost his sight, and some accounts have described his own aria moving him to tears toward the end of his life.

We’ll hear Total Eclipse, as well as the recitative and chorus that follow in the oratorio, recorded here by The Sixteen under the direction of Harry Christophers.

The Aria Total Eclipse, followed by a recitative and then the Chorus Oh First Created Beam, from a recording of George Friederich Handel’s Oratorio Samson by The Sixteen under the direction of Harry Christophers.

The English period-instrument orchestra the Academy of Ancient Music is best known for…well….ancient music. And we’ll hear a little of their early fare before sampling something completely different, a commissioned piece by 20th and 21st century composer John Tavener called Total Eclipse. Tavener’s piece is written for the orchestra plus soprano saxophone, countertenor, tenor, choir--and a percussion ensemble featuring 19 tympani and Tibetan percussion instruments, such as the ritual temple bowl and tamtam.  The work, which illustrates the conversion of St. Paul, is a startling departure from the Academy of Ancient Music’s usual routine- as an eclipse must have been in ancient times.  We’ll hear a brief excerpt from that.  But first, Bach--- two bourrees from J.S. Bach’s Suite No. 1 in C.

Two contrasting pieces from the discography of the period instrument orchestra The Academy of Ancient Music.  First, we heard two Bourrees from J.S. Bach’s Suite No. 1 in C, followed by an excerpt of John Tavener’s Total Eclipse.

What would a program about darkness be without John Dowland’s famous lute song “In Darkness Let me Dwell?” Here it is sung by tenor Paul Elliott, from a 1992 CD by Echo’s Muse.

An inrush of darkness is a hallmark of a total solar eclipse, and a potent human symbol for tragedy, sorrow, and fear.

The Christian liturgical cycle makes use of this symbol during the three days leading up to Easter, Maundy Thursday, Good Friday, and Holy Saturday.  These days encompass Jesus’s death and the period prior to his resurrection, and are often commemorated with Tenebrae services, which feature the gradual extinguishing of candles to embody the departure of light from the world.

Many composers have written stunning music for Tenebrae. We’ll sample three versions of one part of the Tenebrae Responsories from Holy Saturday, Aestimatus sum.  Though separated by time and space, each composer offers a meditation on darkness using the same text, as follows:

Three versions of a nocturne from the Tenebrae service for Holy Saturday.  We heard Ensemble Turicum’s version of music by the little-known early 19th- century Brasil-based composer Antonio dos Santos Cunha.  And before that--settings by Leonardo Leo and Tomas Luis de Victoria, recorded by Nova Ars Cantandi and Stile Antico.

The British choral ensemble Tenebrae has recorded its share of music for the Tenebrae service for which it was named.  We’ll listen to Tenebrae’s recording of an anonymous Medieval hymn for Passiontide: Pange lingua gloriosi, often sung on Maundy Thursday.  And following that, a setting from the responsories for Holy Saturday, Astiterunt reges terrae, this version composed by the notorious Italian nobleman, composer (and murderer!) Carlo Gesualdo.

An anonymous hymn for Passiontide, Pange lingua gloriosi, recorded by the British choral ensemble Tenebrae.  And following that, we heard Tenebrae’s version of Astiterunt reges terrae, from the Tenebrae responsories of Carlo Gesualdo.

Our featured release this week is by an eclectic European ensemble with the curiously descriptive name “Ratas del Viejo Mundo, or Rats of the Old World,” founded by lutenist Floris de Rycker . Their 2018 release is called Rions Noirs: Chanson et Polyphonie Profane Pre-Baroque. Mood, as opposed to geography or time, is the Rats’ through-line.  Rions Noirs translates roughly to black laughter . . . and we’ll begin by listening to the group’s interpretation of a chestnut of the Renaissance repertoire, Orlande de Lassus’s chanson La Nuit Froide et Sombre (the night, cold and dark).

More music, stories, history, recordings, and other information about the world of early music can be found on our Harmonia Early Music Podcasts, online at harmonia early music dot org and through iTunes. You’re listening to Harmonia, from PRI, Public Radio International.

The writers for this edition of Harmonia was Anne Timberlake. 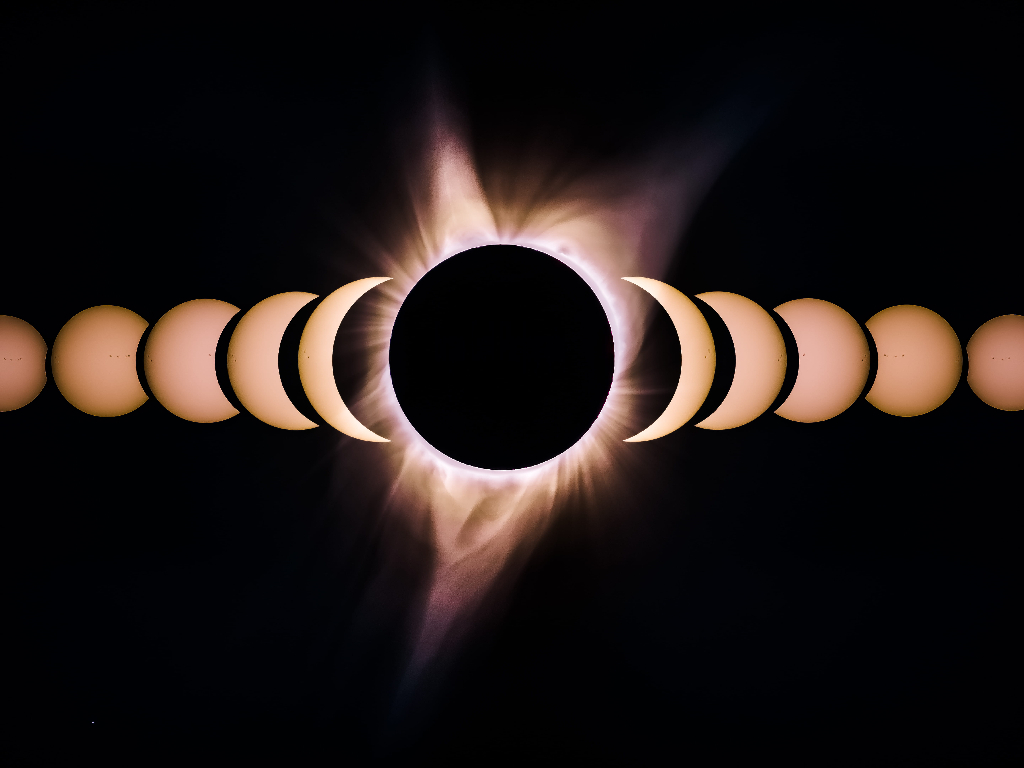 Eclipses are awe-inspiring even today, but imagine witnessing an eclipse in the days before dollar-store glasses. You might not know why the sun was disappearing, or if it would ever return. Join us this hour as we delve into music that cries out against the gathering dark. From Scotland’s Black Hour to waning sight, we’ll explore eclipse-themed music from across the centuries. We’ll also sample a dark 2018 release, Rions Noir, from a group with the fascinating name Ratas del Viejo Mundo.