Welcome to Harmonia . . . I’m Angela Mariani. On this episode, we’re meeting up with Dame Fortune and her wheel in the fourteenth century, a period when plague and famine, religious and political strife had rendered the world a very confusing place. Fortune, sometimes a heroine, sometimes an evil adversary, makes frequent appearances in music, whether courtly love lyrics or political diatribes, to make it clear that nobody, no matter what their social rank, is immune to the wiles of Fortune. Plus, the viol consort Nota Bene brings us settings of poetry by Vittoria Colonna on our featured recording QuatTORdeci Sonetti Spirituali.

The Dufay Collective played a (French) estampie and an (Italian) Saltarello, from their 2008 Avie recording A l’estampida, a collection of medieval dance music from Italy and France. They were played on reconstructed medieval instruments and unaltered Eastern instruments.

The Wheel of Fortune was an enduring image centuries before Vanna White became Fortune’s representative on earth. This hour on Harmonia, we’ll explore music of the fourteenth century: an age of political upheaval and turmoil, not to mention the Great Famine and the Black Death. In a world of such unpredictability, the ancient goddess and her prop provided a wonderfully visual way to make sense of it all.

So… let’s imagine a fashionably dressed Fortuna spinning a large wheel. Four small figures, dressed like kings, stand at 9, 12, 3, and 6 o’clock on the wheel, labelled respectively “regnabo (I shall reign),” “regno (I reign),” “regnavi (I have reigned),” and, at the bottom, the unfortunate sum sine regno (I am without a kingdom).

With that picture in mind, let’s drop in on a collection of some 169 pieces of music found interpolated in an elaborate copy of a satirical allegory called the Roman de Fauvel. At the center of the story is the encounter of Dame Fortune with a creature who is half-human, half-ass and whose very name, Fauvel, is an acronym for the Seven Deadly Sins. Fauvel has taken over the government, the princes and bishops love him, and he decides to woo and marry Dame Fortune. The Lady is not even remotely amused.

Here is a quick, but intense snapshot of the situation, a motet hurling three texts at us simultaneously.  Fortune, the top voice, says that she holds Fauvel in contempt whilst Fauvel, in the middle voice, confesses his love for Fortune; the third voice, perhaps that of the narrator, mutters darkly, “Fauvel's faithful cling faster to him than to doctrine, art, or learning.”

A dialogue between Fauvel and Lady Fortune ensues, with Fauvel saying, “Sweet, gracious lady” -“Douce dame debonaire” - and Fortune’s reply “Fauvel, whaddya want?” and the piece continues, alternating the voices on each line of text:

“Take me for your husband
“Shooh! Enough! Go away!
“Sweet lady, what am I to do?
“Never my love shall I give you.”

We’ve heard two tracks from the 2007 EMI Classics release of the first recording ever of the Roman de Fauvel, made in 1972 by the Studio der Frühen Musik, directed by Thomas Binkley.

Dame Fortune knows perfectly well that Fauvel is an ass, and she is not afraid to say so!

“Think, Fauvel,” she says, [quote] “on the shape of the world in its brief course. Blackened as a hollow gourd, its form fades as a waxen image… As the world spins all to death … you, condemned with all your seed, herald the antichrist.”

Cheery stuff. That was “Fauvel, cogita,” Fortune’s warning to the half-man-half-ass who somehow got to the top of her wheel when everyone curried his favor (and yes, that’s where that expression originates.) The Boston Camerata, Joel Cohen, director, and Project Ars Nova recorded Le Roman de Fauvel for Erata in 1995. Spoiler alert: despite Fauvel’s romantic advances, Fortune rejects Fauvel, and he ends up wed to her handmaiden, Vain Glory.

Most of the music in the Roman de Fauvel is anonymous. But one composer, Philippe de Vitry, is fairly clearly represented in several compositions, one of which we’ll hear now. Throwing three texts at us simultaneously, its text tells us about the dangers of power: the top line “trying to fly higher than Icarus,” obviously set for a major fall. The middle text: “Alas, sneaky Fortune, …  by a spinning of your wheel, You have plunged me, Naked, into a lake of tears.” And the bottom voice says simply, “Alas, my soul is sad.”

The ensemble Sequentia recorded the Motets and Chansons of Philippe de Vitry for Harmonia Mundi in 1988. That was a motet entitled Amon novi/Heu Fortuna/Heu me from the unique Roman de Fauvel manuscript.

We turn now to a composer about a decade younger than Philippe who was, perhaps surprisingly, more renowned as a poet in his own day than as a composer, Guillaume de Machaut. Guillaume is no stranger to Dame Fortune. Early in his career, Machaut’s Remède de Fortune encourages us to cultivate indifference to the vagaries of Fortune and stop wishing vainly for things that are impossible.

The top two voices of this motet from the Remède, for instance, are about betrayal by Fortune, Machaut paints a rather monstrous portrait of Fortune, [quote] “without faith, without law, without justice,” “excrement covered in rich clothing,” “False, treacherous, perverse, and bitter…”

Let’s give our brains a rest now and hear a Machaut ballade, in which there is only one text, even though the music is still in more than one part. The poet knows it is inevitable that Fortune’s wheel will turn against him--but he does not want to give up on the love that he has found.

That was the Orlando Consort performing Machaut’s De fortune on their 2018 CD The Gentle Physician.

The Wheel of Fortune has been our theme this hour on Harmonia. Let’s sneak in a quick side-trip to Italy to contrast the French ballade we heard earlier with an Italian ballata from near the end of the century. This is Francesco Landini’s Fortuna ria, another piece that exists in one source in two parts, in another in 3 parts. The performance we’ll hear from Mala Punica begins in two parts, then the third part is introduced in the middle of the song and we hear all three parts together until the final refrain gently ends the piece as it began.

“Fortune, love, and the cruel lady are all against me,” - Fortuna ria, by Francesco Landini, performed by Mala Punica on their 1995 Arcana release entitled D'amor ragionando.

We’ll end our adventure with Fortune’s ever-turning wheel, in a piece by a French composer who went to England to work before moving back to France. You’ll hear the rhythmic complexity of the piece, and you’ll hear the text  “False, perverse Fortune” -- [Fortune, fausse, perverse] three times, since that’s happens to the first line of poetry in fourteenth cenury French rondeaux.

Our featured release this hour is Quattordeci Sonetti Spirituali, released in 2020 on the Toccata label. The consort of viols Nota Bene is Joanna Blendulf, Wendy Gillespie, Emily Walhout, and director Sarah Mead, joined by guest Julie Jeffrey, playing on copies of late C16 instruments from northern Italy, with singers Michael and Anney Barrett, Jason McStoots, Matthew Anderson, and Steven Hrycelak. They bring to life fourteen pairs of spiritual sonnets written by Vittoria Colonna, who was in 1538 the first published woman poet in Italy. The composer was Pietro Vinci, who spent most of his career in the north of Italy at Santa Maria in Bergamo. In 1580 he published one of his dozen books of madrigals entitled Quattordeci sonetti spirituali della illustrissima … Vittoria Colonna. A serendipitous meeting of Sarah Mead, the director of Nota Bene, with Ramey Targoff, the biographer of Vittoria Colonna, led to a multi-media performance and this CD.

Vittoria Colonna was from a wealthy family near Rome. Widowed as a young woman, she made a decision extraordinary for a 16th century Italian noblewoman:  not to remarry OR become a nun, but to devote herself to poetry, at which she was very skilled, and to spirituality. She had a deep friendship with Michelangelo Buonarroti and gave him 103 spiritual sonnets like these. Each sonnet consists of an 8 line stanza followed by a 6 line one, and the sonnets are paired.

One of the earliest of the pairs is dedicated to the Passion of Christ. The first sonnet begins, “Opening wide your arms upon the cross…O Lord, you opened the heavens and limbo, rent the rocks,” until we are “filled with a burning fervor.” Then in the second sonnet she welcomes the resulting peace and “bountiful pity conferred upon us by grace, light and love.”

We heard Nota Bene performing a pair of sonnets by Vittoria Colonna put to music by 16th-century composer Pietro Vinci.

Voices and viols can be combined in many different ways. In this set of two of Colonna’s spiritual sonnets dedicated to St. John the Baptist, the lower 3 voices are accompanied by all five viols.

Finally, we turn to the last pair of sonnets, dedicated to the Holy Innocents, who are exhorted to use their breasts and shields against Herod [quote] “with celestial palms and sacred laurel crowns; the wings had hardly sprouted upon your shoulders, o sweet tiny cherubs, than your very first flight raised you to the heavens.”  If you listen carefully, you may hear their little wings carrying them up to heaven! 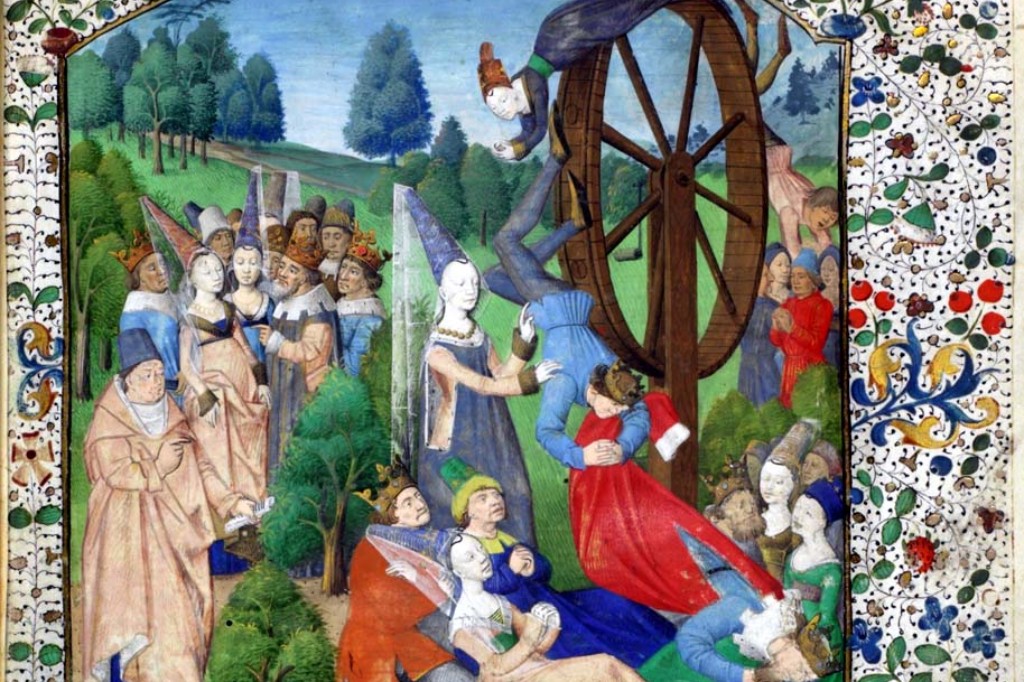 We’re meeting up with Dame Fortune and her wheel in the fourteenth century, a period when plague and famine, religious and political strife had rendered the world a very confusing place. Fortune, sometimes a heroine, sometimes an evil adversary, makes frequent appearances in music, whether courtly love lyrics or political diatribes, to make it clear that nobody, no matter what their social rank, is immune to the wiles of Fortune. Plus, the viol consort Nota Bene brings us settings of poetry by Vittoria Colonna on our featured recording Quattordeci Sonetti Spirituali.