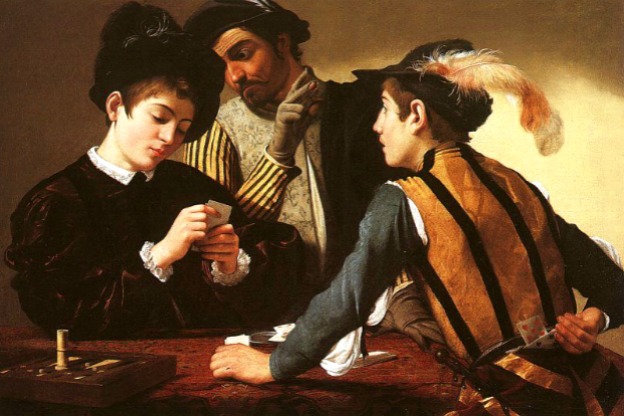 The urge to gamble is so embedded in our language that it's tough to imagine a life without a wager or two of some kind. And "we're game" this hour on Harmonia, as we explore music by gamblers, for gamblers, and about gamblers. (And what happens on Harmonia stays on Harmonia, right?)

In Cervantes's second volume, Don Quixote's squire, Sancho Panza, urges his master to come see his lady love and her damsels riding forth on "gambling hags."

Like Cervantes's text, Telemann's burlesque rides the fence between straight-faced and silly. We'll hear more from this work later in the program.

Making music is a gamble. You scratch out some notes (or print them), or pluck them from your memory, and hope against hope that what emerges in performance will please your listener. Is it any wonder that music has long been associated with gamesmanship?

The composer, harpsichordist and singer Domenico Scarlatti was talented, fiery, and an inveterate gambler. It's possible that we owe some of his music to his penchant for betting: legend has it that Queen Maria of Spain and the castrato Farinelli together offered to pay off Scarlatti's gambling debts if he would write down the sonatas he'd been improvising in the royal chambers.

Let's hear one of Scarlatti's many, many sonatas for keyboard, the Sonata A Major. Jacques Ogg performs on the fortepiano, the "new" keyboard instrument of Scarlatti's time.

In gambling, the house always wins. This was certainly true for the Italian composer Gioachino Rossini, who made a tidy profit from his share of the income from the gaming tables in the foyer of the Teatro di San Carlo, the opera house where Rossini was musical director.

Opera goers in Rossini's time were not quite so well behaved as they are now, and Rossini's tables were open throughout operatic performances to capture the attention â€“ and money â€“ of music lovers who had wandered away from the stage.

Let's hear music by Gioachino Rossini, a master of house rules! â€“ the overture from the opera La Scala di Seta, performed on period instruments by The Hanover Band.

Mostclassical music lovers can belt out the first few notes of Carl Orff's cantata Carmina Burana. "O Fortuna," the work's first movement, has had star turns in movies, television shows, and many, many commercials-including ads for pizza, beer, aftershave, and peppermint patties.

What's not as well known is the manuscript from which Orff took his text. Carmina Burana was the name applied in the 1800s to a 13th-century manuscript found at the monastery of Benediktbeuren in Germany. The manuscript contains more than 200 poems in Latin, French, and German-and they're not your usual paeans and prayers.

Instead, the Golliards â€“ the traveling theology students or clerics thought to have authored the poems â€“ embraced wine, women, moralizing, and gaming.

Cash in your chips! Ante up! Bet your money on a bob-tailed nag! We're rolling the dice this hour on Harmonia as we explore music by gamblers, about gamblersâ€¦and now, music to gamble by.

What is high-stakes music? You can bet that Vegas casinos know, and it turns out, so do scientists. Research suggests that, if you want people to wager faster, you need faster music-a simple idea, and a profitable one.

In most casinos, this translates to pumping rock and roll. But what's an enthusiast of early music to do? One answer, (and he's almost always an answer), is Telemann.

Let's hear an up-tempo movement from Telemann's Burlesque de Don Quixotte, an orchestral suite depicting the exploits of Miguel de Cervantes's immortal wanderer. We'll hear the Don's attack on a row of windmills he believes to be giants.

Not that Telemann would have approved; his second wife, Maria Katharina Textor, had a serious gambling problem that nearly bankrupted the couple. We'll hear music from a time in Telemann's life when he was publishing prolifically-perhaps, to stay one step ahead of his wife's debts.

Let's listen to the ModÃ©rÃ© movement from Telemann's Quartet No. 6 in E Minor, one of the "Paris" quartets.

Let's move from music inspired by France to the music of France itself: Versailles, where Louis XIV built a pleasure palace.

According to accounts of the time, Louis maintained thrice-weekly appartement evenings, parties in which revelers moved between a series of drawing rooms featuring food, drink, billiards, and in the "Mars" drawing room, gaming tables and musicians.

The composer Francois Couperin may well have composed music for soirees such as this; certainly his Concert Royaux were composed at court for the King and were intended for listening as opposed to dancing.

To segue from our gambling theme this hour, we're "wagering" on this featured release, a recording of 15th century Franco-Flemish composer Johannes Ockeghem's Missa L'homme armÃ©.

The writers for this edition of Harmonia are Anne Timberlake and Elizabeth Clark.