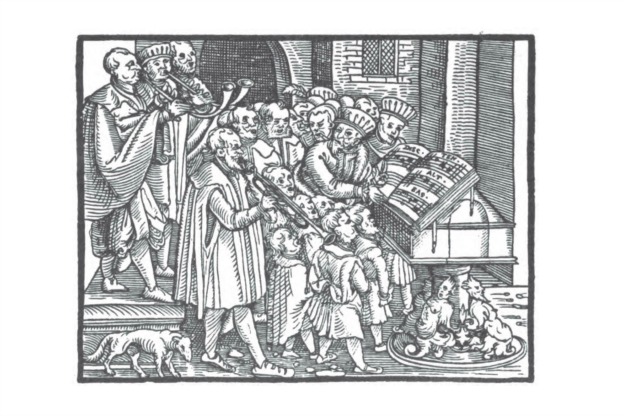 The Renaissance Franco-Flemish composer, Nicolas Gombert, fits squarely between Josquin and Palestrina and in fact was likely one of Josquin students. Â Renaissance theorist Hermann Finck in hisÂ Practica Musica (1556) hailed Gombert as an innovator for his compositions that were "rich with full harmonies and imitations." Rich and full.Â There are perhaps no better words to characterize Gombert's fully developed polyphony. His music is imitative and dense. Phrases overlap one to another, motives taken up in succession by each voice in turn.

Hermann Finck wasn't Gombert's only contemporary who held him in high regard. In 1542, Ganassi is on record referring to Gombert's abilities as â€˜divine'; Juan Bermudo (1555) referred to him as â€˜the profound musician.' The best evidence of his popularity though is the prominent place Gombert's works held in European printing houses. Venetian publishers Scotto and Gardane put out Gombert's motet collections between 1539 and 1552, and his works continued to be published well after his death. Â As a result, a lot of Gombert's music has survived the trials of time-of it 10 masses, a set of 8 Magnificats, 60 chansons, and some 160 motets.

The vocal group called Beauty Farm sings the music of GombertÂ on their recent release on the Fra Bernardo label. Â It would be interesting to know the story behind the ensemble's name, Beauty Farm, but never mindâ€¦it's peculiar enough that you're not likely to forget it!

This is Beauty Farm's second recording of music by Gombert and it's packed with 17 motets- some that have never before been recorded.Â Which ones are recording premieres is unfortunately not indicated in the liner note, but there are many that are probably new to many listeners. On the other hand, Gombert fans will recognize favorites like 'Ego sum qui sum' or â€˜Hortus conclusus'.Â Perhaps the most well-known and often performed of Gombert's motets is his â€˜Media Vita,' and it receives a stellar performance on this disc as well.

Born at the very end of the 15th century, Gombert joined the chapel choir of the prestigious court of Emperor Charles V in Spain in 1526 and by 1529 was its maÃ®tre des enfants, charged with the care and education of children. As a part of the Imperial entourage, Gombert traveled extensively throughout Europe.Â Perhaps this accounts in some part for the wide dissemination of Gombert's music and reputation. In any case, all seems to have gone well for Gombert until about 1540, when, accused of indecency with a choirboy, the composer was sentenced to the galleys, a punishment that amounted to a sort of criminal detention at sea. Â Gombert apparently continued composing during his exile and after his release become a Canon at the Cathedral of Tournai.

In music (as in life) Gombert is famous-or infamous-for dissonance. Interpretations of Gombert's compositions are complicated by the fact that they are littered with questions of musica ficta, that is, the un-notated raising or lowering of individual notes that in context, performers must infer for themselves. (Ah, the challenges of early notation!) In Beauty Farm's interpretation the ensemble seems to choose the more harmonically thrilling option more often than not. TheÂ dissonances are admittedly wonderful, though it is dissapointing that the brief liner note offers little in the way of explanation and example. Listeners are told only of "new editions" that, presumably in reference to these questions of ficta, "reveal a dark, intricate, rough and vibrant music.'

Intricate, rough, vibrantâ€¦that Beauty Farm strives for these particular qualities in their interpretation seems evident. Granted Gombert's dense, meaty, complex polyphony isn't exactly easy listening, but the performers could make more of the rare opportunities in the score for lightness or repose. Still, Beauty Farm's performance draws listeners in.Â The six voices of the ensemble are well balanced, and their stylish approach to this music is admirable.