A Baroque Christmas In The New World 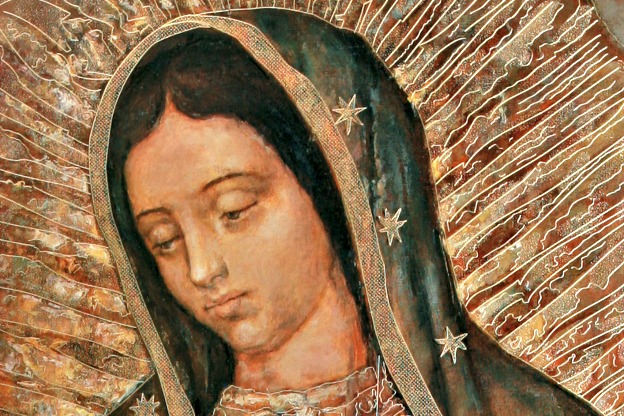 Welcome to A Baroque Christmas in the New World, a special holiday edition of Harmonia.

We're celebrating the holidays with a unique performance of music from 17th- and 18th-century Mexico, Peru and Bolivia, including a cantata and three free-standing works by colonial Mexican composer Manuel de Sumaya â€“ works that have not been performed since his lifetime!

Join us as musicians of the Historical Performance Institute at the Jacobs School of Music of Indiana University bring these sparkling works to life once again.

Let's start with music from two motets by the Portuguese-born composer Gaspar Fernandes (c.1570-1629). Fernandes spent most of his professional life in Central America at Puebla Cathedral, from 1606. Among his works are the first surviving examples of Latin secular music to be written by a composer in the New World. His masterful style reveals a tightly woven tapestry of counterpoint, with witty motives exchanged between voices in a playful rhythmic dialogue.

Juan Gutierrez de Padilla (c.1590-1664) was already an influential musician in Spain and Portugal when he began a new life in colonial Mexico. Born in Malaga and trained as a chorister at the Cathedral there, Padilla's journey across the Atlantic eventually gained him the top musical post in the leading colonial musical institution of the early-seventeenth century â€“ Puebla Cathedral.

It was reputed to be equal in quality to any of its European counterparts. On first arriving, Padilla began work under his senior colleague, Gaspar Fernandes. From the Puebla Choir Book in the Cathedral archives, we'll hear the Gloria movement from Padilla's Missa Ego flos campi, richly scored for eight voices.

The festal, antiphonal nature of the writing uses a technique not typically found in Mass settings of the European tradition.

Fragments of the Gloria text are used repeatedly as quasi-refrains. During the first half of the Gloria, one choir regularly repeats the phrase "bonae voluntatis" (good will) as the other proceeds through the text; during the second half of the movement, the ensembles switch duties at the phrase "miserere nobis" (have mercy on us). This allows the composer to create striking contrasts and continuities â€“ giving greater character to the story about the choirs of angels who announce to the shepherds the news of Christ's imminent birth in Bethlehem.

The festive nature of the writing uses a technique not typically found in Mass settings of the European tradition. Fragments of the Gloria text are used repeatedly as short refrains, giving greater character to the story about the choirs of angels who announce to the shepherds the news of Christ's birth.

Padilla's Gloria is followed by a responsory motet which celebrates the Immaculate Conception of the Blessed Virgin Mary, composed by Antonio de Salazar (c.1650-1715). Salazar spent much of his career as Maestro di Capella at the Cathedral in Mexico City. He also was teacher and mentor of the great Manuel de Sumaya, whose music we'll hear newly premiered later in this program.

Salazar's music traveled throughout the Americas; many of his compositions are found in archives spread widely over the region. His Latin liturgical music is masterfully crafted, and the 8-voice motet Conceptio gloriosae heard here offers a prime example. Although it survives in an incomplete state, missing two voices, the musicologist Craig H. Russell has reconstructed these for the edition used in this performance.

The work centers on the Virgin Mary; in Mexico City the feast of her conception was a hugely important religious and civic spectacle during the season of the church's preparations for Christmas. (Dana Marsh, 2014)

Following the star to Bethlehem

Los Colflades brings the musical language of the street into the sanctuary of the church, creating a popular hybrid style. Taking the story of the Wise Men following the star to Bethlehem, the poetry of Los Colflades used contemporary characters and imagery that Central Americans of the period would have easily identified with â€“ bringing the biblical story of the nativity directly into a late 17th-century present.

And now for something incredibly special!

Manuel de Sumaya is perhaps the best-known composer of 18th-century Central America, and we're about to hear three works by Sumaya that have not been performed since his lifetime. Two are free-standing villancicos for Christmas â€“ Cielo y mundo, and O suma alegria. The third is a four-movement cantata for soprano, violins and continuo in honor of the Blessed Sacrament. The soprano soloist is Kathryn Summersett.

Two more villancicos for Christmas complete our program; the first by Sumaya â€“ Ay como gime â€“ reflects on the madness of King Herod, who hearing of the imminent birth of Christ orders all first-born boys in his kingdom to be murdered. Mary, Joseph and Jesus escape this fate with their flight into Egypt. Countertenor Andrew Rader and tenor Francisco Ortega are the soloists.

Then to complete our program, we return to Juan de Araujo through his popular villancico for Christmas, Ay andar.

The writers for this edition of Harmonia are Dana Marsh and LuAnn Johnson.

The performers on this holiday special were all students and faculty of the Historical Performance Institute of the Indiana University Jacobs School of Music, directed by Dana Marsh. Soloists were Kathryn Summersett, Christina Lynch, Andrew Rader, Francisco Ortega, and Kevin deBenedictis. Special thanks to Stanley Ritchie, Wendy Gillespie, Nigel North, Keith Collins, Kris Kwapis and Linda Pearse. The modern performing editions of the premiered works by Manuel de Sumaya were prepared by Craig H. Russell. Our concert producer was Malcolm Bruno, and our audio editor Adrian Hunter.

Special thanks also to Paul Borg and the Latin American Music Center of the Jacobs School of Music, to the Lilly Library of Indiana University, to First United Church of Bloomington, IN, and to Mark Kausch and the folks at PRI, Public Radio International.