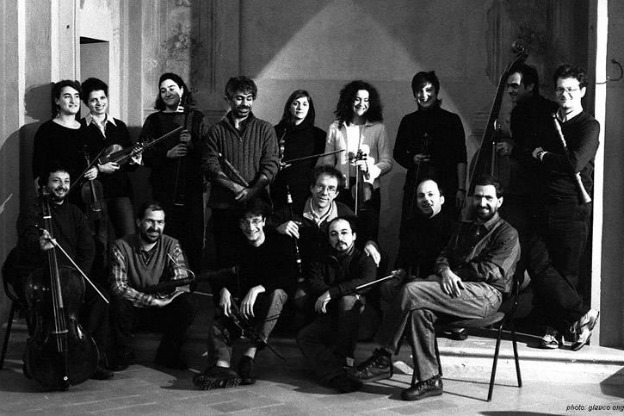 A recent release from the ensemble Zefiro, led by oboist Alfredo Bernardini presents 3 of Bach’s Orchestral Overture suites plus two orchestral arrangements of the opening chorale movements of cantatas 119 and 194.  There are lots of recordings of the Orchestral Suites—this one zeros in on Bach's associations with France, and the incorporation of the French style into his music.

Before the age of internet and air travel, cultural exchange wasn’t nearly as easy as it is today—the world has in a very real sense, gotten much smaller. Yet, even without leaving Germany, Bach had regular contact with French musicians and dancing masters from a young age. That Bach drew inspiration, at least in part, from Lullian fashions and contemporary French music in his four Suites is obvious with their characteristic overtures and subsequent dance movements.

French influence is very apparent in the Courante from Bach's first Suite.  Bach's courante bears resemblance to another courante written by the French composer, Jean-Féry Rebel in his Les caractères de la danse. Published in Paris in 1715, Rebel's compendium of dances was widely circulated in Europe as an example of the French dance forms in current fashion.  Listening to the Bach and Rebel back to back, it sure seems possible that Bach knew Rebel’s piece, and modeled his own Courante after the French composers’

None of the autographs of Bach’s Overture Suites have survived, so there are some questions about their original scoring.  The suites were probably first written during Bach’s years in Cöthen around 1720-give or take a few years. Bach brought them out again in the 1730’s for the Collegium Musicum concerts which he managed after having moved to Leipzig. In his liner note, Zefiro’s director, Alfredo Bernardini points out that Bach likely reworked the suites for the Collegium. He proposes that the third Suite, for example, could possibly have first been conceived for strings alone with the addition of oboes, bassoons, trumpets and timpani coming only later. Bernardini makes a similar case for an original fourth Suite without trumpet or timpani parts.

On Zefiro's recording, there is no missing the winds.  The ensemble was formed in 1989 by oboists Alfredo Bernardini and Paolo Grazzi, and the bassoonist Alberto Grazzi, explicitly to specialize in “eighteenth-century repertoire that gives particular prominence to wind instruments.” So, of course, they perform the largest scale versions of the suites with full winds. But even without knowing Zefiro’s founding history, once you listen through the disc, you just might guess that an oboist leads the group.

There are only a sparse few movements on the entire disc where the oboes don’t play.  It’s wonderful…! but by the end of the program, my ears feel super-sweet, almost like a tummy that has eaten only ice cream for dinner. The recording balance does tend to favor the oboe as well, the core string sound held a bit too much in the distance for my taste.

That aside, the unabashedly oboe-centric program is appealing, and its dedication to the late oboist, Bruce Haynes as one who inspired many generations of musicians and music lovers, is a tender memorial to the wonderful oboist and musicologist that the early music community lost in 2011.

Bach's fourth Suite offers an interesting look into Bach's process of adaptation and occasional reworking of his pieces. After its original composition, Bach revisited the overture of his fourth Suite in his cantata 110, adding a four part chorus in the fast section.

Zefiro has taken Bach’s reworking as a cue to do a couple of their own adaptations on this disc. Looking to other cantatas that begin with a chorus composed after this same overture form, Zefiro has backwards reconstructed instrumental overtures from the opening choruses of Bach Cantatas BWV 119 and 194. The resulting “music minus one” reconstructions prove convincing in Zefiro's performance.