Welcome to Harmonia . . . I’m Angela Mariani. The 8th century hymn Ave maris stella--Hail! Star of the Sea--is one of the best-known examples of Marian chant, or in other words, chant associated with the veneration of Mary, the mother of Jesus. Probably the best-known polyphonic setting of the hymn is Claudio Monteverdi’s setting in his Vespers of 1610; but many other composers, right up to the present day, have also set its seven stanzas. This hour we’ll listen to some of the captivating settings of Ave Maris Stella that were composed between the 15th and 17th centuries, and then top it off at the end with Monteverdi’s, from our featured release: the Dunedin consort’s 2017 recording of Claudio Monteverdi’s Vespers of 1610.

We heard two pieces from a CD called Laude Novella, by the Medieval Women’s Choir, recorded back in 2012 under the direction of the late Margriet Tindemans. First we heard the chant Ave Maris Stella, which is the theme of our program this week. That was followed by an arrangement of the piece from the medieval Faenza codex, which pairs the lengthened notes of the chant melody with a florid instrumental part.

The Faenza Codex is often thought of as one of the earliest keyboard manuscripts; but it is also sometimes possible to play the two “hands” of the instrumental part on two different instruments.

[music bed starts at regular volume, then fades and voice starts over it]

A hymn is a devotional song, usually consisting of a melody to which stanzas of text are set. In today’s Christian churches, the congregation usually sings that melody, often accompanied by the church choir and an organ. But that hasn’t always been the case. Before the Reformation, hymns were usually sung by a trained choir with the voices singing in composed harmony, to use the term a bit loosely. This hour we’re going to pay a visit to a hymn whose melody goes all the way back to the 8th century, called “Ave maris stella.” It’s not known for certain who composed this hymn, but it appears in many sources, from the earliest music that was written down, to the present day.

As might be expected, an old tune that appears so frequently, and traveled from one land to another with musicians singing by ear, is not exactly the same everywhere, differing by a note here and there, though it always remains recognizable. Our tune inspired composers throughout the ages to set it in different ways, from settings that alternate melody and harmony verse by verse, to instrumental versions, to through-composed pieces that hide the melody, to settings that retain the melody, sometimes more, sometimes less, to set the words of the entire Mass.

Our hymn is not complicated. It has seven verses of metrical Latin poetry; each line has six syllables and three of the lines rhyme. Here for instance, is the first verse:

In this poetic translation, the rhyme changes and we lose the 6-syllable line, but it says

The hymn presents the Virgin Mary as a merciful and loving mother. From her description as the “star of the sea,” it is not surprising that this hymn became a prayer for the safe conduct of travelers.

You won’t be hearing the original plainchant hymn again complete on its own. But don’t worry, you’ll hear all the words and the melody several times, as in this 15th century setting by Guillaume Dufay, in which the plainchant alternates with three-part settings stanza by stanza.

Now we turn to another famous Flemish composer, Josquin des Pres, who composed an entire mass in four parts based on Ave maris stella in the late 15th century. Let’s listen to the first of six sections of that mass, the section known as the Kyrie.

In our chronological journey, we’ll turn next to a Spanish composer working at the Cathedral in Seville in the early 16th century, Pedro de Escobar.

John Sheppard was appointed the choir director of Magdalen College, Oxford, in 1543--but then moved on, later in the decade, to become a Gentleman of the Chapel Royal. He composed a six-voice setting of Ave maris stella that we would not have, were it not for a set of partbooks that were copied after Sheppard’s death in 1558 by one John Baldwin.

At just about the same time in Italy, Girolamo Cavazzoni was working in Mantua, living in the shadow of Giovanni Pierluigi da Palestrina.  Apparently a close friend of the music-loving Guglielmo Gonzaga, Cavazzoni composed organ music and was organist at Santa Barbara in Mantua, where he also supervised the building of the organ.  How cool is it that we can listen to Cavazzoni’s setting of Ave maris stella being played on the very organ on which HE likely played it? Sensitive, historically-aware ears will also hear the uncompromised mean-tone temperament of the organ, which may well sound “out of tune” to some listeners--but it’s the way organs were tuned back then!

Did you notice that only one verse of our hymn was played? It is possible that the organ alternated with verses sung by the choir, just as earlier versions alternated chant and polyphony. We heard the Dutch keyboard player Liuwe Tamminga, in a recital from 2011 that was released by Accent under the title “Il ballo di Mantova: Organ Music in Santa Barbara, Mantua.

Our playlists, podcasts, and archived episodes are online at harmonia early music dot org. You can follow our Facebook page and our updates on Twitter by searching for Harmonia Early Music.

One reason for so many settings of Ave maris stella is its appearance in Vespers, a service of the Divine Office, which is a series of daily events completely separate from the Mass. Vespers is traditionally sung at twilight, at the time when lamps are lit indoors. Vespers includes the singing of a hymn, and on feast days of the Virgin Mary, of which there are many in the Catholic Church, Ave maris stella is the hymn that is sung. Any of the versions you hear might well find their way into Vespers.

This leads us to another titan of early music in Europe, the Elizabethan composer William Byrd. Byrd’s setting of Ave maris stella was published in 1605 in his last great body of music, the Gradualia, in which his overtly Catholic agenda and unshakeable faith are clearly on full display.

And now for something completely different: music by the Spaniard Juan García de Salazar. Notice that the chant is sung in a specific rhythm, just as it was in the Sheppard. The piece starts deceptively simply, then takes off in a different direction for each verse of the hymn, even at times including guitar and brass as accompaniment.

Ave Maris Stella, performed by Capilla Peñaflorida and the Ministriles de Marsias, conducted by Josep Cabré—from a recording of a reconstructed 17th-century Vespers, contemporary with Juan Garcia de Salazar’s music, on their 2006 Naxos recording Complete Vespers of Our Lady.

Our featured release this week is tied directly to our theme, and acknowledges another composer who worked in Mantua a bit later than Cavazzoni. Claudio Monteverdi composed what is arguably the most famous setting of Ave maris stella as part of his Vespers of 1610. This is from a 2017 recording of the Monteverdi Vespers by the Dunedin Consort, with His Majesty’s Sagbutts and Cornetts, all conducted by John Butt . . .  Monteverdi’s incomparable Ave maris stella.

From Monteverdi’s Vespers of 1610, one of the iconic masterworks of the early 17th century, his setting of the Ave Maris Stella, from our featured release: Vespers 1610, by the Dunedin Consort, with His Majesty’s Sagbutts and Cornetts, directed by John Butt, released on the Linn label in 2017.

Thanks to our studio engineer Michael Paskash and our staff –Wendy Gillespie and LuAnn Johnson. Additional technical support comes from KTTZ at Texas Tech University in Lubbock, Texas. 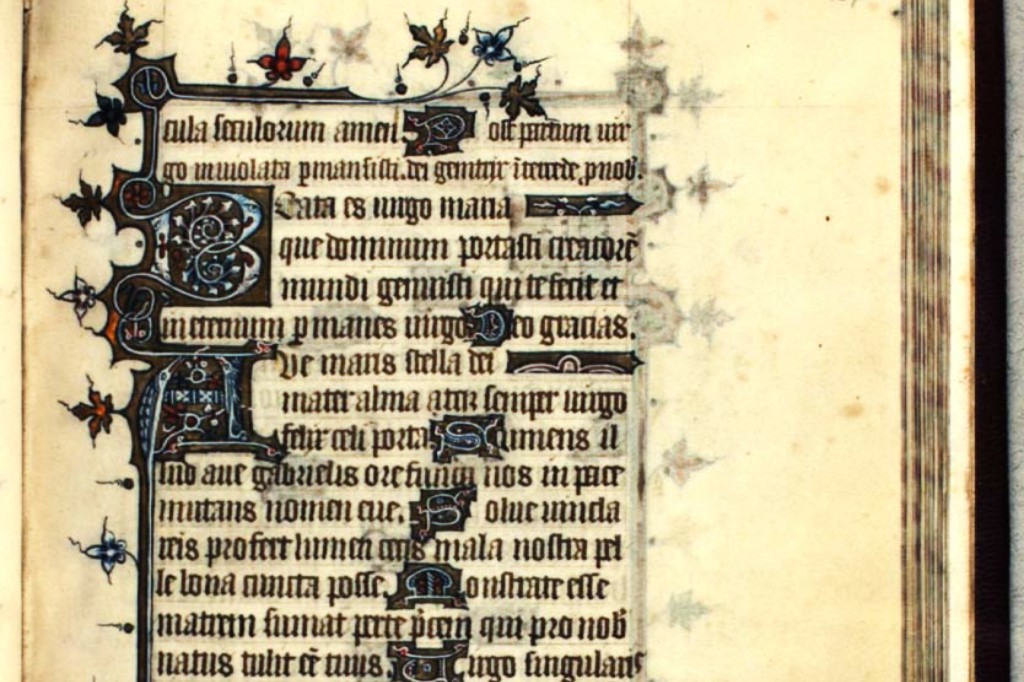 The 8th century hymn Ave maris stella--Hail! Star of the Sea--is one of the best-known examples of Marian chant, or in other words, chant associated with the veneration of Mary, the mother of Jesus. Probably the best-known polyphonic setting of the hymn is Claudio Monteverdi’s setting in his Vespers of 1610; but many other composers, right up to the present day, have also set its seven stanzas. This hour we’ll listen to some of the captivating settings of Ave Maris Stella that were composed between the 15th and 17th centuries, and then top it off at the end with Monteverdi’s, from our featured release: the Dunedin consort’s 2017 recording of Claudio Monteverdi’s Vespers of 1610.