There are several different kinds of musical pieces that can be described as a “quodlibet.” It could be a humorous list of items; or a piece in which well-known melodies and texts appear in successive or simultaneous combinations. The term is most frequently applied to a musical piece that takes several different tunes—usually tunes that are well-known to their intended audience—and mixes them together, usually in some clever contrapuntal way.  This hour on Harmonia we’re going to listen to German quodlibets from the fifteenth through eighteenth centuries. Plus, music from our featured release: Beyond Bach & Vivaldi: Rare Unaccompanied Works for the Baroque Violin, played by violinist Augusta McKay Lodge.

Violinist Augusta McKay Lodge played the first movement, “Con discretione,” of the Fantasia in C minor by Nicola Matteis, from the CD “Beyond Bach and Vivaldi: Rare Unaccompanied works for the Baroque Violin.”

The Collège de la Sorbonne, officially founded in 1257, required that its doctoral candidates undergo an intellectual gladiatorial contest called the disputatio, a solid twelve hours of rigorous oral examination.  When the idea travelled to Germany it became known as the disputatio de quodlibet, and there it evolved into a humorous parody featuring ridiculous lists of items loosely combined under an absurd theme, for instance, objects forgotten by a man leaving a brothel. The term quodlibet was first used in reference to music in 1544 in a German publication, and it generally indicated a composition in which well-known melodies and texts appear in successive or simultaneous combinations.

This hour on Harmonia, we’re going to explore Renaissance and Baroque German quodlibets, beginning with a couple of songs that date from before the first use of the word, but clearly illustrate the idea of tunes presented simultaneously. The first is from the Glogauer Liederbuch - not a single book, but a set of three part books copied around 1480. In the collection is a quodlibet that combines one of the most famous songs of the fifteenth century, Giustiniani’s ballata O rosa bella, as set by the English composer John Dunstaple, with a tenor part containing fragments of 22 different German songs.

That was John Dunstaple’s setting of O rosa bella in combination with fragments of 22 anonymous German songs, performed by the Joculatores Upsaliensis on their 1994 BIS recording Early Music at Wik.

The Missa Carminum, or “Song Mass,” might or might not have been composed by Heinrich Isaac, but it is another sort of quodlibet, in that it combines a number of well-known songs in the context of a traditional Mass proper. The tenor of the first Kyrie is to our knowledge an as yet unnamed song; the Christe employs one of Isaac’s most famous songs, Innsbruck ich muss dich lassen, and the second Kyrie quotes a tune called Bruder Konrad in its tenor:

The Kyrie from the Missa Carminum, from the 2009 Naxos release Lacrimosa geistliche Musik.

Here’s an early example of a more serious type of quodlibet – some musicologists will argue that this is not, strictly speaking, a quodlibet at all, but we at Harmonia are preferring to be a bit more inclusive. It presents two or more songs simultaneously rather than successively, and is by Ludwig Senfl, a student of Isaac. Senfl combines a sad German song about the parting of lovers with a very well-known sad Italian song about cruel fortune, Fortuna desperata. We’re encouraged to think about their symbolic connection, and experience both more poignantly:

Through the miracle of modern technology, you just heard Charles Daniels singing Ich stuend an einem morgan and Fortuna desperata simultaneously, with the viol consort Fretwork, in a song by Ludwig Senfl, from the 2004 Harmonia Mundi USA release entitled Im Maien.

In 1544, just after Senfl’s death, Wolfgang Schmeltzl first used the term quodlibet with specific reference to music in a publication including 25 such pieces. Let’s hear one of Schmetzl’s collection, performed by the Orlando Consort, that illustrates well the classic humorous German quodlibet. The text is all about eggs- Eier- a word you’ll hear over and over, both in the context of different kinds of eggs- goose, duck, pigeon, crab’s eggs, nest eggs, hare, calves’ eggs—and, ummm, “a big pair of eggs that belong to the farmer” – and, different ways of cooking eggs  - boiled, fried, stuffed - and of course one must eat them with salt! You’ll also hear the comical rhetorical use of repetition as each line begins “Wir haben” – “we have.”

And now for something completely different: an instrumental style of quodlibet based on a sort of mashup of borrowed bits of different pieces, often popular songs and tunes. This one is an orchestral piece in 17 movements; we will hear the first 6.  I’m not going to tell you who the composer is – yet, anyway—but it was composed in 1766.

Ars Antiqua Austria performed music composed by a 10-year-old Wolfgang Amadeus Mozart: the Galimathias musicum in D major, K. 32, premiered at the Hague in March of 1766. “Galimathias” is a rather archaic word; its English equivalent might be something like mishmash, hodgepodge, or gobbledygook—and in fact, two different versions of this work survive, in four manuscripts. More quodlibets coming up, as we go backward in time to Bach.

It’s nearly impossible to talk about German baroque music without mentioning JS Bach, who, being JS Bach, gave us some of the best known quodlibets of all. Bach did not necessarily require words for a quodlibet, but he elevates the form to new heights. At the end of the Goldberg Variations, he combines the underlying bass melody for the entire set of variations with two German folk songs, Ich bin so lang nicht bei dir g’west, and Kraut und Rüben in a virtuosic display of canon and even the simultaneous presentation of both halves of the latter song in a da capo aria. Some final notes of phrases seem slightly out of place as they come in at the wrong octave or in a different voice than expected, perhaps a bow to the humorous origins of the quodlibet.

We heard the quodlibet from the Goldberg Variations, BWV 988, played on the harpsichord by Christiane Jaccottet on the 2011 Carinco AG recording Goldberg Variations Aria mit verschiedenen Veränderungen from Part 4 of Clavier Übung, BWV 988.

Bach’s only other use of the traditionally light-hearted form of the quodlibet is in the Wedding Quodlibet BWV 524, an incomplete fragment composed around 1707, and not discovered until 1932. The text is a hodgepodge of absurdities and free-associations in German and Latin, including folksong, student song fragments, street cries, imitations of liturgy, parlor word games, sexual allusions, punning, musical imitations of the chaconne and fugue, deliberate mixing up of lines and parts, and quite a bit of word painting.  At least two of the present guests and a local brand of beer are mentioned in the text as well. So is the wedding time of 2:00 p.m., and the wedding location of the Golden Crown, where "Johannes" is summoned to attend on account of a young maiden. Some speculate the piece was written for Bach’s own wedding to Maria Barbara Bach, and that other members of the family were also involved in its composition.

We’ll stay on in Germany a bit, and then add England and Portugal to our travel itinerary for our featured release, Beyond Bach & Vivaldi: Rare Unaccompained Works for the Baroque Violin,  with soloist Augusta McKay Lodge. Nodding to French forms, Thomas Baltzar’s baroque pieces for solo violin create harmonies through chords and quickly played arpeggios—allowing the violin to function a bit more like a keyboard rather than melody instrument at times. Here are three movements by Baltzar: a Prelude, Sarabande, and Allemande.

Prelude no. 34 and a Sarabande and Allemande by Thomas Baltzar, played by violinist Augusta McKay Lodge, from our featured release, Beyond Bach & Vivaldi: Rare Unaccompained Works for the Baroque Violin.

A hallmark of unaccompanied works for solo instrument is their improvisational quality. Did the soloist come up with this sequence on the spot? Portuguese violinist and composer Pedro Lopes Nogueira probably performed these works himself, as well as teaching them to his more advanced students. Here is the Prelude and Fantezia in F fa ut, music attributed to Nogueira.

Composer-performers weren’t the only ones to notice and profit from the popularity of solo violin music in the seventeenth and eighteenth centuries. Famed London publisher John Walsh came out with an edition of Select Preludes or Volentarys for the Violin. Rather than bring forward newly-composed works, Walsh’s publication repackages parts of pieces that were already familiar. Here’s a Prelude in D Minor by Antonio Maria Bononcini from Walsh’s 1705 Select Preludes or Volentarys, music for solo violin.

That’s from our featured release this hour, “Beyond Bach and Vivaldi: Rare Unaccompanied Works for the Baroque Violin.”

Let’s end with the short but spirited third movement of Corelli’s Violin Sonata in A major, Opus 5 #6.

Movement 3, Allegro, from Corelli’s Violin Sonata in A major, Opus 5 #6, played by Augusta McKay Lodge, from the CD  “Beyond Bach and Vivaldi: Rare Unaccompanied Works for the Baroque Violin.”

The writer for this edition of Harmonia was Wendy Gillespie, with contributors Sarah Schilling and Angela Mariani. 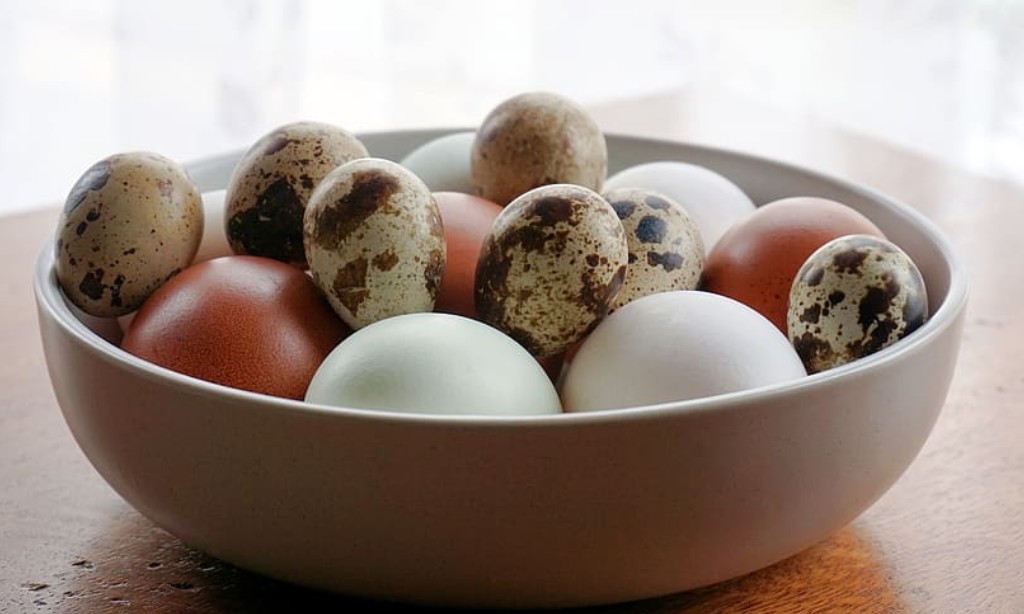 One humorous German quodlibet's text is all about eggs. "Eier" is a word you’ll hear over and over. (pxfuel.com)

There are several different kinds of musical pieces that can be described as a “quodlibet.” It could be a humorous list of items or a piece in which well-known melodies and texts appear in successive or simultaneous combinations. The term is most frequently applied to a musical piece that takes several different tunes—usually tunes that are well-known to their intended audience—and mixes them together, usually in some clever contrapuntal way. This hour on Harmonia we’re going to listen to German quodlibets from the fifteenth through eighteenth centuries. Plus, music from our featured release: Beyond Bach & Vivaldi: Rare Unaccompanied Works for the Baroque Violin, played by violinist Augusta McKay Lodge.