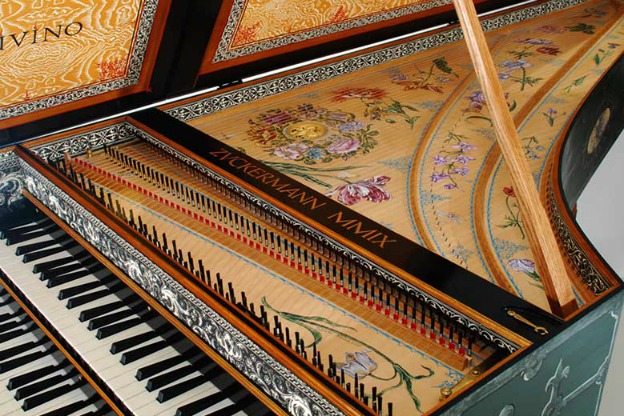 One of the most intriguing things about early keyboard instruments, and original period instruments in general is their lack of standardization. Of course, every instrument-modern, folk, period, traditional—has its own personality. But instrument personality is especially apparent in the many makes and models of keyboard instruments of the bygone eras-each bearing characteristics further defined by national lines: German harpsichords were different than French harpsichords which were different still from Italian and English models.  These keyboards also evolved incredibly fast resulting in instruments each with a unique “user interface”  and with distinctive subtleties of touch, action, timbre and sound.

Webb Wiggins and the Smithsonian Collection

Did you know that the Smithsonian National Museum of American History has in its Western classical music collection upwards of roughly 5,000 instruments? From that collection two 17th century Italian harpsichords are represented on a 2013 release from the FoM or “Friends of Music” recording label. Webb Wiggins plays pieces by Frescobaldi, Merula and others on a harpsichord built in Florence by Nicolaus Dequoco in 1694, as well as a 1693 instrument built in Rome by Giovanni Battista Giusti. Technical information on these instruments concerning size, range, and construction are detailed quite well in the booklet notes that accompany this disc.

Both instruments have that distinctive Italian sound—clear attack, quick decay, clean tone.  You can also hear the action of the jacks plucking the strings, un-dampened on these Italian models by the leather guides used in harpsichord construction elsewhere in Europe.

Arthur Haas and the Flint Collection

Late 17th and early 18th century instruments from Antwerp and Paris feature in another 2013 recording. This one, released by Plectra Records, features Arthur Haas performing Rameau’s Pieces de Clavecin on the 1627 Ioannes Ruckers and 1707 Nicolas Dumont harpsichords from the Flint Collection.

Variations in stringing and construction lend these instruments a more nasal and sustained sound then either of the Italian models. Flemish Ruckers harpsichords were among the first instruments to be built with a two manual keyboard. French harpsichord builders soon adapted the model for their own instruments. The second manual is desirable in these harpsichords for use an expressive tool-the upper and lower manuals providing quick changes in color, dynamic, and sound quality between the two contrasting registers.

We have featured both the Dumont and Ruckers harpsichords on the Harmonia Early Music podcast before.  To hear that episode, click here: Exploring the Clavecin.