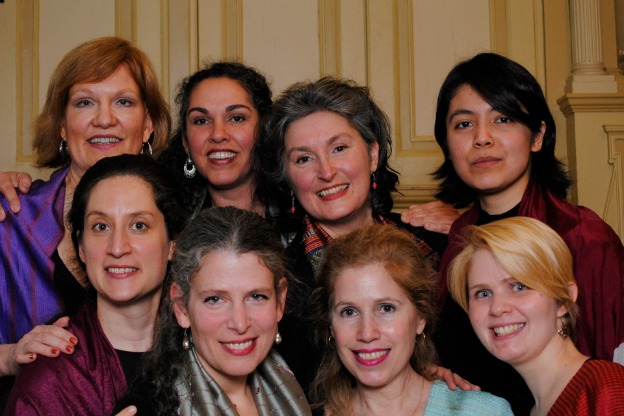 The further back we go in history, the less we know how the music of that era may have sounded.

Today's concept of medieval music is based on a sort of educated speculation from rare manuscripts, literary descriptions, iconography and other circumstantial evidence. The transmission of medieval music from all-the-way-back-then until the here-and-nowÂ is also complicated by the fact that notation systems for music were just beginning to develop; the effort to visually document and represent musical ideas and intentions in a standardized way was still a long time coming. There are extant versions of pieces from this era that do survive in manuscript, but much music was also handed down by oral tradition. Add to this the ubiquitous practice of improvisation, and we are left quite naturally with ever evolving possibility in the medieval repertory.

This is especially true in the development of polyphony. By the 13th century, musicians were adding extra parts to monophonic plainchant creating 2, 3, or even 4 voiced polyphony. There were different rules for improvising or creating polyphony through various kinds of organum, troping, and the like, in a system that was likely second nature to medieval musicians.

The MontrÃ©al based female vocal group, Ensemble Scholastica has devoted themselves to learning and applying these medieval musical methods and practices, and can be heard on a new CD from ATMA Classique. Specifically, their recording Ars Elaboratio focuses on the medieval practice of elaboration.

Ensemble Scholastica focuses less closely on how to reproduce a definitive version of a surviving work in a particular manuscript, and instead aims to recreate a medieval musician's process.Â As such, they have taken liberty to adapt pieces from the liturgical chant repertoire, and, following medieval rules, composed several of their own polyphonic versions of surviving monophonic pieces. New versions, that is, new works sung according to the practices and principles of the medieval period thus combine with the old and codified.

As an example, certain parts of the medieval mass were sometimes elaborated by the addition of tropes-new melodies and texts inserted between phrases of the original chant. Ensemble Scholastica employs this practice in their performance of Quinque prudentes virgines.Â First, they sing it all the way through, and on the repeat, add their own newly composed tropes using another existing 12th century text.

The text of Quinque prudentes virginesÂ retells the biblical parable of the five wise virgins, and Ensemble Scholastica's added tropes draw from the Speculum Virginum which served as a guide for female monastic life in the Middle Ages. This and many of the other tracks on this CD reflect a woman-centric program including the musical homages to the ensemble's namesake, Scholastica in Celsa secreta, to Cecilia the patron saint of music in Cantantibus organis, and to Catherine of Alexandria, champion of justice and female wisdom in Dilexisti iustitiam. In the Velox impulit, Ensemble Scholastica uses a melisma on the word mulierum from music the feast of St. John the Baptist as the tenor line over which the ensemble composed three more new parts to make an original four-voice motet.

Another piece on the program, the Alleluia. Adducentur regi virgines was sung for the feasts of several female saints. In the Alleluia, Ensemble Scholastica also demonstrates the practice of double organum according to the 12th and 13th century Notre Dame style of polyphony. In double organum, each note of a plainchant is held while another voice improvises a florid line above it.

The ensemble takes organum a step further with their elaboration that uses three-voiced organum in the style of the famous Congaudeant Catholici, the first known composition for three voices, and one of the only mid-12th century pieces with surviving organa with more than two vocal lines.Â There is some question among scholars if all three voices of Congaudeant Catholici were actually meant to be sung at once, but Ensemble Scholastica has taken an affirmative stance on the matter.Â Using Congaudeant Catholici as their model, the ensemble elaborates another 12th century piece, Ad sit Johannis baptiste first with two voices, and then with three.

Founded in 2008, Ensemble Scholastica is comprised of all female singers. But beyond the purely vocal music, a few tracks on this disc also feature members of the ensemble doubling on viele, psaltery, and symphonia, including one improvisatory track for solo organetto.