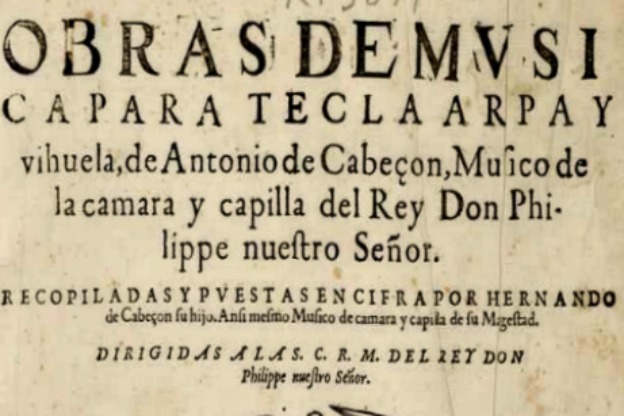 The bulk of the surviving compositions of 16th century composer, Antonio de CabezÃ³n, can be found in the Obras de MÃºsica. It's an impressive collection: one sizeable volume comprising 400 pages assembled by Antonio's son, Hernando. The collection came out in 1578, two years after the elder CabezÃ³n passed away.

The title page of the Obras de MÃºsicaÂ indicates that the pieces in it would be suitable for performance on keyboard instruments, harp or vihuela. Â But they can also translate very easily into ensemble pieces for multiple instruments-each adopting a different line of the polyphony.

This is what the ensemble Doulce Memoire has done on their 2013 Ricecar release.

Many of the pieces in the Â Obras de MÃºsica areÂ actually modeled on vocal song. CabezÃ³nÂ used songs by the most eminent composers in Europe of his day including Josquin, Gombert, Willaert, Lassus and others. A really nice touch on this recording from Doulce Memoire is the inclusion of original vocal models-sung byÂ sopranoÂ Clara Coutouly-alongsideÂ CabezÃ³n's instrumental decorations of them.Â

In 2012, Brilliant Classics released a complete 7 disc set of the Obras de MÃºsicaÂ compiled from recordings made between 1995 and 2010 on which keyboardist, Claudio AstronioÂ performs pieces by Cabezon on harpsichord, organ and regal.

Cabezon himself was an organist, and though blind from birth, worked as a musician in the Spanish court under Isabelle and Phillip II. About a quarter of the Obras de MÃºsicaÂ is devoted to liturgical music. These pieces gives us a good idea off the kind of functional music that a church organist in that time and place would have played.

It's impossible to talk about Antonio de CabezÃ³n's contribution to the instrumental repertory without mentioning his tientos. The tiento is generally thought of as the Spanish parallel of the Italian ricercar. While they started out as free and improvisatory works, by CabezÃ³n'sÂ time, the tiento evolved more and more into a piece of the so called polyphonic â€˜motet style' utilizing fugal entries, imitative counterpoint and formal organization. There are fourteen of Cabezon's tientos in the Obras de musica. The opening his first tiento is oddly enough similar to the theme of Bach's Art of Fugue-though we can probably just chalk that up to coincidence!