All the Way 'Round to Bach

Welcome to Harmonia . . . I’m Angela Mariani. This hour, the last in our series of four programs about canon and fugue in music from the medieval period to the high Baroque. We devote this last installment completely to Johann Sebastian Bach, who stands on the shoulders of previous musical giants to take the fugue and canon to magisterial heights.  Stay with us for an appreciation of Bach’s mastery of contrapuntal technique, combined with his musical genius. Plus, later in the program, we’ll continue our Bach theme with our featured release, the Dunedin Consort’s beautiful 2018 recording of Bach’s B Minor Mass.

Music of Johann Sebastian Bach: the Prelude and Fugue XVI in G minor, BWV 885, from book 2 of the Well-Tempered Clavier, transcribed for 4 viols and played by Fretwork, from a CD called Alio Modo.

Mike: I recorded this backannounce twice: one at my normal pace, and then, in case that was too long, at the K-Tel “Order by Midnight So You Won’t Forget” speed.

In the course of 3 earlier Harmonia programs about rounds and canons—the musical kind, not the artillery-- we’ve discovered that “canons” and “fugues” have histories that are closely intertwined, and even traded names at one point. On this final program, canon and fugue will come together once more, for what many would say are their greatest moment--in the music of Johann Sebastian Bach, standing astride the shoulders of all those musical giants that preceded him.

When you think “Johann Sebastian Bach” and “fugue,” what comes to mind?   Perhaps “Prelude and Fugue” – that collection in all the keys?  Ah yes, the Well-Tempered Clavier, or WTC, books 1 & 2.  They are sometimes affectionately called “The Forty Eight,” because each volume contains a prelude and fugue in the major and then the minor key of each of the twelve notes in the octave—in total, 48 preludes and fugues. “Clavier” means keyboard, not specifically harpsichord or piano or clavichord or organ, and any of these instruments would be able to pull this off, though with very different results.

Here’s the Fugue in F Major from the second book of the Well-Tempered Clavier.

Readers of Vikram Seth’s 1999 novel An Equal Music may immediately think instead of Bach’s Art of Fugue.  I’ll bet even if you’ve never read the book that you recognize this theme, and I’ll bet that even if you don’t recognize it, you’ll hear the four successive entries when I play you the first of 19 contrapuncti, as Bach calls them.

That was the first Contrapunctus from Bach’s Art of Fugue, performed on the harpsichord by Robert Hill on his 2005 Hännsler Classic CD Kunst der Fugue.

Isn’t it interesting that Bach calls the fugues “contrapuncti,” and not fugue?  And equally interesting that a collection called Art of Fugue – and we’re not even sure whether that is Bach’s title or someone else’s – is comprised of canons and contrapuncti?

(Fade in next track under the next two sentences of the VT; fade up after voice finishes, and play until over.)

The famous Bach portrait by Elias Haussmann from 1746 shows the composer holding the manuscript of a canon triplex (BWV1076). Carefully reproduced in the painting, the canon was composed at Bach’s initiation into the Society of the Musical Sciences. (music plays to end)

And that is but the tip of the Bach canon iceberg, because he uses canon very often.

Here is a very much more sophisticated canon from Art of Fugue, called a “Canon per augmentationem in contrario motu,” or “Canon by augmentation in contrary motion.” We hear the melody in the top voice; then after 4 bars, the bottom voice begins playing the same melody down a fourth, half as fast, and - get this – upside down! In the middle of the piece, the parts switch and the bottom part now has the original melody and the top part then joins up a fifth, half as fast, upside down. Though keyboard seems the likeliest instrument for Art of Fugue, even the original print by CPE Bach has separate staves for each part, and each can be played on a single line instrument, be it a saxophone or a viola da gamba.

Members of Fretwork performed the Canon per augmentationem in contrario motu on their 2010 Harmonia Mundi recording of Art of Fugue.

So Bach seems to be thinking of canon in the same way that his predecessors did: a canon is a solution, sometimes purposely mysterious, for how to add parts to an existing piece.

The Musical Offering consists of 10 different canons with puzzles to be solved, in the great tradition of puzzle canons of the renaissance. Here, for example, is one called Canon circularis per Tonos. You’ll hear the theme, played on the violin, ending in such a way that it begins again a step higher each time, so in theory we have a canon that spirals up into the stratosphere.

Not a lot of “Row row row your boat there, eh? Now we are hearing Bach at his trickiest. He can hide canons in the middle of fugues, as you will possibly hear in this short excerpt of the “Confiteor” section of the Credo from Bach’s B Minor Mass.  Listen for a section with a strict canon in long notes between the alto and bass voices, hidden in the middle of a section almost entirely made of fugal entries and imitative counterpoint.  This is the Bach Collegium Japan.

. . . a masterful example of imitative counterpoint in that short excerpt from the “Confiteor” section of the Credo of Johann Sebastian Bach’s B minor Mass, performed by the The Bach Collegium of Japan under the direction of Masaaki Suzuki. We’ll be back after a short break with more music of J. S. Bach.

Harmonia is a program of early music that comes to you from the studios of WFIU at Indiana University. Support also comes from Early Music America, fostering the performance, scholarship, and community of early music…on the web at EarlyMusicAmerica-DOT-org.  I’m Angela Mariani.

Welcome back to the last of four Harmonia programs featuring rounds, canons, fugues, and in this case, a ricercar. That’s the name Bach gives this piece from his Musical Offering. We heard ricercars in the sixteenth and seventeenth centuries that were an important ancestor of the classic fugue—and it’s easy to imagine Bach, using the long and complex musical theme given to him by Frederick the Great, paying tribute to his predecessors.

Fretwork played the Ricercar for 6 from the Musical Offering on their 2005 Harmonia Mundi USA CD entitled Alio modo.

But let’s go out with a fugal bang! Bach’s Clavier-Übung III, sometimes referred to as the German Organ Mass, is a collection of compositions started in 1735–36 and published in 1739. It is considered Bach's most significant and extensive work for organ, containing some of his most musically complex and technically demanding compositions. The fugue in E♭ major that ends Clavier-Übung III has become known in English-speaking countries as the "St. Anne," because of the first subject's resemblance to a hymn tune of the same name by William Croft, although that tune was not likely known to Bach.

This is an enormous fugue—a triple fugue, in fact, in three sections of 36 bars, 45 bars and 36 bars, with each section a separate fugue on a different subject. The form of the fugue conforms to that of a 17th-century three part ricercar or canzona, such as those of Froberger and Frescobaldi—the themes become progressively faster in successive sections; and one theme transforms into the next.

What a spectacular ending! We heard the organist James Pressler playing the so-called “St. Anne Fugue” in what was in 2007 a new temperament that Bradley Lehman proposed based on his interpretation of the squiggles on the title page of the Well-Tempered Clavier. The CD is called “The Temperamental Bach,” and it was issued by Frog Music in 2008.

And now to our featured release, John Butt and the Dunedin Consort’s 2018 Linn recording of the B Minor Mass. In this last installment of our series on rounds, canons, and fugues, we took a completely unscientific survey of favorite Bach fugues, or canons that have words. It’s not completely surprising that one of the most frequently performed of Bach’s works, the B-Minor Mass, kept appearing in different guises.  However, the Kyrie is mentioned most often as a favorite vocal fugue, and in fact, thanks to Bach, we get to hear it both instrumentally, and vocally.

John Butt led the Dunedin Consort in the Kyrie from Bach’s Mass in B Minor on their 2018 recording of the Mass on the Linn label.

The Dunedin Consort’s recording of the Bach B minor mass is our featured release this hour on Harmonia. It makes sense, considering our fugal and canonic theme, to end with the final Dona Nobis Pacem.

Dona nobis pacem, the end of Johann Sebastian Bach’s B minor mass, performed by the Dunedin Consort, directed by John Butt, from a 2018 release on the Linn label. 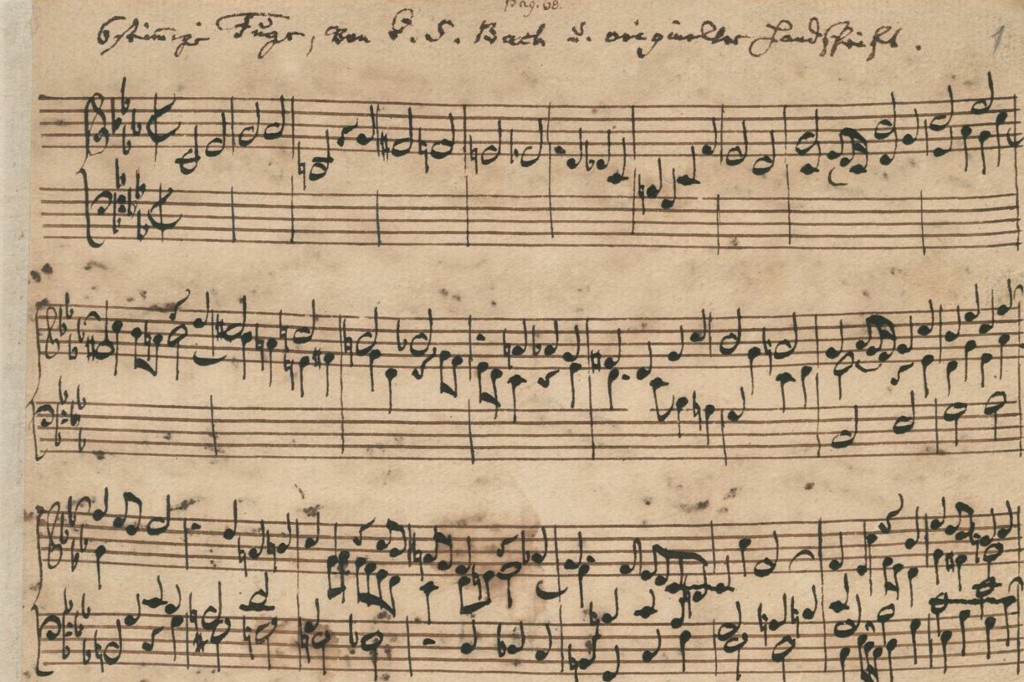 Detail from the first page of the manuscript of the "Ricercar a 6" BWV 1079 by Johann Sebastian Bach, 1747. (Berlin State Library, Germany)

The last in our series of four programs about canon and fugue in music from the medieval period to the high Baroque. We devote this last installment completely to Johann Sebastian Bach, who stands on the shoulders of previous musical giants to take the fugue and canon to magisterial heights.

Stay with us for an appreciation of Bach’s mastery of contrapuntal technique, combined with his musical genius. Plus, later in the program, we’ll continue our Bach theme with our featured release, the Dunedin Consort’s beautiful 2018 recording of Bach’s B Minor Mass.