Welcome to Harmonia. I’m Angela Mariani.  Avast, early music fans! It’s pirate week, and we’re plundering centuries of music to bring you tuneful treasures with a link to the ocean-going villains of the past.  For Renaissance, Medieval, and baroque composers, piracy was more than a movie franchise.  It was a serious hazard, one composers grappled with in their lives and in their music. We’ll explore music with a pirate connection this hour.  And we’ll counter all that pillage with a plea for peace, sampling “Peace in Our Time,” a brand new release commemorating the 400th anniversary of the start of The Thirty Years’ War from Bay Area ensemble Agave Baroque and countertenor Reginald Mobley.

Music by famed keyboard composer Johann Jakob Froberger, arranged for violin and viola da gamba and performed by Duo Coloquintes. Froberger, a frequent traveler who studied in Rome and toured widely through Europe, was also a pirate victim: Robbed on his way from Calais to Dover in 1653, he arrived in London penniless.

In this day in age, pirate fans ARE everywhere.  We’ve got Johnny Depp swashbuckling his way through movie after movie, pirate-themed birthday parties for little kids, even an International Talk Like a Pirate day.

But the pirates of previous centuries were no mere amusement park ride. Piracy was big business, and serious hazard up and down the coasts of Europe.  In music of the time, pirates appear as major characters, minor characters, even real-life menaces.  They also appear as metaphors, as we’ll hear in this consort song by the English Composer William Byrd.

The song is titled “All as a Sea,” and in the second verse, Byrd compares passions to pirates, walking logic off the plank!

Our passions be Pirates still that spoyle,
and overboard cast’s out our reasons fraight:

Let’s listen to a recording by The English Consort of Viols with James Bowman.

Songs and Fantasies from the 16th and 17th Centuries
The English Consort of Viols and James Bowman
Countdown Media GmbH 2008 B001NAZUME
William Byrd
Track 6: All as a Sea (3:14)

“All as a Sea,” by William Byrd, recorded by James Bowman and The English Consort of Viols.

Byrd dealt with pirates in song, but seventeenth-century German composer Johann Jakob Froberger had to face them in real life. Froberger, born in Stuttgart in the early 1600s and appointed court organist in Vienna, became one of the most revered keyboard composers of his day, touring and performing throughout Europe.  It was on a trip to London that Froberger fell victim to pirates, who robbed him during the passage between Calais and Dover.

As composers do, Froberger turned to music, immortalizing the events in “”Plainte faite à Londres pour passer la melancholie,” the programmatic opening movement of his Suite no. 30.   Let’s listen to this pirate-inspired piece, interpreted here by the Italian Harpsichordist Sergio Vartolo.

Save for two motets featuring singers and instruments, all of Froberger’s  compositions  were for keyboard.  But that doesn’t mean that players of other instruments shouldn’t be able to plunder his pieces!  A recent CD by Duo Coloquintes, does just that, taking as its jumping off point transcriptions of Froberger’s music found in a manuscript in the Wolfenbüttel library, the Ludwig Partiturbuch.  Rescored for violin and viola da gamba, Froberger’s music is recognizeable yet completely transformed- a fine piracy indeed!  We’ll hear two movements from his suite,  “Auff die Mayerin.”” a sarabande and a courante.

Froberger wasn’t the only important cultural figure captured by pirates. In 1575, author Miguel de Cervantes was seized by Barbary pirates and taken to Algiers where, for five years, he toiled as a slave.  Eventually ransomed, he went on to tell and retell his story, including, some argue, in his masterwork Don Quixote.

Dispatches from the musical world of author and pirate victim Miguel de Cervantes, as interpreted by Jordi Savall and Hesperion XXI. We heard an anonymous instrumental work, El Villano.  And before that, “De La Dulce Mi Enemiga,” a villancico by Gabriel Mena.

Harmonia is a program of early music that comes to you from the studios of WFIU at Indiana University. Partial support for Harmonia comes from PENN-CO incorporated of Bedford, Indiana. Partial support also comes from Early Music America, fostering the performance, scholarship, and community of early music…on the web at EarlyMusicAmerica-DOT-org.  I’m Angela Mariani, and this is PRI, Public Radio International.

Opera is no stranger to swashbuckling, and Baroque opera has its own share of brigands.  We’ll begin the second half of our program with music from Georg Frideric Handel’s opera Imeneo, in which pirates kick off the plot.

The scene: a beautiful Athenian garden.  Tirinto is pining for his lost love Rosmene, who has been captured by –who else?- pirates.  In the aria “La mia bela, perduta Rosmene,” he rues her loss.  We’ll hear Europa Galante under Fabio Biondi, featuring Ann Hallenberg.

Pining for a love lost to pirates- that was “La mia bela, perduta Rosmene,” an aria from Handel’s Imeneo recorded by Europa Galante.

Perhaps no present-day early music group has gotten into the pirate spirit so thoroughly as the English ensemble Red Priest.  The CD cover of their album, “Pirates of the Baroque,” features ensemble members in full pirate gear, hawking their “colorful chest of stolen musical jewels.”

None of the music was written for group’s instrumentation of recorder, violin, and continuo- but that hasn’t stopped the ensemble. We’ll hear a tambourin yanked from the French composer Jean-Marie Leclair.

There must be something about playing the recorder that encourages pillage.  In her album Piracy: Baroque Music Stolen for the Recorder,” Australian musicians Genevieve Lacey and Linda Kent loot some of the baroque’s better numbers.  How does Purcell’s famous tune “Music for a While” sound on the recorder?  We’ll find out.

Music from the album Piracy: Baroque Music Stolen for the Recorder, featuring Genevieve Lacey and Linda Kent.  We heard “Music for a While,” by Henry Purcell.

After all that piracy, how about some peace?

“Peace in Our Time” is the title of our featured release this hour, a recent album from Bay Area ensemble Agave Baroque, in collaboration with countertenor Reginald Mobley.  2018 was the 400th anniversary of the Thirty Years’ War, a bloody conflict that devastated parts of Europe and significantly reduced the population of German states.

And yet, music continued in the shadow of the war, as it does in today’s turbulent times.  “Peace in Our Time” gives voice to some of that music, featuring the work of composers whose lives, in some way or another, were entwined with conflict.

Let’s sample some tracks from “Peace in Our Time.”  First, a fantasia by Mattias Weckman, a student of Heinrich Schutz.  Originally for solo organ, the piece was arranged for Agave Baroque by its keyboard player, Henry Lebedinsky.  After that, we’ll hear Johann Cristoph Bach’s “Lamento Ach, daß ich Wassers genug hätte.”  Johann Cristoph was the son of J.S. Bach’s Great Uncle, and his lament evokes, according to the group, “the despondency of a generation ravaged by war.”

Music from our featured release this week, an album entitled “Peace in Our Time” by Agave Baroque in collaboration with the countertenor Reginald Mobley.  We heard Johann Cristoph Bach’s “Lamento Ach, daß ich Wassers genug hätte.” And before that a fantasia originally for solo organ by Matthias Weckmann.

More music, stories, history, recordings, and other information about the world of early music can be found on our Harmonia Early Music Podcasts, online at harmonia early music dot org and through iTunes. 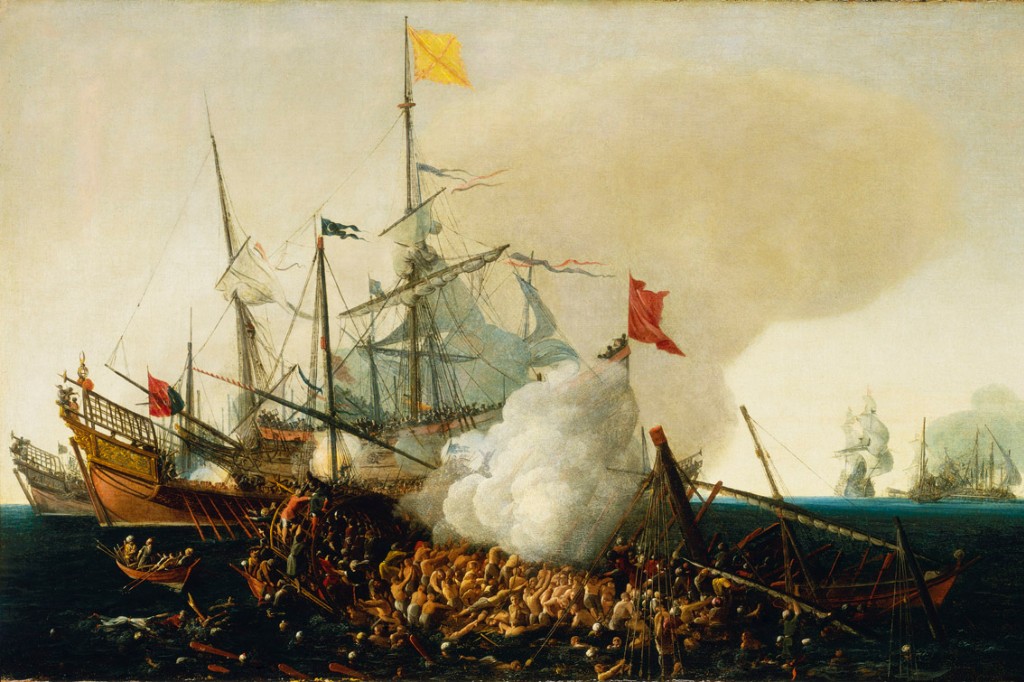 It’s pirate week, and we’re plundering centuries of music to bring you tuneful treasures with a link to the ocean-going villains of the past. For Renaissance, Medieval, and baroque composers, piracy was more than a movie franchise. It was a serious hazard, one composers grappled with in their lives and in their music. We’ll explore music with a pirate connection this hour. And we’ll counter all that pillage with a plea for peace, sampling “Peace in Our Time,” a brand new release commemorating the 400th anniversary of the start of The Thirty Years’ War from Bay Area ensemble Agave Baroque and countertenor Reginald Mobley.

Songs and Fantasies from the 16th and 17th Centuries
The English Consort of Viols and James Bowman
Countdown Media GmbH 2008 B001NAZUME
William Byrd
Track 6: All as a Sea (3:14)