Young Farmers Speak Up on the New Farm Bill 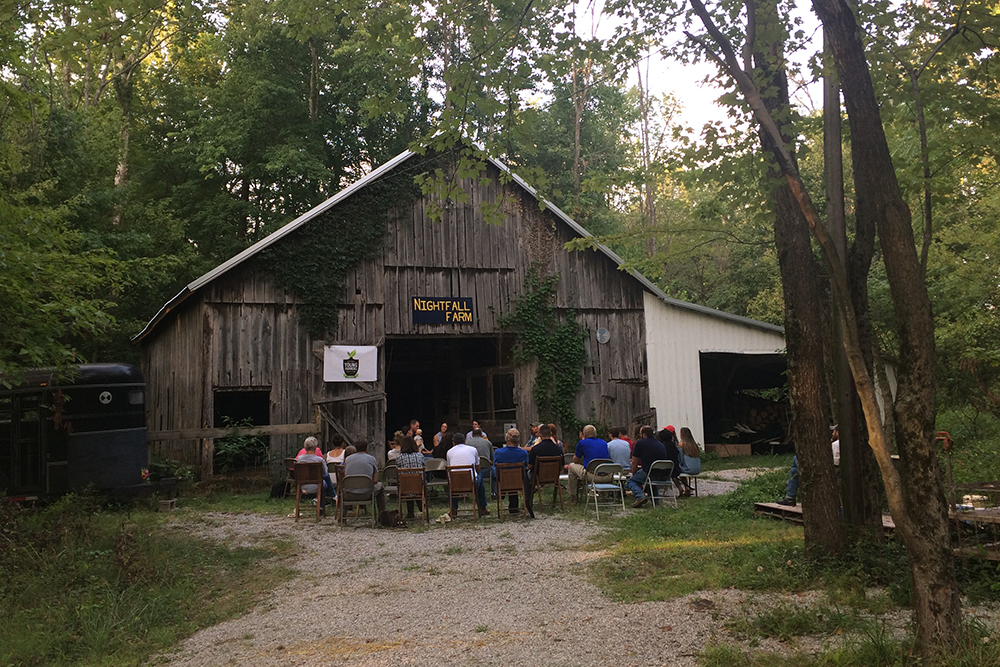 Today on our show, young farmers raise their voices in time for the upcoming Farm Bill and Chef Daniel Orr shows us how to make pizza with fall greens. And bacon.

The Hoosier Young Farmers Coalition  (The Indiana chapter of a national organization) works to recruit, support and promote young and beginning farmers throughout the state of Indiana.

Their mission states: We seek to create a lively network of young farmers and their allies, and to collaborate in making our food systems more localized, sustainable and just.

The Hoosier Young Farmers Coalition organized a community round-table discussion in late August, at Nightfall Farm near Crothersville, Indiana. They invited young and beginning farmers from across the state to share their concerns about the upcoming Farm Bill with Kent Yeager, the Agriculture Liaison for Indiana Senator Joe Donnelly.

Here's a little background on the Farm Bill. It is an multi-year law that governs agriculture and food programs. The most recent Farm Bill from 2014 covered issues from farm commodity price and income supports, to foreign food aid, to Domestic Nutrition Assistance (also know as food stamps or SNAP). It is renewed every 5 years or so, which provides a chance for policy makers to regularly address agriculture and food issues.

The 2014 farm bill expires in 2018, so congress will soon be crafting a new one. Indiana Senator Joe Donelly sits on the Agriculture committee. I attended the round-table event where young farmers were speaking with Senator Donnelly's Agriculture Liaison  about their concerns for the new farm bill.

Genesis McKiernan-Allen: I'm part of a panel of farmers who are here to talk about successes and challenges that we've had in Indiana as young and beginning farmers. And to hopefully voice some of the things that have helped us and some areas where we could use more help from the 2018 farm bill. Unfortunately Senator Donnelly is not going to be able to be here but we are excited to be able to talk directly with his Ag Liaison, Kent Yeager and hopefully get some of our concerns, some of the voices of the smaller scale, organic production, lift those up, to people who are working to make some policy happen.

Kayte Young: What are some of the things that you would like to see happening in the latest iteration of the farm bill that's taking shape?

McKiernan-Allen: I think at the very baseline I'd like to see a lot of the programs from the 2014 farm bill continued. There's been a lot of great programs that have come down through the beginning farmer and rancher development program, a lot of money that has been available to help start up farmers get training, find mentors, access other farms to help build the skills base and build the knowledge base for people who are stepping into farming who maybe don't come from a farming background.

Young: Some of that funding that McKiernan-Allen mentioned goes to land grant universities, like Purdue, and has supported the group hosting the Roundtable event at Liz and Nate Brownlee's Farm in Crothersville Indiana.

Liz Brownlee:..and in fact those dollars are part of what brings us here tonight, the grant that Purdue had helps, they gave us a mini grant to launch the Hoosier Young Farmer's Coalition, so it's between that and SARE, which is another USDA Farm Bill program, we have a grant from SARE right now, too, that's letting us actually do things, not just on a shoe string, but to be able to say ‘we need an agri-tourism banner' okay, let us buy one ‘we want to host events all around the state' okay let's do that and try to get this ship rolling, or sailing-- get this ship sailing because the average Indiana farmer is 54 years old. And if we don't have specific things in the farm bill, tailored to getting more people in these seats and around this table, then we're in trouble.

Listen to the podcast for the full story, and to hear Kent Yeager's predictions of how the Farm Bill might progress.

Then, Chef Daniel Orr walks us through a pizza recipe using rainbow chard (stem to leaf) and local goat cheese.

FDA: Do Not Eat Contaminated Produce After Irma

The FDA is warning people in flood zones to stay away from produce touched by flood waters as damage estimates in Florida take shape.

One rural Kansas community gets creative after the closing of its only grocery store.