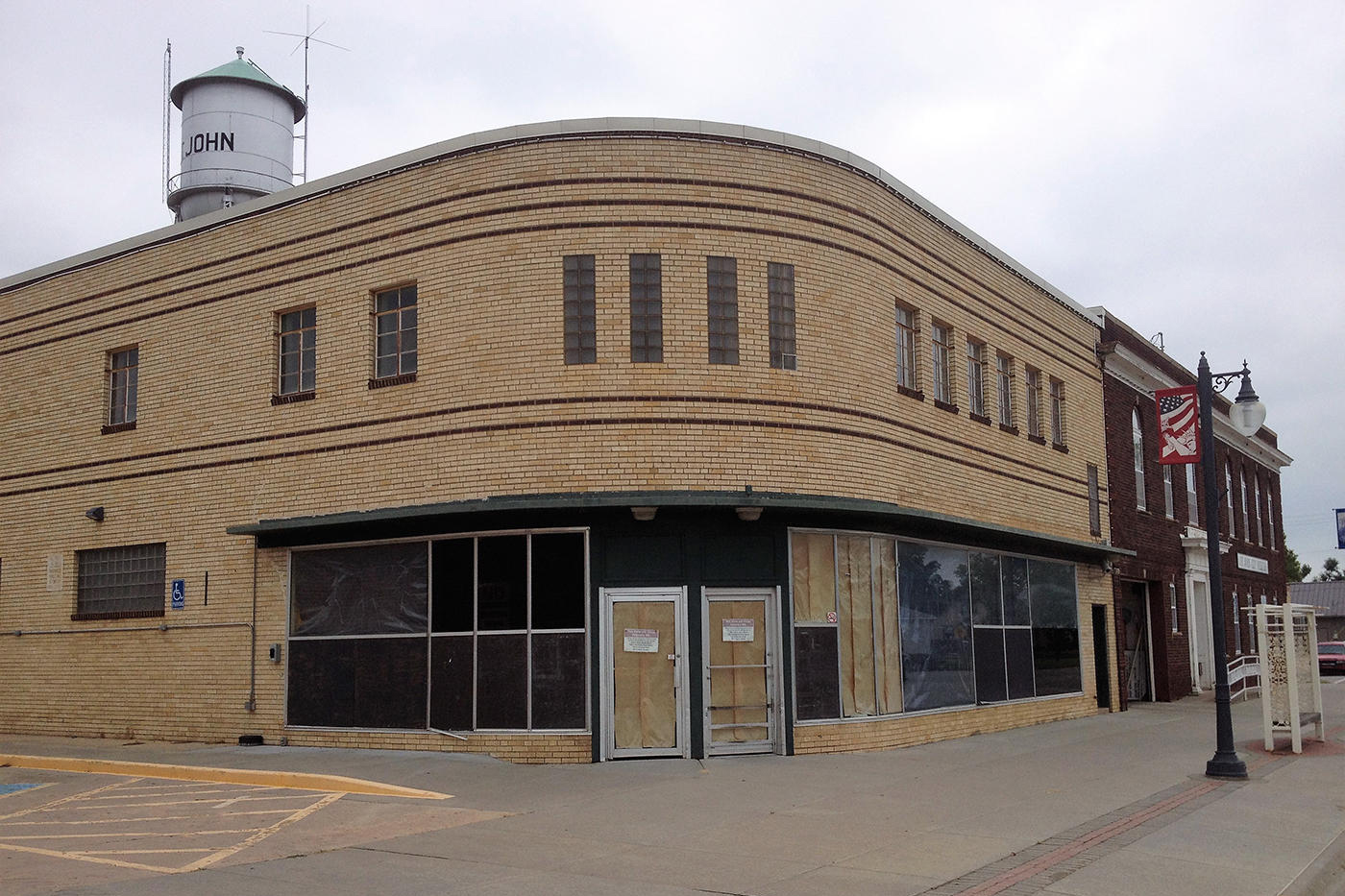 A brick building that was the only grocery store in St. John, Kansas, sits vacant, its glass doors covered with paper since it closed early last year.

St. John is the county seat of Stafford County in south-central Kansas, but it's home to fewer than 1,300 people. Today, the closest grocery store is 12 miles away, in Stafford.

"Now, when we make a trip to the grocery store we are planning four, five â€¦ six days out in advance," she says, "so you have to be much more efficient."

For that and many other reasons, Collins and other St. John residents want to bring a grocery store back to town.

Many cities and towns in rural areas have similar stories. More than 40 grocery stores in rural Kansas have closed during the last nine years as small-town populations shrink and supermarkets in bigger cities attract shoppers from miles away.

Carolyn Dunn, executive director of Stafford County Economic Development, is leading the effort to bring a grocer to St. John.

The initial plan was to find a new grocer to occupy the former Dillons building. But Dunn said two feasibility studies have shown that building simply is too small to offer the kind of variety customers want.

"I eat kale now, and I didn't as a kid," Dunn says. "So we need a store that offers some kind of approximation to what they can get in bigger areas in order for it to have long-term success. It requires a new store."

Dunn said the feasibility studies found that a much larger store in St. John would be far more likely to keep grocery shoppers from traveling to supermarkets in cities like Great Bend and Pratt, both almost 30 miles away. The studies project that a new store that is triple the size of the one that closed would generate far more sales over a 10-year period than the smaller store - $16 million more.

In addition to the larger grocery operation, plans for the new store include fuel sales with a discount for people who buy groceries there, and a pharmacy, something St. John has lacked for a generation.

White's Foodliner, which operates four grocery stores in rural Kansas and Oklahoma, has signed a letter of intent to operate such a store for 10 years if Stafford County Economic Development can provide the building.

Dunn has put together a financing plan for the $3 million needed for the building, parking lot and equipment.

Foodliner would pay $55,000 a year in rent for the use of the building. The economic development agency helped create a tax increment finance district that would provide about $70,000 a year from the growth in property and sales taxes the new store is expected to generate, and St. John city officials have agreed to contribute $50,000 annually from the local sales tax.

On top of that, Dunn has collected donations from some foundations and local contributors, although she's looking for more.

The make-or-break puzzle piece, however, is the potential for an $800,000 community economic development grant from the U.S. Department of Health and Human Services.

One of the goals of that grant program is to provide jobs in impoverished areas, Dunn said. Stafford County has a poverty rate of almost 29 percent - more than double the average state and national rates - and the new store is slated to generate 33 to 36 full-and-part-time jobs.

Dunn said HHS has provided grants through the program to finance other grocery stores, so she is hopeful the St. John proposal will be approved. She anticipates getting an answer from federal officials about the grant by the end of September. Without that funding, Dunn says, the whole project is likely to collapse.

U.S. Sen. Jerry Moran of Kansas has another idea for getting grocers to build or expand in what are commonly known as food deserts â€“ areas without access to healthy food nearby â€“ like St. John. The Kansas Republican is co-sponsoring a Senate bill introduced earlier this month that would offer federal tax credits and grants to businesses and non-profits designated by the government as "Special Access Food Providers."

"If this incentive is in place, it creates a greater opportunity for local folks to encourage, support, recruit and then be customers of a grocery store," Moran said during a recent visit to Great Bend.

One town over from St. John, in Stafford, the mom-and-pop grocery store has been chugging along for 32 years - without government financing or grants.

Stores like his can't undersell major retailers like Walmart and Dillons, Chansler says, but he aims to outdo them when it comes to customer service.

"People will bring a ham in, knowing they didn't get it here 'cause it's not our brand that we sell, to ask if we'll slice it for them," he said. "Well, sure, you know, and we don't charge 'em for it."

Chansler put in a new sidewalk and parking in front of his store two years ago. Last year, he replaced his upright freezers and meat cooler with energy-efficient models.

Moran's legislation would provide tax credits for upgrades like that. Chansler said that would be nice, but not game-changing.

But he's really not thrilled that St. John is subsidizing a new store - competition - with tax money.

"If you want to open up a business, bite the bullet and do it," Chansler says.

In deciding where to put a store, he is more concerned with finding a town that has at least 2,000 people and is 30 miles or more from the nearest big-box supermarket.

"If you're 15 miles away, it just becomes too easy for your customers to make numerous trips," White says. "If you're 30 to 60 miles away, you've got a chance of keeping them home."

If local and federal public financing is ultimately granted, White will not have to cover the cost of the building. That makes operating a store in St. John - which in his eyes is a little too small, and a little too close to Walmart and Dillons - less of a gamble.