Relationships, Rituals, And An Eye On The Inbox Fuel Family Fishing Operation

By Josephine McRobbie and Joe O’Connell 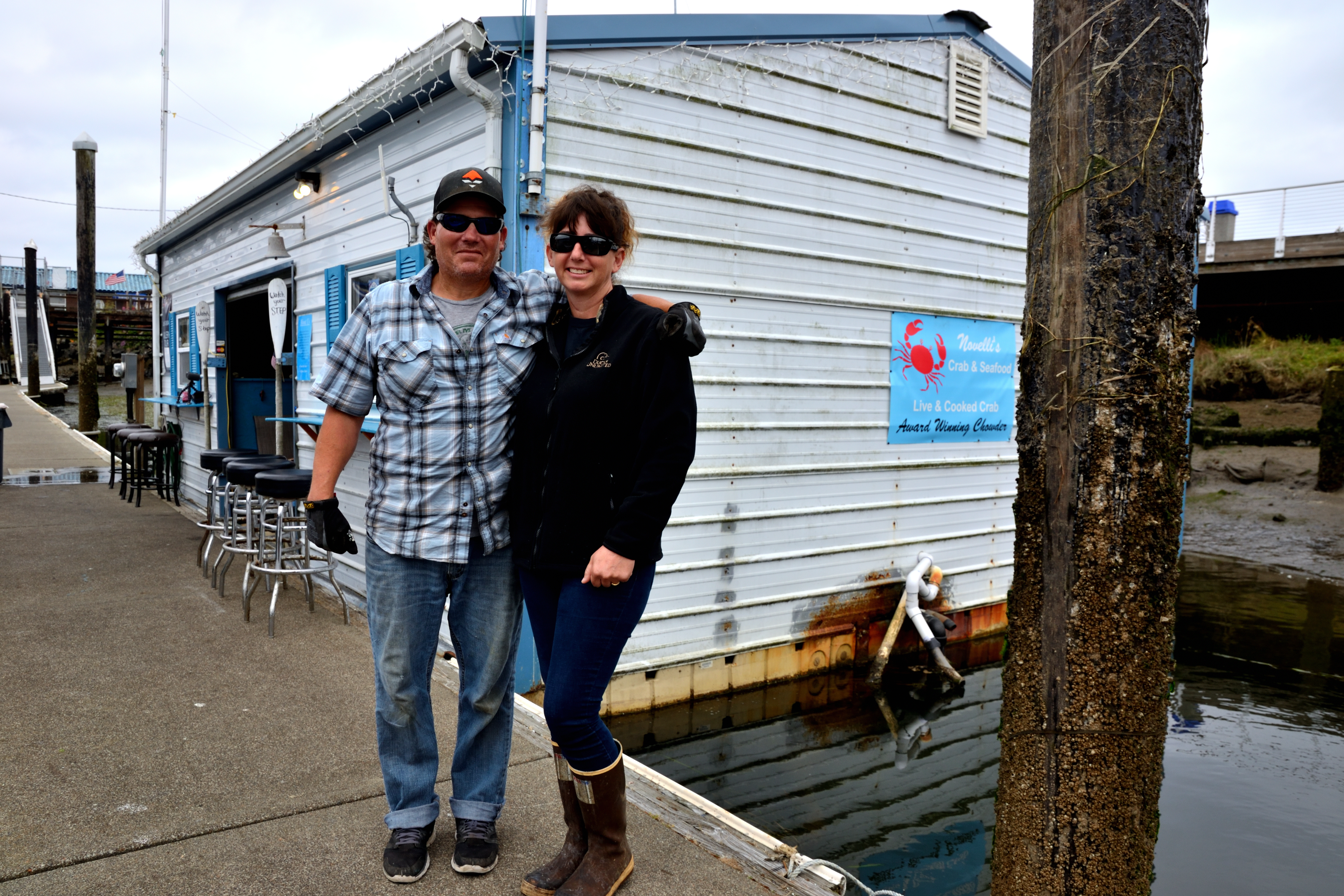 Running a seafood business on the Oregon coast is hard work, even during the best of times. Amber Novelli and her husband Kyle run Novelli’s Crab and Seafood in Florence. Some days, they’re fishing for salmon from their boat The Midnight. With 24 hooks in the water, they keep an eye on the “tattle tales”--flags that signal a fish on the line. Other days, they might be catching Dungeness crab on their bigger boat, The Aquarius. That process starts when they drop 200 baited crab pots in the ocean in December. In the weeks that follow, they pay constant visits to check for mature crabs. In between these trips on the water, they’re checking their inbox for the latest updates from the Department of Fish and Wildlife outlining allowable catch maximums. And finally, on top of all this, Amber and Kyle run a dockside seafood market, where walk-up customers can buy fresh fish and crab, most of it from the Novellis’ own boats.

At little markets like this, seafood chowder is a staple. It took Amber two years to develop the Novellis’ recipe, and the business still makes each pot from scratch every day. “I’m [up to] eight to 10 pots a day,” she says. To keep their fish and crab supply going at the market, Amber has cultivated relationships with a few other trusted fishers. “I'm very picky about who you buy from,” she says. “There's a definite way to take care of fish. If they don’t get enough ice, they're too soft, and then they're horrible to clean, they're horrible to sell, they turn into mush and they’re a mess.”

This business comes with serious economic risks, but also safety hazards. When Amber was young, her best friend lost two family members in a fishing tragedy. That experience stays with her, especially during a rough day at sea. “We’ve been out there sometimes and I did not think we were making it back in,” she says. “The first trip that was like that… I went and bought life insurance. I said, ‘Okay, if I'm going down, and I could leave each one of my kids $100,000, I'll be fine as I'm going down’.”

She and Kyle have had a few mishaps on their own boats. “Kyle went out this last time, heading out to the tuna grounds,” she says. “And on his way out there, as soon as the tuna started biting, the exhaust started on fire! The boat smells like a barbecue right now.” Amber says whenever she ignores fishers’ lore, bad luck is destined to follow. “It’s because I did a Facebook post that he was heading out,” she says. “I'm not allowed to do that, I only post if he is on his way in and he calls me and says ‘I have fish’. Because whenever I do a post saying he's on his way out, something goes wrong. That's just how it works.”

When Amber and Kyle started out, they still lived several hours from the coast. “We were hawking my jewelry to go out fishing on the weekends,” says Amber. They would fish for two days, drive the weekend’s catch home overnight, and sell out of their driveway the whole next morning. They were exhausted, but they were holding their own on the water, even in their “starter boat.” Amber saw potential in her and her husband’s weekend gig. “I looked at him and I said, ‘Babe, if you could make money doing this, let's do it. You know?’”

Now they rely on family to help keep things going on the boats and at the market. “We keep a house full of deck hands,” says Amber. “When my family comes to visit us, it's funny, I'll have four of them in there and they're all busy helping customers, bussing tables, selling stuff, cleaning crabs.”

It’s never easy. There are no guarantees of success, and there are more unknowns than ever. But as of last August, when things were busy at the market, Amber was buoyed by the support of her customers in Florence. “They really, really help me mentally get through all this, on the busy days especially,” she says. “I feel like an Italian mama sitting in a house with all these people just coming into the house. They all love my food and they all leave happy.” *

Hear the story on this episode of Earth Eats.

*We were deeply saddened to learn that Amber and Kyle Novelli lost their lives in a fishing accident on June 29, 2020. Since this loss, Amber and Kyle's family have worked to keep operating Novelli's Crab and Seafood. Those wishing to support the family during this difficult time can do so through this GoFundMe fundraiser. --updated July 20, 2020.