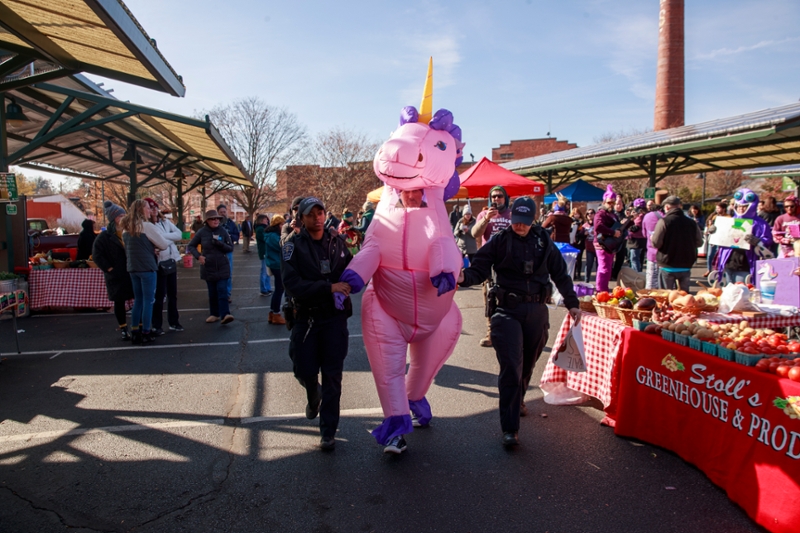 A Purple Shirt Brigade member is escorted from the Bloomington Farmers Market by police after refusing to put away signs boycotting Schooner Creek Farm, whose owners have ties to far-right organizations. (Jeremy Hogan/The Bloomingtonian)

A purple unicorn was escorted out of a Bloomington, Ind. farmer's market this weekend, after protesting a vendor with ties to white supremacist groups.

Schooner Creek Farm owner Sarah Dye is a self-professed identitarian with ties to Identity Europa - now rebranded as the American Identity Movement - considered a white supremacist group by the Anti-Defamation League and as a hate group by the Southern Poverty Law Center.

Dye was identified as "Volkmom" in transcriptions from chat servers on the messaging app Discord, a platform used to organize the deadly 2017 Unite the Right rally in Charlottesville, Va.

In 2017, Identity Europa posted fliers on the office doors of Indiana University professors of color. The Indiana man behind the Nazi graffiti at a Carmel synagouge was also a member of Identity Europa, and named Volkmom as an Identity Europa member during a subsequent FBI investigation.

Citing the First Amendment, the Bloomington Farmer's Market decided to keep Schooner Creek Farm as a vendor in the public market--spurring the organization of an alternate, private Saturday market at Bloomingfoods, a local grocery co-op on the east side of town.

Last weekend wasn't the first time the owners of Schooner Creek Farm were confronted by protestors. A group called No Space For Hate has kept an on-going presence at the Market, tabling in the designated areas of the market, encouraging customers to boycott Schooner Creek Farm.

The protests led to new rules implemented by the city's Parks and Recreation Department about where and how people can demonstrate in the market.

In July, a lone protester was arrested for holding a sign next to the Schooner Creek booth, and refusing to leave when asked by authorities. Market rules prohibit blocking vendors, holding signs in the main market area, and general disruption of market commerce.

These rules were the basis for the police action against the Purple Shirt Brigade this weekend.