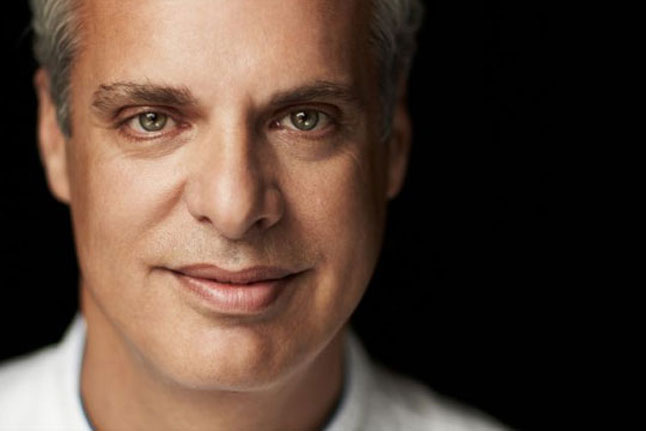 He achieved all of this before he turned 30 years old.

These days, he is perhaps best known as a guest judge on the reality show Top Chef.

Ripert will be appearing with Anthony Bourdain in Good Vs. Evil at the IU Auditorium (Bloomington, Indiana) on Thursday, February 16. He says the evening always starts off with the two friends roasting one another before the conversation turns to sustainability, new food trends and keys to running a successful restaurant.

"It's actually a lot of fun, and I think the public suddenly feels part of the game."

If It Tastes Good, It Is Good

Annie Corrigan: Is there something about eating or food in general that you Anthony Bourdain really disagree on?

Eric Ripert: We agree on what is good food and what is bad food. Anthony has trained his pallet for a long long time. First of all, he was a chef and, as you know, he has a show and travels a lot, eats a lot and tests a lot of food from different cultures. I think we have the same understanding that good food is a universal thing. It's not attached to one culture or another -- when it's good, it's good, and when it's bad, it's bad. However, Anthony can eat an enormous amount of sandwiches and hot dogs that I cannot.

AC: So maybe not six or seven hotdogs in one sitting?

ER: He doesn't do that normally, but on the show I've seen him eating hotdog after hotdog, and it's something that I definitely don't do.

Who Should Care About Health?

AC: Recently, we've heard a lot of news about Paula Deen revealing she has type-2 Diabetes. As a chef, do you think you have a responsibility to serve or promote healthy food, or at least to have your customers' long-term health in mind?

ER: Well, it's two things: when you are on TV or with a journalist and talking about nutrition and healthy food, and what you can serve in your restaurant.

When someone comes to the restaurant, very often the person is seeking an experience, is looking for something special, and therefore, you're not necessarily caring if it's the right amount of starch, fiber, the exact amount of calories the person should have, if it's not too sweet. When you compose a dish, you don't think like that.

Now, when you talk about it, you should definitely be concerned by your own health and the health of the people you are feeding. The way we cook here (at Le Bernardin) is fairly healthy, but again, my priority is to create a very harmonious dish, a delicious dish. But I will certainly not go on television and encourage people to eat a cheeseburger in between two doughnuts, that's for sure.

AC: We'll go to a question that a listener wanted me to ask you. She was curious how you go about creating new dishes.

ER: I work in collaboration with my sous chefs -- I have seven sous chefs -- and we all are passionate about food. We all go to different restaurants, visit different markets, and are approached by farmers who bring new products. We explore new techniques and very often I say I would like to see what we can do with that technique and this ingredient, for instance, and let's see what comes out of it. Then, in collaboration we go to the next level where we are like, can we do a dish with that?

When we agree, we meet again and we try to cook the raw material in different ways. We try to add some different elements with it, like acidity, sometimes we try to add some saltiness, some spiciness, to see if it works with that ingredient. Ultimately we come up with a result and then depending on how good we have been in terms of creativity, it goes to the menu or not.

But, it's all dictated by one mantra. The mantra of Le Bernardin being a seafood restaurant is "The fish is the star of the plate." So therefore, whatever we do, whatever we put in the plate is to elevate the quality of the fish.

AC: Let's talk about your study of Buddhism. How do you reconcile killing animals for food with your beliefs?

ER: It's definitely something I'm thinking about very often. Buddhism doesn't necessarily ask you to be vegetarian. So by nature, we are omnivores.

But, what I think is important in killing animals and eating animals is to have the respect for the soul of the animals; it's to try to kill the animal in the most efficient way without creating suffering. I would add another element, that we have to think also of sustainability. So, all those things are in my mind.

Now, when you catch fish, especially from big boats, the fish suffers definitely because it's out of the water and it's a long process. Hopefully in the future we will find some techniques to make sure that the fish is killed immediately.

Once a year I ask some lamas, which are Tibetan monks in Nepal and in India, to do a ceremony, which is lighting a thousand lamps. It's an offering to the soul of the animals that we have killed and served at the restaurant.

AC: Factory farms don't exactly have a stellar track record when it comes to treating animals with respect, either in life or in death. As a restaurateur, how do you fight that, and as someone who cooks in my kitchen, what can I do to change the culture?

ER: At the restaurant here, it's an expensive, luxurious restaurant. I can buy from small farmers. It's an extra cost.

A lot of people cannot necessarily pay for an animal that is humanely raised, which means your lamb, beef or chicken was running in a field, happy, enjoying life until you slaughter him. The majority of the food that we see in markets, especially when it's affordable, it is true that they are raised in factory farms and, therefore, have a miserable life and suffer a lot.

What we can do? Maybe allocate more money to the budget of eating. Also, changing some of the habits of eating and eating less meat protein during the week. That will encourage small farmers to create some businesses that are sustainable and also create a better environment for the animals.

AC: You have a similar problem in New York that we have in Indiana: the growing season stops once we get the frosts and the snow comes. For people who want to eat locally and sustainably year-round who live in climates like ours, what sort of advice would you give them?

ER: You can always eat a lot of grain and root vegetables, however you're going to go nuts (I mean in the sense that you're going to be bored, not that it's dangerous for you). You can try to avoid eating tomatoes, strawberries, raspberries, cherries and apricots and things like that in the middle of January because it's not in season, it's not available from where you live. You can have many other options.

In terms of vegetables, you have carrots, turnips, parsnips, root vegetables, celery, etc. In fruits, you have pears, apples and citruses in the winter.

But, I think you have to find a middle way in between what is available in your region and what you really want. Try to not be obsessive neither on eating only what you have in your region -- being a locavore -- because it doesn't make any sense, nor bringing everything from 5,000 miles away.

Tips And Tricks From The Kitchen

AC: You mentioned parsnips as a vegetable you can eat in the wintertime. Give me some advice for cooking parsnips in an interesting way.

ER: Parsnips are a great vegetable. It has a lot of flavor. I like it very much in puree, but I also like it cut in pieces and cooked in water with a bit of butter and salt. It's a very flavorful, very delicate vegetable.

AC: Another vegetables that everybody, across the board, seems to have problems with and wanted your advice on: eggplant.

ER: Eggplant is not a difficult vegetable to cook. What you need to do is peel the vegetable, because the skin is really often very thick and doesn't bring much.

Then slice the vegetable lengthwise. You put a little bit of salt on top of it and you let it like that for half-hour to an hour, and you will see some water come up on top. The salt will take most of the bitterness that the eggplant can have.

Then you can sauté your eggplants with some oil, garlic and onions in cubes or in slices and eat it almost like a steak. Eggplant is delicious.

AC: Do you have any recipes on your menu that include eggplant?

ER: I think the dish that eggplants are delicious with and mix well in the summer or the spring is ratatouille. It is sautéed zucchini, onions, eggplant, garlic, herbs like oregano or thyme and sometimes you add some chopped tomatoes to it. It's a delicious dish and the eggplants can shine really.

Success In The Restaurant Business

ER: If I was running a restaurant there, what I will do is I will try to avoid adding a large menu with too many items. I will try to have a menu that is the ‘menu of the day' or potentially the ‘menu of the week,' have not too many choices and cook fresh food on a daily basis in small amounts, knowing that obviously this is a slow season.

I wouldn't do that at Le Bernardin because it's a luxurious restaurant and we cannot say, "Hey, sorry. Too late." We work only on reservations. But, if you have a small restaurant, you're a small operator, I think people will appreciate the fact that they know that your food is very fresh and is cooked for the day, and instead of serving something mediocre, you'd rather close.