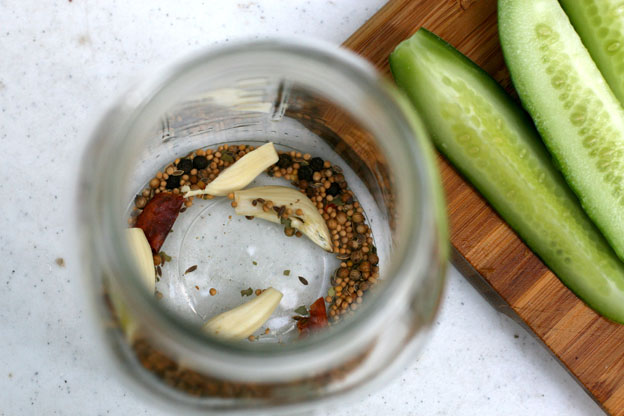 When you're enjoying the bounty of the growing season, it's not too early to look ahead to the cold months, when your garden goes barren and the farmers markets close up shop. One way to ensure you'll have tasty vegetables all through the year is by pickling them.

Amy Jeanroy is a freelance writer, co-author of Canning and Preserving for Dummies, regular Earth Eats contributor and farmer living in Nebraska.

I spoke with her about all things canning and pickling.

She says that pickling is a type of canning where a salty, highly-acidic brine is added to the food, andÂ the process is simple!

Give It A Try!

"So," she says, "everybody should give it a try if they have any idea that they might want to do it because it's pretty easy."

Many prospective canners start with pickling, because it's one of the easiest forms of canning to get into, here's how it works:

Sterilizing Your Jars Before Canning

"It's really important to make sure there's no residual food left over if you're reusing your canning jars, which most of us do," Jeanroy says. "The lids are never reused but the bans are. So, you have to buy new lids every year, but they are brand new, and they only take heating up in some simmering water to sterilize them."

What you're doing it trying to cut down on the bad bacteria that might be in the jar before you start your process. And you can do that with hot, soapy water in your sink â€“ really hot. Then, when you rinse them in hot water, leave them upside down to wait and be ready for you to fill with products.

Deciding What To Pickle

The brine is where you can get really creative with flavor. I asked Amy what foods she likes to pickle in sweet, dilly, and salty solutions.

"My favorite thing to pickle is zucchini, and the reason that I like it the best is because you always have tons of zucchini and you never have enough cucumbers.

So, I end up making pickles out of my zucchini, and once it's sliced and pickled in the jar, it looks just the same and it tastes really, really delicious.

I also like delicate things like asparagus and green beans. It just breaks up the monotony of always having them served the same way."

Jeanroy pickles vegetables from her garden throughout the season, as they become ready.

"My first thing is generally asparagus in the early, early spring, right now, Egyptian walking onion," she explains. "You've had the little cocktail onions. It's pretty much the same idea. I use my favorite pickling brines and they work beautifully."

"In the dead of winter when you're eating just from the pantry, it gets a little bit boring," Jeanroy says. "So I like to include pickled things just because it brings kind of a nice, crisp flavor to the same thing you're eating over and over again."

On Earth Eats, we've pickled green beans and peppers. Jeanroy says we can use our picklesÂ as a condiment, "especially the dilly beans â€“ I really enjoy those a lot, my family loves to eat those."

"Using the peppers, I would probably put them in a cold pasta salad more so than having them on the side of the plate," she says. "They're kind of intense to eat, you know, an entire slice of a pickled pepper. But, they're delicious in any kind of sandwich spread that you need to wake up. A cold saladâ€¦ potato-based, egg-based, macaroni-based, all of those. It really adds a great flavor."

Pickled garlic is the same. You just use a little bit and it really wakes up a dish.

Something unusual when you pickle garlic is that it tends to turn bright, bright blue. You're pickling a raw piece of garlic, you're not cooking it, so the sulfur compounds in the garlic react to the copper that's in the vinegar or, for some people, it's in their water, and it turns it blue, which is kind of fun and shocking. It fades eventually, but it's kind of a fun conversational thing to whip out a jar of pickled garlic that's all blue.

For folks out there who are interested in getting into pickling, Jeanroy says they should give it a trial run!

"I would love to see more people get out there and try canning and pickling because it's really not difficult," Jeanroy says. "It really expands your food pantry and cuts down on your grocery costs, especially in the time of year when you don't have all that fresh stuff."