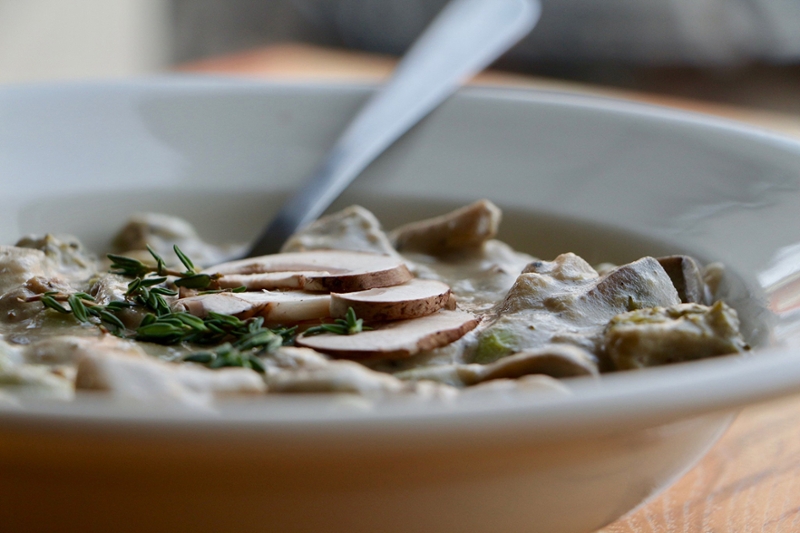 When Chef Arlyn Llewellyn makes a recipe vegan, she doesn't just do straight subsitutions to remove the animal products. She considers flavors, richness and mouthfeel as she builds the vegan version. In this variation on her garlic chicken soup, she uses a savory porcini mushroom stock and adds edamame for extra snap and protein.

Hear Arlyn walking through all of the steps  on this episode of Earth Eats. ​

Preheat oven to 400 degrees. Wrap whole head of garlic in aluminum foil. Bake until garlic is tender when pinched with tongs, approx 40-50 minutes. Remove from oven, open up aluminum foil wrapping and allow to cool.

In the meantime, bring 3 cups of water to a boil. Place dried mushrooms in a large heat proof bowl and pour the boiling water over them. Stir and then allow to sit until water and mushrooms are cooled to room temperature. Once cooled, carefully remove mushroom pieces (being careful not to disturb the solids which have sunk to the bottom of the bowl), and roughly chop. Transfer mushroom broth to a large stock pot being careful not to pour the last few tablespoons out as doing so would transfer the fine mushroom grit that was settled to the bottom of the bowl. Discard remaining broth (and grit).

In the large stock pot with the mushroom broth, place the potatoes. Bring to a boil, cover, reduce to heat to medium low, and allow to simmer until potatoes are just starting to become fork tender. Remove from heat.

Ladle out 1 cup of stock and potato mixture and place in a large head proof bowl. To the bowl, add the cream cheese and the roasted garlic cloves (squeezed out of garlic skin). Using an immersion blender, blend until creamy (or do so in a traditional blender).

Transfer pureed mixture back to soup pot and stir. To the soup pot, add the broccoli florets, sliced mushrooms, edamame, and minced garlic. Place lid back on soup pot and bring the soup back to a boil and then lower heat to maintain a simmer. Cook just long enough for broccoli to soften to desired texture then remove from heat. Season with salt and pepper to taste.