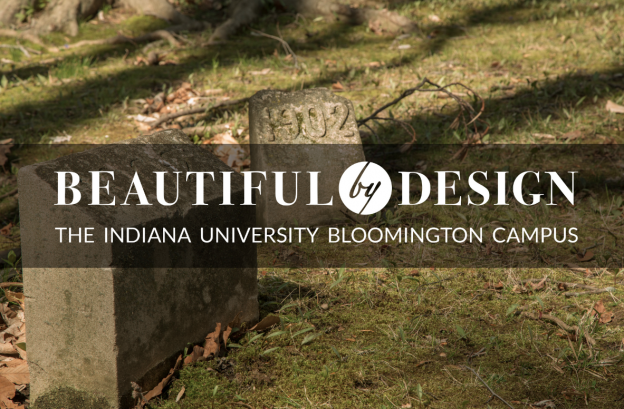 Beautiful by Design: The Indiana University Bloomington Campus premieres on WTIU and Facebook Live June 2 at 7pm. We talked with producers Susanne Schwibs and Justin Crossley about their experiences filming the documentary, the locations they love on the IU Bloomington campus, and more.

1. What’s your favorite spot on the Indiana University campus and why?

SS: Actually, there are several corners on the Bloomington campus that I really like. That is one of its special qualities: there isn’t just one central spot, but smaller areas that have their own distinct character.

One of the places I love is the Memorial Quad, it’s a beautiful quiet area that’s especially pretty in the spring. Few people like Ballantine Hall, but the square courtyard with the big beech tree and the sculpture by Robert Laurent “Veritas Filia Temporis” have a lovely ambience. In the summer the big green beech cools you down just looking at it. I couldn’t possibly omit the view down “college row” along Wylie, Kirkwood, and Lindley Hall, its classic architecture speaks “college” and it is particularly vibrant during fall when the trees are in full color and busy with students walking to class. Finally, nothing beats looking out the windows of Maxwell Hall during a snowfall.

JC: I’ve come to really to appreciate the courtyards that have been created on this landscape of the campus. The open area nestled between Myers Hall and Simon Hall is so beautiful. The contrast of the green grass and trees against the backdrop of the almost luminous limestone is a sight to see. My favorite space just might be the old quad courtyard, located just behind the newly renovated Memorial Hall and Goodbody Hall—it has captured my heart. The majestic limestone buildings that surround this quiet area make it a perfect place relax and gain perspective about your day.

2. What new or surprising information did you learn about the IU campus while working on this project?

SS: We discovered quite a bit of information I had never heard before. Some were about locations that no longer exists. Where Jordan Hall sits now there was a small lake that was fed by a spring and surrounded by limestone boulders. It was a beautiful natural area called the Sunken Gardens, but students called it the passion pit—you can imagine the rest. There also used to be a street with residential houses called Forest Place, which was removed in order to build Ballantine Hall. Several other things I learned while making the film are that Dunn Meadow used to be bigger and had a golf course, that Theodore Roosevelt gave one of his last speeches on campus during commencement in 1916, and that the landscapers leave deliberately wild spaces, including a prairie landscape near the School of Education. They even do a controlled burns occasionally.

JC: Some of the most surprising info to me was the little known IU “facts” or lore that I didn’t know even after being on this campus for 17 years. Fact: there is a couple that chose to dedicate the sundial located just next to the student building. This couple also chose to bury the remains of their ashes at the base of the sundial. If you look closely you will see a marker. Another interesting bit of lore or fact I found when speaking to our historian was that there is a crypt located in the Lilly Library that I believe is dedicated to a donor family’s daughter that died tragically.

3. What was the most memorable encounter you had while filming the documentary?

SS: Hands down the most memorable encounter was our interview with Betty Empson, who attended IU between 1943-1945. At 93 she hasn’t slowed down much. When I asked her what her secret was, she said to listen to your body: “if you’re tired, sit down and rest. If you need to eat, eat.” Betty worked her way through school—actually, her father paid the tuition, and she worked in the IMU and took care of all the other expenses.

JC: My most memorable encounters were with those individuals that help to keep up the beauty on campus. Whether it be a landscape job or even a maintenance position, they sustain all that we come to appreciate about this space and place. They had many funny and even sometimes tragic stories share. We were able to capture some great stories on camera; however, some are meant to just be shared among colleagues and friends. It was a great experience meeting these individuals!

4. What is the biggest way in which the IU campus changed since you first came here?

SS: I’ve had the pleasure to live and work here for over 35 years and experience the campus at busy and quiet times. I’d say the biggest change overall is that it looks more “groomed” with the many flower beds, the gates, etc. One thing I miss is the ivy that used to cover the buildings. I understand it was necessary to maintain the limestone, but the ivy imparted such a classic and warm look to everything. You can see what it looked like in one of the archival films we used in our program a 1950 IU Audio-Visual Center production called Indiana, Our Indiana.

JC: The years that I’ve spent on this campus have brought many changes, many renovations and newer builds that I have come to appreciate. The city of Bloomington has changed dramatically. However, the campus with its many new features has kept a continuity that I find comforting. As I have been encountering many alumni, they also share the sentiment that they adore that many places are as they remember them.

5. What should someone who’s never visited IU know about the campus?

SS: Must see things are the Sample Gates, the clocktower, the IMU, the Fine Arts Plaza, and the arboretum. But there is so much more; it simply takes time to discover it. The first impression of campus is that it is pretty and inviting, but it has many layers of beauty that have to do with its history, its overall layout, and little touches left by people through the years. One is never bored walking through campus and often I find things I hadn’t noticed before. It really invites you to look and listen. This combination of the familiar and surprising give campus a special magic, I think.

JC: You should know that upon entering this campus you will appreciate the the landscape maybe even the buildings and that alone is inspiring. When you take a closer look you will always see something new! As seasons change something old that has been there for many years can capture attention in the new way. Perhaps the path to class or work along the same corridor suddenly opens up a new vista for you because the spring flowers begun to bloom. After I left this campus many years ago, upon my return I pay more attention and appreciate subtle things around this space.