Lotus At 20: World Party In The Back Yard 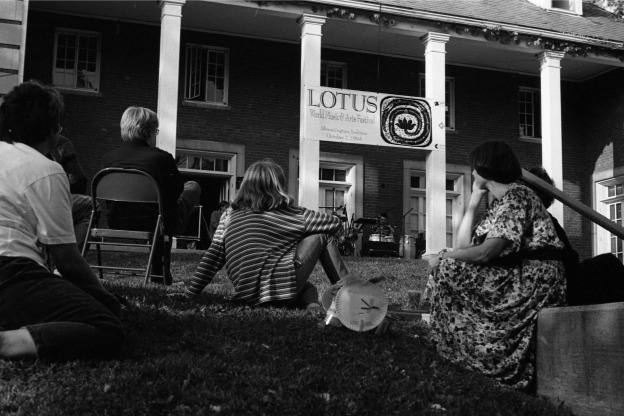 A concert by Andrew Lazaro took place on the front porch of the Mathers Museum in 1994 as part of the first Lotus Festival.

It’s that time of year when downtown Bloomington becomes a glittering carnival of sights and sounds from around the world. But the 20th annual Lotus World Music and Arts Festival bears little resemblance to its humble beginnings.

The first Lotus festival was a relatively modest affair—one night, four venues, and fourteen musicians, many of whom were IU students. Lotus directors Lee Williams and LuAnne Holladay share memories of the inaugural event, which has since grown to a five-day, eight venue extravaganza attended by around 12 thousand people.

The Mathers Museum of World Cultures was an obvious choice when it came to selecting the original venues for the festival. The museum has a collection of rare musical instruments–not to mention countless other artifacts of material culture–from around the world. The musicians performed on the front porch, and the audience gathered on the lawn. It was a literally earth-shaking experience, according to longtime Mathers staffers Judy Kirk, Elaine Gaul, and Matt Sieber.

Although it’s no longer a museum piece, Lotus at 20 is still bringing performers from around the world to our own back yard. And this year, as a tribute to Lotus’ longtime home base, a generous number of performers do in fact come from our own back yard. We’ll share conversations with Bloomington based acts  Mr. Taylor and his Dirty Dixie Band and Lily and Madeleine, listen to the Haitian-infused melodies of singer-songwriter Leyla McCalla,  and visit with the veteran Lotus act, Swedish string trio Väsen.

Along the way, we share memories of Lotus past with Gergana May, Bill Holladay, and Mark Feddersen.

Leyla McCalla of the Carolina Chocolate Drops discusses her debut solo album that features songs she wrote to poems by Langston Hughes.

Olov Johansson of the Swedish band "Väsen" speaks about the trio's special connection to Bloomington, where they'll be performing this weekend at Lotus.