The Wunderkammer: All The World In A Room 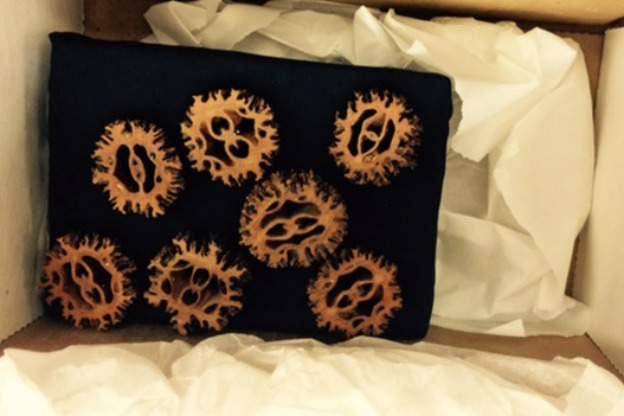 The Wunderkammer was Grunwald Gallery Director Betsy Stirratt's pet project. She brought the idea to fellow curators and collection managers at Indiana University.

"They liked the idea of not only identifying the best items in their collections, but coming up with the most unusual items," Stirratt explains, "and that's really what important about this show. For the most part, these institutions might have their best things on display, but these are items that you don't see."

Except here at the Wunderkammer.

"Over here I think is our most fun piece," notes Kelly Richardson, curator of the Elizabeth Sage Historic Costume Collection, which contributed a particularly personal effect to the show. The item on display in one glass case happened to belong to Herman B Wells, the longtime chancellor of the university.

"We couldn't pass up the chance to get some of his underwear," she continues, "and these are not the underwear in the package by Hanes that you get at Target."

After Chancellor Wells' death, The Sage Collection was permitted to look through his closet.

"They're monogrammed," Richardson elaborates, "they've got drawstrings on the side to adjust fit and they're just really wonderful. You can see we love our underwear because what we wear on the inside really affects how things look on the outside."

"We have a red fox penis bone that's only about this long," she says, gesturing toward one of the specimens from the Kinsey on display.  "We have several raccoon penis bones. They have a nice curve to them. I could see them in a necklace."

"There's a lot to look at closely," marvels one retired IU professor, strolling through the exhibition with her friend. "I mean there's amazing little details in every case. I didn't think of IU as having this material that you could put together in such an exhibit."

"It began many centuries ago in Europe when people started to learn about the world, the natural world and the cultural world," explains Stirratt.  The exhibition at the Grunwald recreates the Wunderkammer, literally the chamber, or cabinet of curiosities.

"They would send explorers out to collect items from all over the world and it was the very first explorers that brought these items back and people started to collect them that became the basis for the museums that we have to today."

It costs a lot to preserve objects like this, Stirratt notes, and there is no umbrella of fundingeach institution has to manage its collections and support itself. So why not dig through the Internet for the strange and rare instead?

"Well I think it just becomes more real to you," explains one college student.

"You're actually seeing it," her companion suggests; "it's not just on a screen. You can spend more time looking at it instead of just scrolling to the next thing, one after another."

"With the Internet, the actual objects lose their relevance in a way," Stirratt notes. "I mean, at least people think that."

But with this exhibition, the Grunwald director hopes visitors will leave with the conviction that these collections are worth preserving. "I think the actual objects are very important to preserve and to maintain our connection with the natural world," Stirratt asserts, "with the idea of learning and with the idea of scientific study and cultural study."

That takeaway wasn't lost on at least one patron, fixated on a braid of hair from the Wylie House Museum.  "It's too interesting to give up," she avers.