Sasha Janes: My name is Sasha Janes. I'm a professor at the Jacobs School of Music Ballet Department. And that means I teach daily class and I help stage all the ballets that you will see on the MAC stage.

Aaron Cain: So tell me about this event that's coming up.

Sasha Janes: Well, the event we have coming up is pretty exciting. It's called Fall Ballet, obviously, because we're doing it in the Fall, and we give it that generic title on purpose because it's such an eclectic mix of different ballets. So, rather than going to see one half-hour, full length ballet, this is four different ballets, all very different from one another—different composers, different styles, different music—that you get to see in one evening. So it's a terrific evening of dance where there's always something for everyone.

Aaron Cain: And there are four main events, as you say.

Aaron Cain: The first seems to be what you'd maybe call a classic. It's the one choreographed by Balanchine, is that right?

Sasha Janes: Yeah. Of course. George Balanchine, the genius choreographer of the 20th century, created a piece called Valse Fantasie. He first created it on New York City Ballet in this iteration, the iteration that we're going to see, in 1967. And it was part of a larger ballet by the music of Mikhail Glinka. Glinkianna, I think it was called. And this is the second section of that ballet and it's sort of a nine-minute tour de force ballet typical of a lot of Balanchine ballet, that are highly energetic and have very virtuosic steps in them. So it's an exciting piece.

It's staged by Kyra Nichols, one of our professors in the department, and Christian Claessens, both wonderful dancers in their time. Kyra Nichols being one of the last generation to work directly with George Balanchine, so to have that input to our students straight from, essentially, the horse’s mouth is just amazing for our students.

Aaron Cain: Since you have two world premieres also on this program, I'm wondering if there's any difference in how you approach putting something on its feet, so to speak, that is brand new versus something that is coming down to you from a tradition of a previously choreographed work.

Sasha Janes: That's a great question because a world premiere, or piece that is being created on you, is certainly different than inheriting a piece that's been created on someone else.

When we’re taught a piece that already exists, we do the steps as they were conceived in maybe the first iteration of that ballet, or maybe the second iteration if the choreographer’s made changes. When you have a choreographer like Nicole Haskins, who came here and is creating a world premiere, she sees our dancers, she sees their strengths, and then she will choreograph something, hopefully, that plays to their strengths and give her a piece that she can really be proud of. I always call it the difference between buying a really beautiful suit off the rack and getting a tailormade suit, and that would be the analogy that I would use.

Aaron Cain: So let's talk a little bit more than about that other world premiere, the second one on the program, that's the one that was done by someone who came from Boston Ballet.

Sasha Janes: Okay. Yeah. This is really interesting. Because for the last 21 years, I've been spending my summers at the Chautauqua Institution, where I work. And I'm currently the interim director of the School of Dance up there and the Artistic Advisor. So I proposed this idea to our Chair, Sarah Wroth, that we do a collaboration where we get a choreographer that can come and work on the dancers in Chautauqua in the summer—where we’ll build the costumes, they can create a work, and then we'll give it a soft premiere in Chautauqua. Then I'll bring those costumes back and we'll redo it again on our dancers here. So there was a really nice synergistic approach to creating a work and having more than just our dancers at IU experience the work of My'Kal Stromile, who's a beautiful dancer but an up-and-coming choreographer with Boston Ballet. So it was this wonderful collaboration between two entities that came together to produce this new work. The work is very precise. He has a mentor, and his mentor is William Forsythe, one of the greatest choreographers of the last century. And he would take video and then send them to William Forsythe and say, “check this out, what do you think?” And he'd get feedback, which was amazing. It's very precise. It's very intricate. The music is Renaissance music. Antonio de Cabezon is one of the composers. There is also some other music; there's four different movements in this piece, and some of the music is just labeled as anonymous. So the interesting thing is we always do live music in Chautauqua. This piece here, when we do it, we are going to use the recording.

Aaron Cain: is there live music as well as recorded music in the evening as a whole?

Sasha Janes: There is, yeah. That's the only piece that we'll be using recorded music.

Sasha Janes: Nicole Haskins is an up-and-coming choreographer. She most recently was out at Oregon Ballet Theatre. She created a work for us in 2019, I believe. Sarah [Wroth] wanted to create a piece that was just for the female-identifying dancers. What she managed to do was create this beautiful piece to Beethoven's String Quartet Number 15, third movement, for 16 female-identifying dancers. We have two casts. So if you're going to come, you're going to have to come twice, because you've got to see all the dancers do this work. And that's going to be played live by the Kuttner Quartet, an IU student quartet here, so we're pretty excited about that, too. Hearing that music being played live as well should be a really wonderful experience.

Aaron Cain: And the final work on the program: Angels in the Architecture. That's choreographed by Mark Gordon.

Sasha Janes: Mark Gordon’s an American choreographer based in Montreal, he's done many works for different companies all over the world. This piece is actually having its 30th anniversary, so he created it in 1992. It's to the wonderful music of Aaron Copland’s Appalachian Spring. And when he conceived the piece, there was a hymn in it: “’Tis a Gift to be Simple,” which was a Shaker hymn. And it got him thinking about the whole Shaker ideology and shaker religion. And that was the jumping-off point for this ballet. It's really a fascinating ballet. It's incredibly beautiful. There are props in it. You will see brooms and chairs and a peg rail that encompasses the whole stage ,where the brooms and the chairs are hanging. He did a bit of a deep dive into the Shaker religion. One of the things he found really interesting was the way you could receive your God in the shaker religion. And that manifests itself in speaking in tongues or shaking, or however you wanted to receive God was okay within the community.

So you could be really individual, as opposed to ballet where it's very rigid and confined and there are so many rules in Ballet, but you're still striving to be an individual and find your own individual artistic opportunities and abilities and stuff. So he found that parallel really quite interesting. I think it's always interesting to see how the dancers take on the different styles.

All of these ballets are quite unique in their styles and what we're asking the dancers to do.

I think it's something that's happening to the younger generation, right, where they’re so great at multitasking and being able to do so many things at once. And that's what, if you join a ballet company in these days, that’s…you have to be able to do so many more different styles than what you may have had to do 30 years ago. You don't join a ballet company and just do ballet anymore. So we're asking these dancers, some of them that are in three ballets in the evening, to do multiple different styles in one evening. It's not always tutus. It's not always pointe shoes. There are many different facets of ballet. I think, as a community, art brings us together.  I think, sitting in a dark theater with people, listening to live music...I remember as a child going to a ballet performance and hearing the orchestra warm up and I would just get—I'm getting it now—I get goosebumps just hearing that. Just the warmup. Nothing had happened yet. But just hearing an orchestra warm up. I think humans need to be together. And I think sharing art together is one of the greatest things you can do.

Aaron Cain: Sasha James, thank you so much for speaking with me.

Sasha Janes: My pleasure. Thank you for having me.

Aaron Cain: The performances of Fall Ballet start Friday, September 30th at 7:30 PM at the Musical Arts Center, and there are two more performances on Saturday, October 1st at 2:00 PM and 7:30 PM. More information at operaballet.indiana.edu. For WFIU Arts, I'm Aaron Cain. 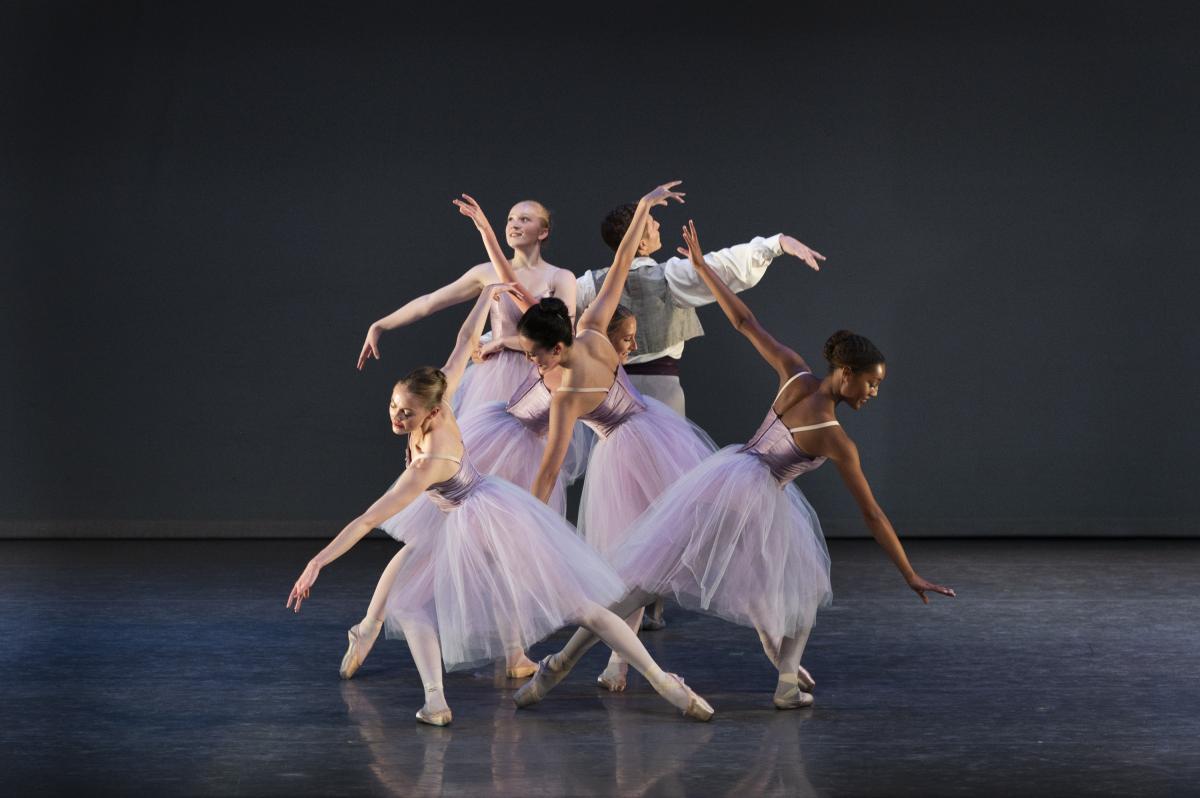 “I remember as a child going to a ballet performance and hearing the orchestra warm up,” says Janes. “And I would just get—I'm getting it now—I get goosebumps just hearing that. Just the warmup. Nothing had happened yet.”

As a professor at the Jacobs School of Music Ballet Department, Janes teaches daily classes and helps stage the ballets presented on the stage of the Musical Arts Center, including Fall Ballet, which will be performed at the MAC on Friday, September 30th at 7:30 PM, and Saturday, October 1st at 2:00 PM and 7:30 PM.

The performance features four different works, two of which are world premieres. Janes says that the diverse styles of dance and music are not only entertaining for an audience but also vital for building the careers of young dancers.

“All of these ballets are quite unique in their styles and what we're asking the dancers to do,” says Janes. “If you join a ballet company these days, you have to be able to do so many more different styles than what you may have had to do 30 years ago. You don't join a ballet company and just do ballet anymore. So we're asking these dancers, some of them that are in three ballets in the evening, to do multiple different styles in one evening. It's not always tutus. It's not always pointe shoes. There are many different facets of ballet.”

Recently, Sasha Janes spoke with WFIU’s Aaron Cain about the music, the choreographers, the dancers, and the experience of Fall Ballet.

Listen to the full interview above.

More information about the production can be found at operaballet.indiana.edu.