Water by the Spoonful...A Tragedy with a Happy Ending 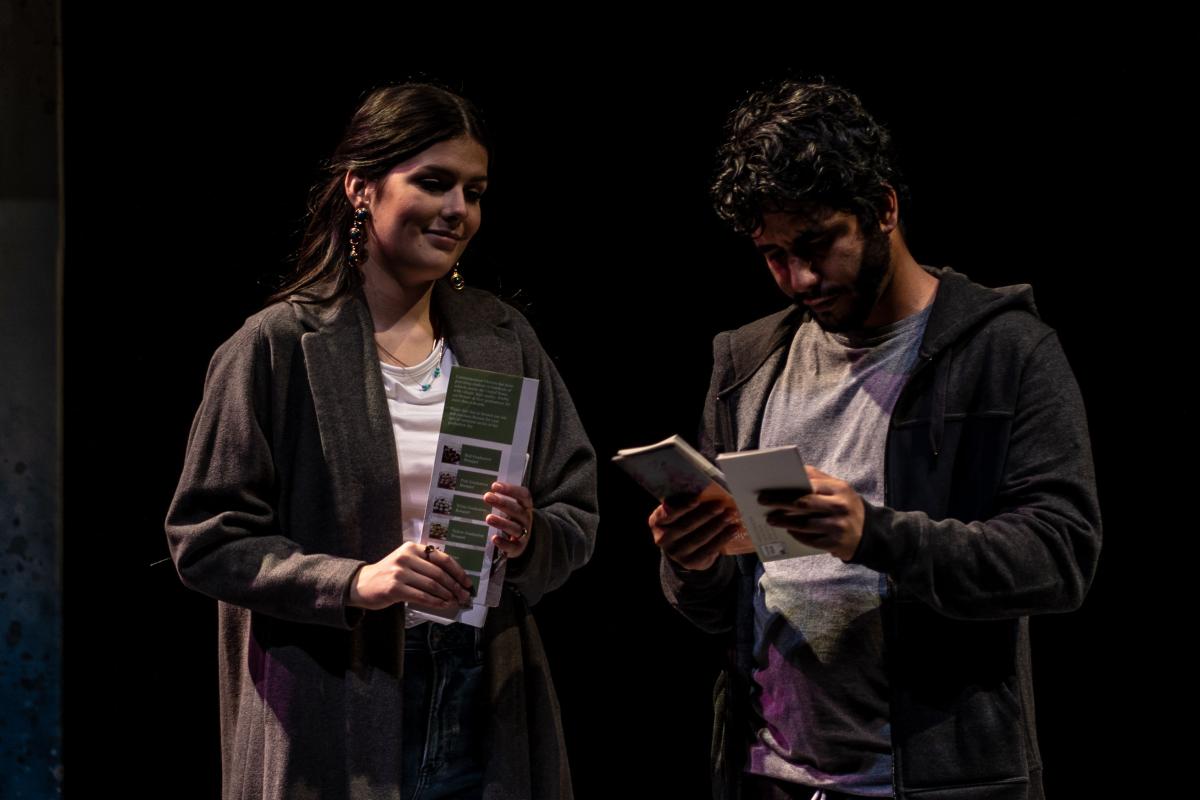 Water by the Spoonful at IU’s Well-Metz Theatre is Quiara Alegria Hudes’s Pulitzer Prize winning play. The play is a character rich evening with two stories they come together only in the second act.

Elliot Ortiz, an engaging Peter Ruiz, is a Puerto Rican Iraq War veteran who’s clean, but was addicted to pain killers during rehabilitation. He’s working in a sandwich shop and wants to be an actor. His cousin Yazmin, a resolute Taylor Harmon, is finding teaching rock and rollers to appreciate the free jazz of John Coltrane disappointing.

In the second story, Odessa Ortiz, Elliot’s mother runs a chat room for recovering addicts. The older, magnetic Chutes and Ladders, Dwuan Watson works for the IRS. Orangutan, a young three month success, an appealing Casey Jun Hyuan Kwon is a Japanese adoptee, raised in a small town in Maine. Fountainhead, an engagingly egotistical Jay Hemphill, upsets the balance and with his efforts helps us explore the day-to-day, hour-by-hour difficulties of staying clean.

The flexible Well-Metz Theatre is a challenge for directors and designers. For this show, it is set up in a horseshoe with the stage thrust into the audience. Scenic Designer Christopher Mueller has divided the floor with raised platforms for the chatters. The backdrop is large abstract paintings, which are moved around and occasionally help focus the action.

I was sitting in the center. This gave Chutes and Ladders and Orangutan an advantage in proximity. Odessa leading the chat was in the middle and Fountainhead, with good projection and diction, was all the way in the back. Elliot and Yazmin were mostly in the middle, but Yazmin’s class and their presentation at the funeral was way in the back. A microphone for the funeral might be in order.

Costume designer Rachael Saylor helped place the drama. Chutes and Ladders… was in a bathrobe at home, tie and jacket at the office. Orangutan had a nice skirt and top set, a flashy disco outfit and a more comfortable travel suit. Elliot did have a suit for the funeral and a more casual set. Yazmin moved from pants to a black dress for the funeral and then to shorts and a rustic top.

With the death of Mami Ginny who raised Elliot, the planning of the funeral brings old baggage up for their and our consideration. We learn what was only hinted at in the first act, that Mami Ginny was a force in the neighborhood both politically and in direct loving support of persons who were hungry and homeless. Despite Odessa’s good work as a moderator of a chat room for addicts, we learn that her addiction led to a tragedy that years later still festers with Elliot’s desire for revenge.

Is it fair to tell you that there is a happy ending to Water by the Spoonful? I think so, but is you don’t, stop listening. Odessa has a stroke and despite his desire for revenge Elliot feels for her and enlists Fountainhead to care for her. The ghost that pursues Elliot is exorcized. Both Elliot and Yazmin come to Puerto Rico. He decides to pursue acting in California. She has already sold her piano to buy the family house and continue Mami Ginny’s work in the community. They toss Mami Ginny’s ashes, and the house lights go out.

The production of Water by the Spoonful directed by Rachel Nicole Pierce plays November 8 through the 16th. Even though I’ve given you the reassuring outline, there’s lots of richly imagined and presented detail with interesting and multi-dimensional characters to enjoy in this involving production