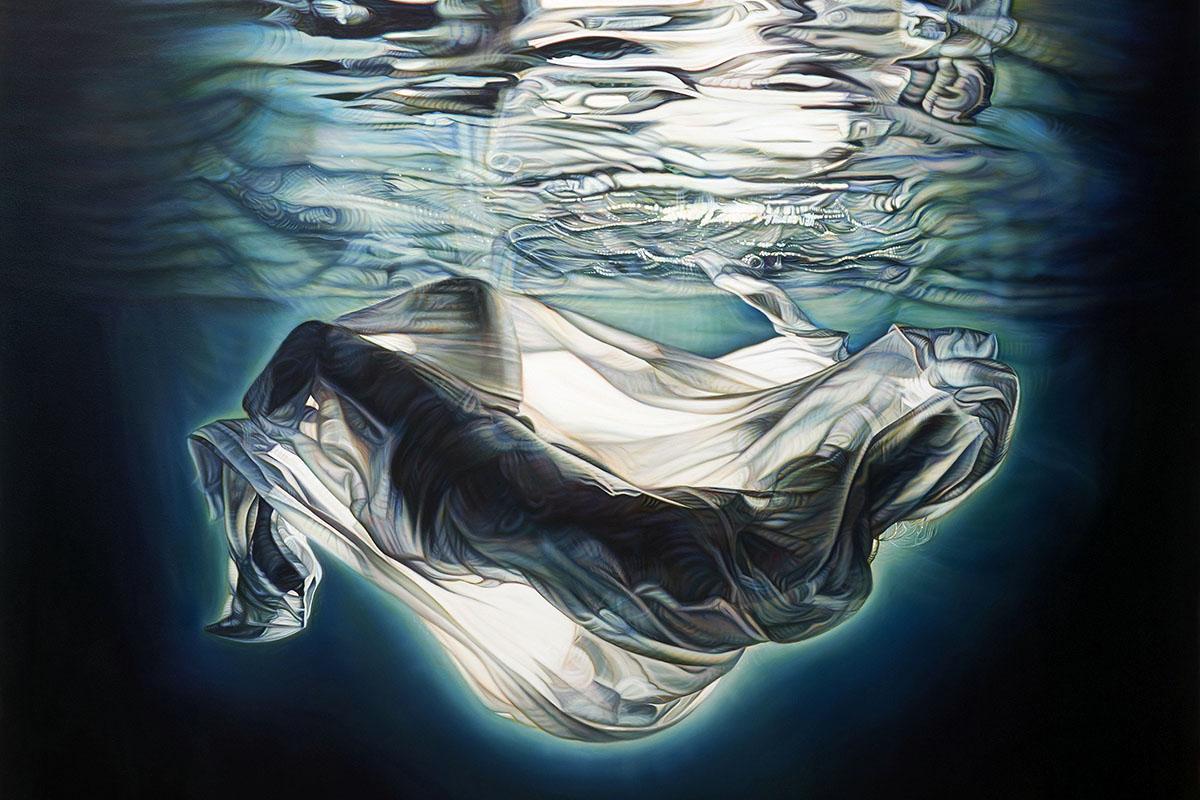 Ana Teresa Fernandez, Of Bodies and Borders 2, 2018, Oil on canvas. (Photo courtesy of the artist and Gallery Wendi Norris)

Performance Artist Ana Teresa Fernández remembers discovering that thousands of people drown every year while trying to cross the Mediterranean Sea from Africa or the Middle East to Europe. As she often does when she finds a news story difficult to fathom, Fernández turned to performance art to help her reach a deeper understanding.

“When we hear that 300 individuals sunk on a dinghy, it's hard to wrap your brain around what that means,” Fernández said. “When I make my work, I try and create something that evokes an experience that people can jump into and submerge themselves in and in a way that is not about statistics and numbers, but it’s about feelings and emotions.”

Fernández will give a talk at 5pm on Friday, January 11 in room FA015 of the Fine Arts Building, followed by an opening reception for her exhibition titled Of Bodies and Borders. The exhibit features videos, paintings and drawings based on Fernández’ performance in which she braved the Mediterranean Sea while wearing high heels, a weight belt and a white bed sheet.

“I plunged into the sea and began trying to dance or wrestle with the bedsheet and it was both terrifying and beautiful and freezing and incredibly difficult,” Fernandez said.

Lots of people ask her why she chose to include a bedsheet in this performance, Fernandez said. Her answer is that the bed sheet represents something that many of us were wrapped in as infants and also something that we might be wrapped in after we die as a shroud.

“It's this metaphor of the possibility of rebirth as someone embarks on this journey or the other outcome, which is really an awful, devastating one, which is the sea taking individuals’ lives and having them drown,” Fernández said.

Light is another important aspect of the pieces featured in the exhibit, Fernández said. Depending on the position of the lights, the videos of her body conjure images of both death and new life.

“Sometimes the body becomes completely obscured and blocked off and sometimes it gets shown from behind and so it looks almost like an x-ray,” Fernández said. “There's other moments where the body gets lit from the front and it’s almost like it's this glowing cocoon about to rupture from the chrysalis.”

In order to create the light-filled videos, drawings and paintings for this exhibition, Fernández traveled from her home in California to Greece with two underwater lights, both of which weighed more than 35 pounds, and two colleagues who had experience with underwater filming. She also cold-called the French underwater artist Hortense Le Calvez to ask for help with this project; Le Calvez agreed and the project began.

“There were 2 other men with me, Gerardo Rivero and Jonny Kloberdanz, who were both wearing scuba gear and wetsuits and holding underwater cameras; Hortense was holding the underwater flashlight,” Fernández said. “They were swirling around me while I was moving; there were moments where I knew where they were and we would engage more, and other moments where I didn't know where anyone was.”

Fernández said her parents were slightly terrified of her doing this performance piece in the ocean, but Fernández took comfort in her 12-year experience as a competitive swimmer.

“We definitely had a whole plan if I wasn't able to find the edge,” Fernández said. “There were a couple moments that were a little bit tense where I swallowed a little bit of water, but my intent was not to drown myself.”

This performance was not the first of its kind for Fernández. In her 2011 performance titled Borrando la Frontera, Fernández painted sections of the U.S.-Mexican border fence in San Diego sky blue in order to erase the border. In 2016 she created a video called Erasure in which she covered herself almost completely in black paint in response to the murder of 43 college students in Mexico.

“There was something so gut-wrenching about it that I just had this very visceral reaction of ‘I need to make my body disappear,’” Fernández said.

Betsy Stirratt, director of the Grunwald Gallery, joined the Arts and Humanities Council of IU to select an artist who would fit the theme of this year’s global festival, Mexico: Remixed.

“I worked with them to select Ana Teresa Fernández as our artist because she is Mexican-born and also deals with issues related to border crossings and immigration and I thought it was very timely,” Stirratt said.

Fernández said borders represent an impediment to freedom which is one of the most important currencies we have in this world.

“I think that borders come in so many shapes and sizes and sometimes it's not physical,” Fernández said. “A border is something that limits us from the completeness of what could be.”