Visions of Right: A Response to Hate 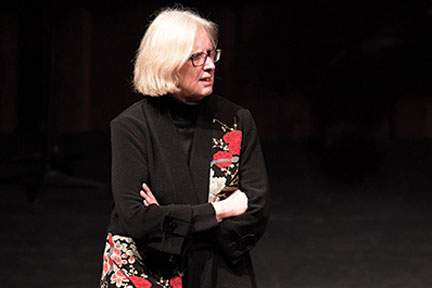 Can it be that the Jewish Theatre of Bloomington is actually celebrating its twelth year! With her opening remarks, Producing Artistic Director and founder Audrey Heller detailed the story of "the little theatre that can" as she introduced Marcia Cebulska's Visions of Right Thursday night in the Ivy Tech John Waldron Arts Center's intimate Rose Firebay. In 2005, the JTB began with a single staged reading, soon expanded to two readings annually, and then on to today's ambitious schedule of an annual reading of a set of scenes and two full productions.

Marcia Cebulska originally wrote the play Visions of Right in response to the hate ministry of the Westboro Primitive Baptist Church based in Topeka, Kansas where she lives. Central to the church's ministry are broad brush attacks on artists, Jews, scientists, homosexuals, prostitutes, supporters of reproductive choice, and more liberal Christians.

As the lights come up on Visions of Right, there is a bare stage with just five loosely arranged chairs and a well-stocked coat tree. Christina Romanek has the opening monologue. She's an articulate New York art photographer transplanted to Kansas. She speaks of photographs that capture souls though it later appears that her recent show was of still lifes of toys. In New York, she was hit in the chest by a couple of stray bullets from a Nazi sympathizer intent on killing a nearby black pedestrian. She hides the scars from all, but to combat her paralyzing trauma, her husband has moved them to Topeka, a place she calls "the center of nowhere."

Christina's adoring husband, "Oz" is an eye doctor who has given up a thriving practice to move Christina to Kansas where he's taken up a research position. Oz is a self-identified Jew whose Jewishness seems to center on the murder of nine family members in concentration camps during the Holocaust. He also shares with the audience a wry Yiddish-tinged sense of humor. And he, like his wife, is concealing a scar, the memory of a controversial medical decision and action.

Christina's best friend and champion is gay, gallery owner Larry Uffizi. Yes, it's a bit of a joke in the play that his and his gallery's name are the same as more famous one in Florence, Italy. Larry ‘s creed is to display meaningful  work sometimes judged more on the artist's passion and vision than on the results. He has notions of purity for his gallery in New York and there's guilt about some of his after hour sexual activities there.

At least in the early scenes, Christina, Dr. Oz and Larry are well-rounded, attractive characters fluently talking to one another and to the audience. Brief scenes with the hate mongering Reverend Noah Jones offer only a bluff cardboard figure of the Westboro Primitive Baptist Church's spiritual leader.

In trying to escape from the trauma of her shooting, Christina proposes a trip to Poland. She's heard that a grandmother was a blacksmith and thinks that connecting with this sturdy independent figure will help her heal. Dr. Oz is skeptical. He says that even years after World War II and the Holocaust, Poland is no place for Jews. But, he agrees and the two set off. Initially we hear of success. Christina connects with family and finds that the smithy where her grandmother worked is a little like her own safe haven, her photography dark room.

On a scenic drive in Poland, they accidentally take the road to the memorial site of Auschwitz, the site of the murder of Oz's grandparents, aunts and uncles.  Inside Auschwitz, the piles of abandoned labeled suitcases, the enormous stacks of shoes and rows of eyeglasses…are mute remains, but they speak powerfully to both Oz and Christina. Dr. Oz is overwhelmed and wanders off. Christina finds a photograph of a victim with her name and powerfully identifies the woman's fate with her own trauma.

Back in Kansas things are heating up. The Reverend Jones has made Dr. Oz's controversial decision to remove a young girl's eyes, a national flash point and he's publicly called Larry Uffizi's gallery a purple den of iniquity. Christina has previously    been the target of the Reverend and his congregants' criticism and demonstrations because they believe that artists keep company with Jews and sodomites. It's a dark time.

The effect of the Reverend's campaign hasn't been what he really envisioned. No mass of supporters have rallied to the side of his demonstrators and placard carriers. Media coverage has generally been critical both of his tactics and their execution. The same can't be said for the victims. At this juncture, Christina is still traumatized by the stray bullet that she has come to believe may have been caused by her own associations and choices. Dr. Oz, despite having made a considered judgement and followed with years of solid medical work, is devastated by the church's attack on him. Larry Uffizi thinks that his gallery, is forever tainted by his own hedonism. They all have their visions.

Christina, dresses as a potential congregant and sets off for the Reverend Jones' church with a camera and a gun in her hand bag. I'll leave the plot here.

Visions of Right boasts a strong cast with Abby Lee as a frequently compelling Christina. Chris Handley has charm with a nice innocence and a real skill with storytelling. Adam Decker does a very nice job with the character of Larry, Christina's truth -telling friend and later friend to Oz. Gerard Pauwels, especially in scenes that I haven't described, presents an attractive and sympathetic picture of the angry preacher. Direction is by Martha Jacobs throughout I felt a strong attention to the individual characters and their interaction in the drama's flow.

Vision is a central motif in this play – and in today's world, the potency of our visions of right and wrong, evil and good divides. There's a lot to process after the lights go down on Visions of Right and I'm happy to report that talk back sessions follow performances.

By the way, patrons at the opening's preshow reception received an extra treat as an octet from the Quarryland Men's Chorus with pianist Wendy Elliot offered a nicely put together suite of songs.

The Jewish Theatre of Bloomington's production of Visions of Right in the Rose Firebay of the Ivy Tech John Waldron Arts Center plays through May 27.

You can find reviews of area plays and operas and an interview with playwright Marcia Cebulska at WFIU.ORG/Arts