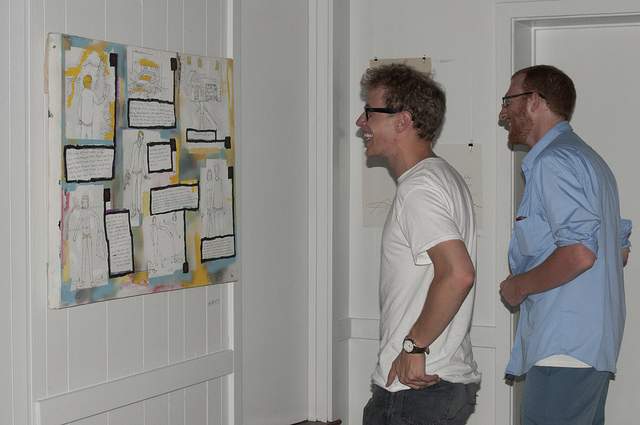 A new event space, called The Back Door, opened in downtown Bloomington this weekend. The inaugural event, a solo art show entitled, "How can you hear anything with all of those clothes on" featured the art of LA-based Jeremy Kennedy and local musicians.

Building owner Skip Van Cel is actually an artist who fell into the role of landlord when he discovered that being an installation artist wasn't entirely as financially viable as he thought. His hands off approach towards management has already fostered an art gallery known for experimentation in his hometown of Miami called White Vinyl. He hopes that The Back Door will provide a similar kind of venue for new art and offbeat events, but mostly he is excited to see what Bloomington will make of it.

"White Vinyl in Miami became notorious for being a place where you could experiment. And I told people, you know, you can fail… The only way you stop making progress, is if you stop. My sense is, that just because I have envisioned something here, things will develop the way they're gonna develop. I've learned to let go and not to control every aspect of everything."

Before The Back Door, there was the VFW Hall

Van Cel has owned the building since 2008. But for nearly 70 years before that the hall was occupied by the Veterans of Foreign Wars, Post 604. While Van Cel did update the building after the VFW left in 2010 he wanted to retain some of the history of the building.  A worn out circle still marks the spot on a small stage where for decades bingo numbers were called - in the basement, pews and hand painted signs are waiting new life.

The space itself is still recalls an earlier era, and it is this aesthetic that makes it attractive to some. When asked what he liked about the space, Kennedy responded, "The dynamic architecture of this place, this ex-VFW lodge. The walls are paneled, there's cinder block behind it, the space is set up so traditionally. There's so much you can do with it."

What will the arts community do with the new space?

Lori Canada, who organized the event recognizes that for The Back Door to take off as an arts venue it will take interest from the arts community itself.  She says it will need, "Other people who have enough interest in this madness, to want to devote a lot of unpaid time to organizing this kind of stuff. And really that is what it will take, because this is really, just the space."

If Friday's event was any preview for what might come, Bloomington now has a space for new work and experimentation.