Urinetown : A Cautionary Tale For Our Time 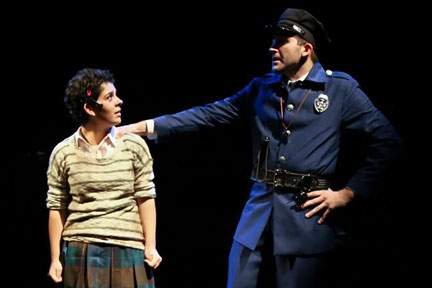 Saturday night when I arrived at my usually plenty early time of seven o'clock for  the seven-thirty performance of Urinetown at IU's Wells-Metz Theatre, I was greeted with a sign that said the show was sold out and a two by two line that stretched all the way to the outer doors. The combination of a musical and a small theatre has added up to an entire week of sold out shows. The second balcony of the Wells-Metz is for people who really like the Goodyear Blimp's view of football shots even it was packed.

The premise of Urinetown is that a twenty year drought has led to such a water shortage that private bathrooms have been outlawed.  A giant corporation has cornered the market on public toilets and succeeded in having laws passed prohibiting peeing anywhere else. In part the musical was inspired by the author's short of francs experience in Paris. As the show begins, Officer Lockstock the narrator agrees with Little Sally, the people's voice, that it's a silly premise, bad subject matter and an even worse title. Frankly, even with the silliness, the central drought in the play leads one to think of our current hurricanes, floods, wild fires, melting glaciers and the global warming that still has so many in denial.

Urinetown makes fun of itself and musicals in general and it goes out of its way to keep reminding the audience that there is some thought be had from the scenes. The narrator and even some of the other characters tell us that they are just actors playing stock characters in a play. Actors speak directly to the audience. The sets are minimal and in several instances set pieces  are simply moved around during a scene again in an effort by the director to distance the audience.

The nicely crafted music is reminiscent of other musicals. Hope, the innocent daughter of the corporation's president moves gracefully from ballad style to operatic ornaments and sings a heart song duet with Bobby, the people's hero. There's a darkly comic "Don't Be the Bunny" from the corporate leader Cladwell, his legislative flunky Senator Fipp, the police enforcers and the bathroom matron, Pennywise. With Hope as a hostage, the poor people's mindless rage predominates in "Snuff That Girl." Bobby leads a gospel chorus of ‘Run, Freedom Run!" In a theatrical tour de force it seems as if every part of the play and each character passes in a pastiche of scenes in "Why Did  I Listen to that Man!"

With Bobby's death and the poor folk led by Hope take revenge of the people on the rulers and even her father. Cladwell and the bathhouse matron sing a reprise of the people's "We're Not Sorry." As the businessman notes "there's nothing  better for the regulation of consumption than the mechanics of cash." It's a chilling note for those of us with health care concerns.

The finale of Urinetown is a rousing "I See a River" as the people, victims of unbridled consumption die of thirst. Reminding us that although this is a musical,  there's a police state on one side and mindless though heartfelt anarchy on the other. It's an ironic and a dark one.

The cast is a strong one and many of the secondary characters handle several roles with aplomb. Jimmy Hogan was a smooth singing dynamic leader as Bobby. Janie Johnson made a sympathetic figure as the innocent Hope and handled the coloratura nicely. Connor Bernard was very good as the narrating Officer Lockstock and dryly humorous with his partner Rebecca Dwoskin as Little Sally. Dom Pagliaro was smoothly evil as the business leader Caldwell B. Cladwell.  Michelle Zink sang strongly as the bath house matron Penelope Pennywise. Jake McCutcheon was nicely balanced as the unscrupulous Senator Fipp.

The show is directed with skill and choreographed with everything from ballet to tap by Kenneth L. Roberson. Music director Terry Labolt was part of the show as he was chased up to his place at the keyboard by one of the show's policeman to conduct the unique ensemble of clarinet, sax, trombone, bass and drums. Ryan Miller did the flexible scenic design. Linda Pisano costumes ranged from dirty rags to snazzy dress suits. Tony Stoeri's lighting highlighted the action. Andrew Hopson's sound design kept all the dialog and music balanced.

You can find this review and other reviews and interviews at WFIU.ORG/arts. At the theatre for you, I'm George Walker