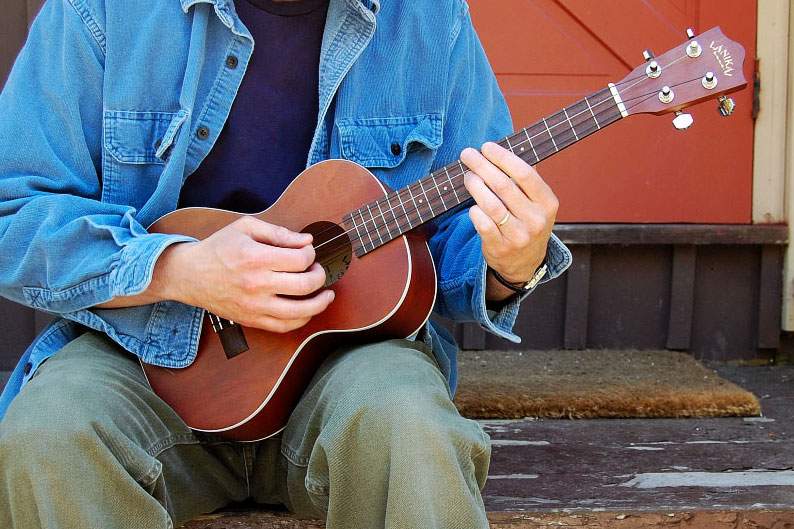 Making Her Own Music

"The ukulele goes in phases of being mocked to being adored again," says Ellen Campbell, co-founder of the Bloomington Ukulele Club.

She never faltered in her love of the instrument, however. Growing up, she was a fan of performers like Tiny Tim and Neil Innes. It was after watching videos of The Ukulele Orchestra of Great Britain that she found the motivation to pick up the instrument herself.

She enrolled in Beginning Ukulele at the People's University to learn the basics. After the class ended in late 2010, "several of us in the group just loved it so much, and we said we can't stop now."

Uke Throughout The Years

The ukulele was brought to Hawaii by Portugese immigrants in the 1880s. It became popular in the United States in 1915 after it made an appearance at the Panama Pacific International Exposition in San Fransisco. It increased in popularity after World War II thanks to performers like Tiny Tim, Ukulele Ike and Roy Schmeck.

As rock 'n' roll took hold in the 1960s, interest in the ukulele died down. By the mid-1970s, manufacturers like Martin and Gibson had stopped making the instrument leaving Kamaka in Hawaii the only remaining ukulele company.

The latest resurgence started in the early-1990s with musicians like Israel Kamakawiwo'ole and his popular rendition of "Over the Rainbow." Now, contemporary performers like Jason Mraz, Eddie Vedder and Mumford & Sons are putting out music that prominently features the instrument.

Mike Hater of Mainland Ukes in Nashville, Indiana is reaping the benefits of all this ukulele love his business is booming.

"It's been really snowballing," he says. "We're having a hard time keeping up with demand."