Richard, tell us just a little bit about directing for radio.

Richard Roland: Oh, where do I begin? It's actually a. It's a pleasant surprise. I went into this completely. If you will blind with advice from colleagues that had directed for radio and audio. I was surprised that, well, I still had to do the same amount of preparation and get to know the stories the character wants and needs and motivation. But at the same time, I had no prep work in terms of blocking, staging how to stage transition.  So, I found it actually very liberating. That we just were sitting in a room concentrating on what somebody’s voice sounded like and what information we were getting just from that.

George: Where were your actors situated?

Richard: Everybody was remote working from their own home. Chris had set up a sort of a cage for himself with blankets and baffling equipment. Other actors sat in closets with blankets over their heads. It was it was entertaining when we had the cameras on watching people do takes.  We were all over the place. One of our cast members was in Illinois. One was in Ohio, the rest of us are in  are here in Bloomington.

George: Chris, tell us just a little bit about acting for radio.

Chris Plonka: Oh yeah, so there's obviously the big difference of that. You can't show people what you're doing. You have to make sure that everything you're doing is communicated through the voice. Of course, that means you have to go even further, sometimes with the physicality of what you're doing, The physical. apparatus and how you move your body and how your posture is constructed does a lot to change how your voice comes out. So, you oftentimes have to exaggerate it even. Further, for this piece in particular where we were playing multiple roles, I had to come up with a bunch of really different, distinct physical positions to put my body in to make sure that the voice came out consistent, and I had a little cheat sheet for myself like for this character. I do this. This is the placement of the voice. That way I can jump right into it when I need to.

And from there you just have a lot of fun with it and like OK, So what if I? What if I just like go off on the right side a little bit here? How does that then affect the air flow going up? Does that? Great weird breathiness, does that create something pinched in the voice? Is that something interesting to play with, but otherwise it's the same thing. You gotta’ figure out what is your characters objective. Who are they? What are the relationships? The people in the scene? What do they want? What do they do to get what they want and you just gotta’ go even further than you might? And if people can see you? Because it has to be communicated solely through the voice.

George: How many characters are you playing Chris?

Chris: I had, four and we added the announcer yesterday, so one. I want to say five. I think that sounds right to me.

George: And you had five physical presences. Yes, to to do that?

Chris: Actually a few more 'cause some of them kind of shifted as we went. Depending on the descent into madness as we see in a lot of Poe work.

George: Wow, Richard, tell us just a little bit about directing Chris in this particular endeavor.

Richard: First of all, I've loved working with Chris. We had a great time working on Little Shop of Horrors 2 summers ago. First of all, this is a wonderful medium for crisps. I think he's great on stage. He's also great in the voice studio. I think he's going to have.  a fantastic career as a voiceover artist. There wasn't much directing to do. He comes to the table so prepared and has distinct different voices. Already thought of for these characters and I think my direction only had to come in small nudges.

It was never about the quality of voice, but sometimes I would have to say something as simple. As you know, could you just make this the operative word in the sentence? 'cause then I think that's going to paint the picture for us. ,Now, if I said that in the physical rehearsal studio, and I'm saying you know you need to punch this word, I think there's better ways to say that as a physical director as opposed to an audio director. So I don't claim to be an audio director. I would love to do. More of it. It's great fun and Chris just made it so easy.

It’ll be on WFIU2 on Saturday July 24 at five and on WFIU on Sunday at six. 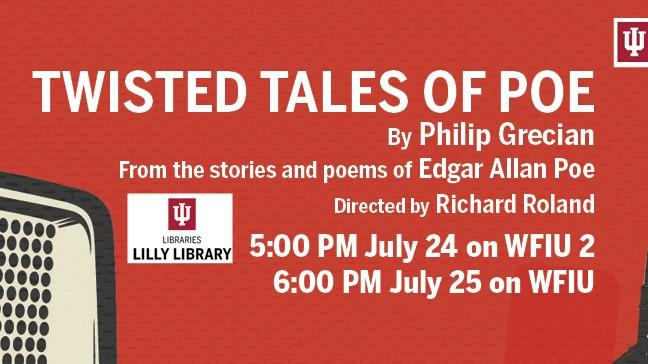 It’ll be on WFIU2 on Saturday July 24 at five and on WFIU on Sunday at six.