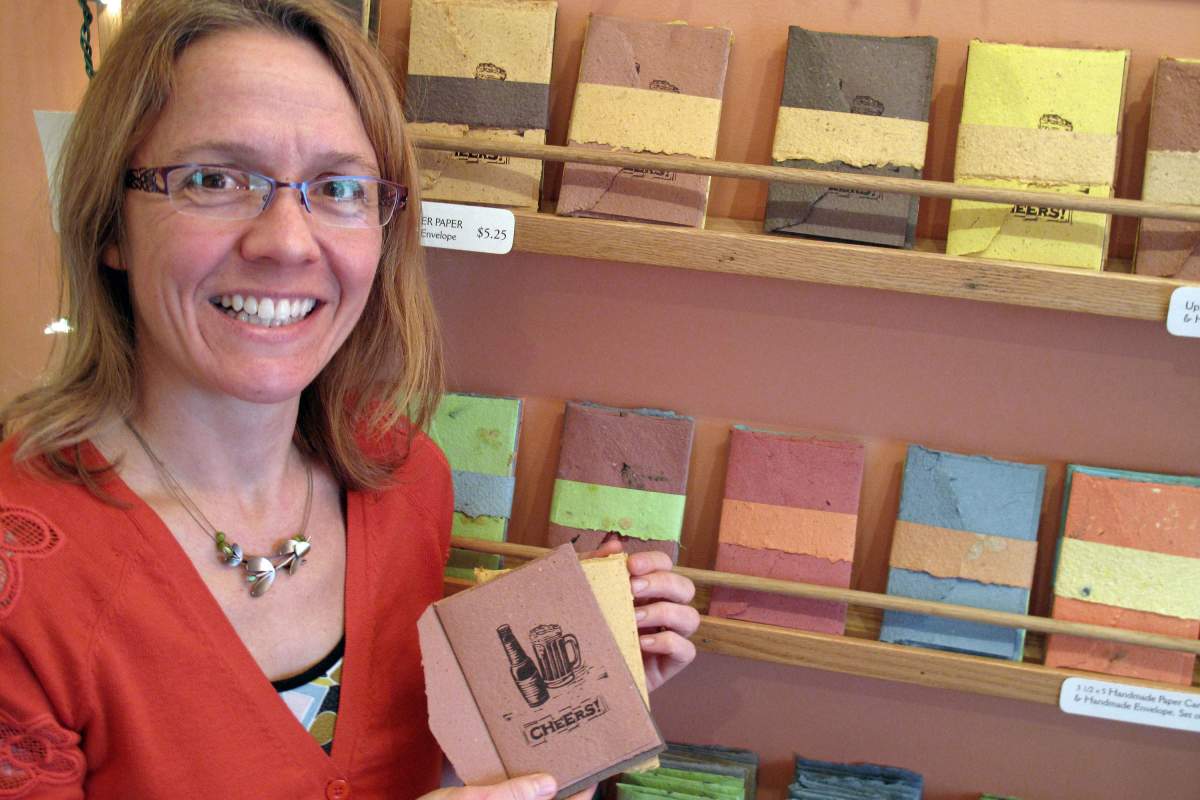 Sometimes more unusual materials, like grass clippings, find their way into the paper. Most recently, they've started using the spent barley from Upland Brewing Company to create "beer paper" – a process that is garnering national buzz.

Sheryl Woodhouse-Keese, the founder and owner of Twisted Limb Paperworks, says she's being contacted by beer clubs and breweries all over the country that want the beer paper for invitations, thank you cards and menus.

Naturally, she is trying to keep the details of her paper making process hidden from potential competitors.

"It's tricky because you want to shout about it and tell everybody because everybody loves it," she says. "That's just part of being in business, though, that once your put the idea out there it's sort of fair game and at least you can say you were the first."

One Man's Trash Is Another Man's Treasure

The idea for beer paper was formed when she was trying to find a uniquely local spin for her business. She considered incorporating the algae that was growing on Griffy Lake in her products, but that idea fell through.

It was after attending a community meeting with President of Upland Doug Dayhoff in attendance that she decided to pursue the possibility of using barley. Upland produces 20,000 pounds of spent grain on an average week. Twisted Limb takes a small fraction of that, two 5-gallon buckets, with the remainder of the waste going to a local farmer and a landscaping company.

Woodhouse-Keese says Dayhoff warned her that the barley smells terrible. She was undeterred because they are used to having odorous products in the workshop. "But I'll be honest, the barley takes the cake," she says. "It smells worse than anything anything in 14 years that we have ever experienced."

Once she figured out how to store the grain, the next step was finding the proper ratio of barley to recycled paper, because Keese determined she couldn't make paper from barley alone. After some experimenting, she came up with four beer-inspired colors: wheat, pilsner, amber and porter.

They already produced paper close to the colors they envisioned for the pilsner and porter, "and we guessed and we got it right on the first shot."

The amber and wheat colors have proven more difficult. Keese is especially invested in making the amber color just right, "given this is my favorite beer. I'd say I have it 99-percent where I want it to be."

Hoping to read the recipe for making beer paper? Fat chance. It's the amount of which colors of recycled papers she uses that Keese is especially concerned about keeping under wraps.