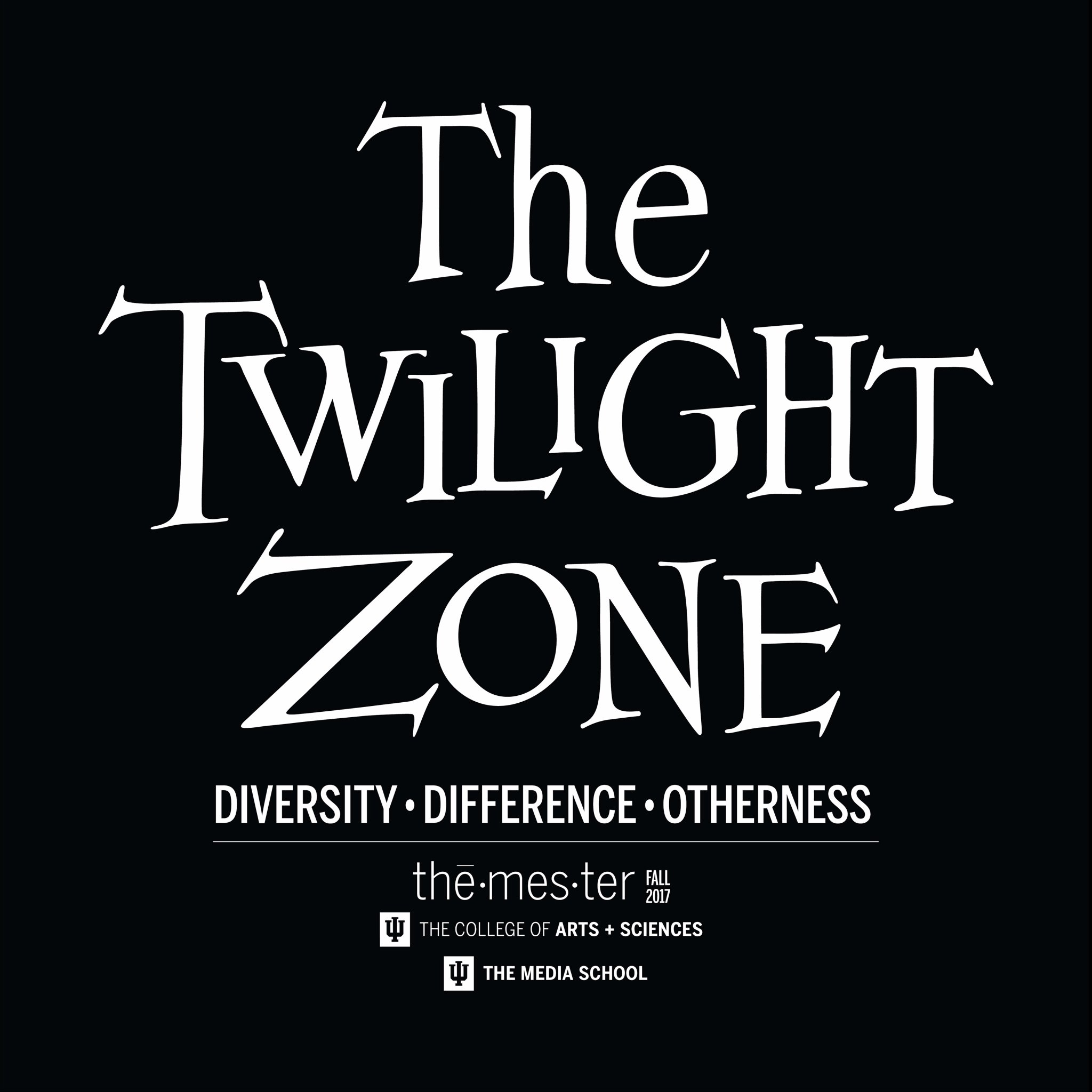 The Twilight Zone, a popular science fiction television show that first aired in the 1960s, is famous for its sinister stories and for the way it used science fiction storytelling to explore social and political issues of its day. Steve Kranke, Indiana University Media School professor and accomplished Public Television Producer, sees The Twilight Zone as a product of its time, and says that the show wasn't about aliens and it wasn't about monsters.

"This was about us," Kranke says, "and all of the stories were really about us. That's important because this took place kind of in the aftermath of the McCarthy hearings, and the Red Scare, and the beginnings of the Cold War. So paranoia ran deep. Not only were people afraid, they were afraid that they weren't afraid. They thought they should be afraid of something, and so they started making up things to be afraid of. And a good metaphor for that was always aliens, and that ended up being what most people think The Twilight Zone as being about."

Kranke, however, doesn't think of The Twilight Zone as an antiquated series that has nothing to offer today's viewers. He made this clear when he submitted a proposal to teach a class as part of this year's IU Themester project that would revolve around the series. This year's Themester theme of "Diversity and the Other" prompted Kranke to create The Twilight Zone Project, a Media School class that's goal is to remake three episodes of the original Twilight Zone television series with a crew and artistic team of Indiana University media students, and a cast of both community and university actors.

Russell McGee, WTIU's on-air promotions director, is the director of Will the Real Martian Please Stand Up, one of the three Twilight Zone episodes being re-imagined by the project, in which a group of airplane passengers realizes they have an alien in their midst.

Kranke, McGee, and the rest of the artistic team set out to put together three student-lead production teams (one for each episode), and a production plan, that would give students as many opportunities as possible to immerse themselves in the process of producing a television show. They'd do a regular taped version of each individual episode. Then, an in-studio taping of each episode, in front of a live studio audience.

"The live experience," McGee says, "is to give the students that kind of production experience, because most of them, when they are actually working on the productions here at the university, don't have that experience. If they were to work on a sitcom out in L.A., they would have a studio audience there that they would get to work with. But, here in Bloomington, this is the only time this has been done in recent years. So really it is a once-in-a-lifetime thing for many of the students."

Julia Weinstock, a sophomore at Indiana University in the Media School, was first a casting director for the project, and then was brought on as an assistant director for the Martian episode by Russell McGee. This project has opened up a whole new world for her.

"I've always had a flair for the dramatic and for theater," Weinstock says. "I did theater from age 6 to age 18 and then I realized that I really like the behind-the-scenes sort of stuff. I thought it was only live theater and then last spring my advisor said, 'I really think you should do this class,' and I said, 'Oh I've never had a production class before.' She said, 'Just apply and see if you get in!' And I somehow got in. I started out as the casting director, and helped cast (the shows). I cast Martian and worked very closely with Russell for the first couple of days - both 14 hour days - and at the end, he said, 'Do you want to be my assistant director? I think you can do it.' It's completely confirming what I want to do and it's opening a new door. I like the idea of theater but I also like the idea of TV and movies and it's really cool that I get to be a part of it."

For Weinstock, the lessons she learned during the project were both expected and unexpected. "You expect to learn that you're going to have to be in contact with a lot of people at all times, but I didn't expect it to this extent. I don't really know why but I was thinking of it more as just a school project, and now I'm seeing it as an internship more than a class. I wasn't expecting it to be so immersive, but it's really, really cool how much I'm learning."

Weinstock is just one of many students for whom this project is a unique and valuable experience, McGee pointed out. "You have young writers working on these and adapting them from the originals," McGee mentions. "The whole issue of race with this episode (Will The Real Martian Please Stand Up?) wasn't something that was in the original script, it was something that, because of what is going on with the Middle East, (the student writer) wanted to address so she could talk about the fact that you have these stereotypical ideas about what people are, and who they are, and how we react to that as a society right now. So I think that really empowered her as a writer to be able to bring up those topical issues."

This episode of The Twilight Zone Project, "Will the Real Martian Please Stand Up?", requires the cast and crew to film inside an airplane. The student crew learned on their feet, arranging permission with the local Bloomington airport to film on one of their planes, and in their airport – and coordinating the transport of a huge crew and all the filming equipment to and from location."Twenty-six to twenty-nine students were out in the field shooting at the Bloomington airport," McGee recalls in an interview before a recent rehearsal, looking to his student crew for affirmation. "We had students working in audio positions, students working is gaffers, some worked with lights. You had grips, electricians, people pulling cables, you had a script supervisor, and many others. Even (student) actors have been given an opportunity in this as well. So, it really has created a lot of different roles for students to immerse themselves in an actual production experience."

The Twilight Zone Project held open auditions for IU students and the general public in October to cast each of the episodes, and McGee says that having a larger pool of talent to choose from was invaluable for the students, giving them an opportunity to do some real, and less limiting, casting. "If you were just using talent from the university," McGee speculates, "you are going to have a bunch of twenty-somethings, and more females than males, and not as diverse a talent pool to draw from. It also allows the students to be able to cast actors that are more age-appropriate so that they can not have to worry about writing specifically for just 20-somethings and it allows for more diversity in the casting."

This decision to bring in talent from the community turned out to be valuable, both to ensure great performances in episodes themselves, and as a learning experience for students like Julia Weinstock, who learned how to command a room full of actors of varying ages, and experience levels.

"It's a very interesting mixture," Weinstock says, "because you have friends that are in it, but then you have professionals who are older than you and have more experience than you. So, at first, I had to create this balance of 'I don't want to tell you what to do because I'm younger and I don't have as much experience as you do,' or, 'because I'm your friend.' I learned to shut that down, to take charge. So, I'm sending out emails to people who have been doing professional theater for 20 years and I'm, like, 'Here's the schedule! Here is what you need to do! Great job doing this but you need to fix this!' So, it's a very cool mixture and then also doing it with your friends is very neat."

Russell McGee says that, despite the new wave of popular Sci-Fi shows like Stranger Things, Black Mirror, and Westworld, he has no idea whether his students will have the opportunity to work on more Sci-Fi show during their careers. He does believe that Sci-Fi will always have a place in people's hearts, and in Hollywood.

"I think that Science Fiction will always have a place in society as a way of being able to reflect on what is going on, you know things that are happening in the world," McGee says. "I think right now the resurgence of Sci-Fi does reflect on what is going on in the world because again as I said you can address harder hard-hitting issues that are happening today without having to hit it right on the nail."

"The Twilight Zone has always helped people explore society, the downfall of society, and things that we do wrong; the Judgment that we cast on others," Weinstock says of the show she's worked on for almost the whole semester. "I just think that when we, the younger generation, watch it we don't really think of that, because some of the themes [in the episodes] aren't as prevalent for us, or they are not portrayed in a way that we find interesting, so it kind of goes over our heads. But, The Twilight Zone has always touched on this subject of finding a scapegoat in somebody who is not the same [as everyone else], so we took that element and we sort of amplified it in a way that would make it make sense to the majority of viewers now."

"Those stories are still relevant today as they were when they came out in the 1960s," McGee says of the stories told in the original Twilight Zone television series.

"There is a reason why there was an '80s version of The Twilight Zone, a '90s version, and a movie version. Leonardo DiCaprio was talking about bringing back one of the stories, To Serve Man,  as a movie. These stories always talk to the common people. There are themes and ideas that speak to people even now today because they are still relevant."