Twelfth Night At IU, Easy To Laugh At, Hard To Talk About 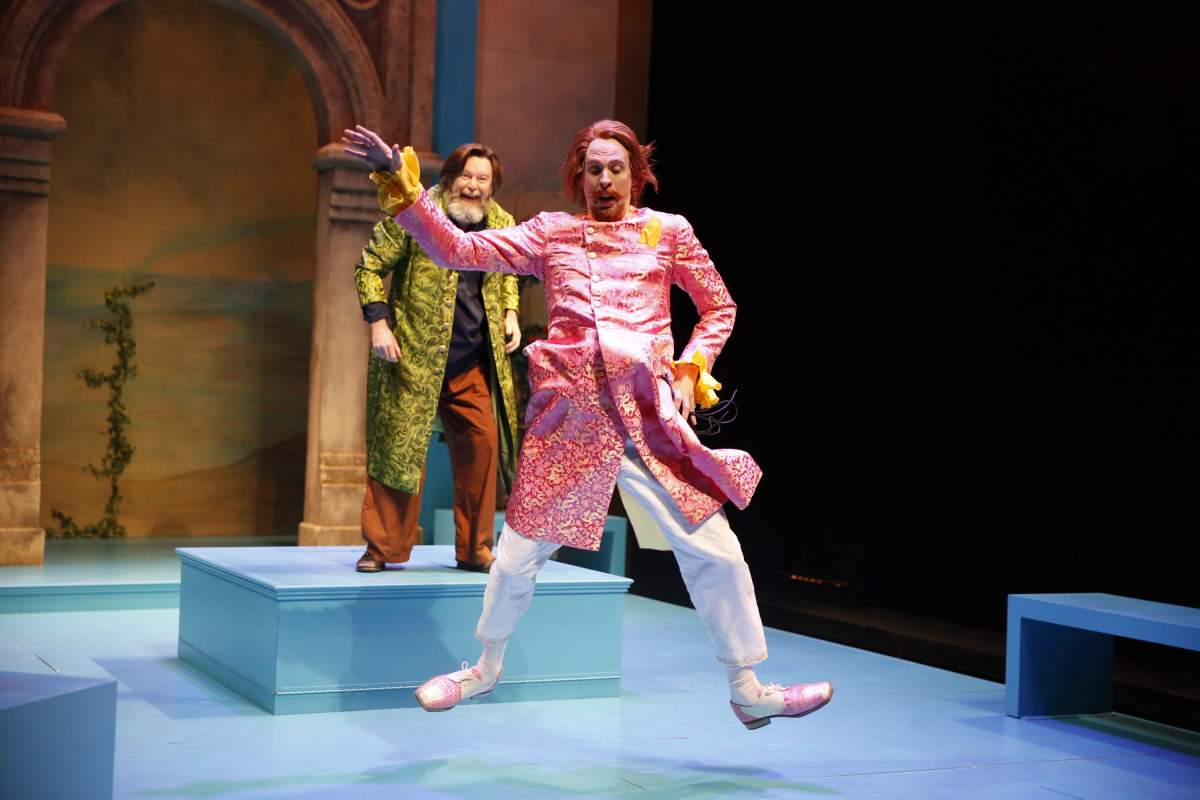 Ah, Shakespeare's comedies…great fun to see, hard to describe…will there be confused identities? certainly…will there be cross dressing ?, perhaps… buffoons ?, quite likely…multiple plots? You bet… will there be a wise fool? probably…a finale of marriages?, of course.

The IU production begins with the thunder and lightning of the storm which wrecks a ship carrying Viola, Hillary Clemens and her twin brother Sebastian. The wreck casts a very wet Viola onto the beach of Illyria. For safety she dresses as the young boy Cesario and while lamenting the possible death of her twin brother enters the service of the melancholy Duke Orsino, Ian Martin. So, yes to cross dressing.

Although deeply smitten with the Duke, it is Viola's task as Cesario to take his wooing to the hitherto unresponsive Countess Olivia, Jenny McKnight. Love happens quickly in Shakespeare comedies and Countess Olivia is equally smitten with the cross dressed  Cesario. Hillary Clemens makes a delightfully confused and confusing young man while McKnight is equally delightful as a too much in love lady.

All the while, in the Countesses home the buffoons Sir Toby Belch, the redoubtable David Kortemeier and  his gull Sir Andrew Aguecheek,  the very amusing Ben Abbott are riotously roistering in company with the maid Maria, the clever Mara Lefler.

For a bit of fun on this twelfth night, the three along with a fourth, the flexible Fabian, Tim Pyles,  concoct a note to convince Countess Olivia's egotistical steward Malvolio, Rob Johansen that the lady encourages his suit. The note suggests specific acts on his part. Watching Johansen act out the direction including the torture of putting a smile on his usually dour face is just an amazing piece of theatre and very funny. So, yes to multiple plots.

EarIy on I did mention confused identities didn't I? Well, yes to multiple plots. Viola's twin brother Sebastian, David Gordon-Johnson and his savior Antonio, Adam St. John do appear.  There's a bit of confusion as Antonio mistakes Viola/Cesario for his beloved companion and further confusion when the buffoons mistake the submissive Viola for her much more aggressive brother.

Ah, the wise fool. Equally at home in the Duke's palace, the Countesses home and on the road between is Shakespeare's wonderful wise fool Feste, the multi -talented Nat Zegree.  Zegree composed and performs music for the play. He entertained the preshow audience with an acrobatic and involving clap along and offered an acrobatic percussion show to begin the second act.

For a Shakespeare comedy one marriage never seems enough. Twelfth Night is no exception. The smitten Viola marries the Duke. The equally smitten Lady Olivia marries Viola's twin Sebastian. The clever Maria marries Sir Toby and as the play comes to an end, Feste the clown leads the entire cast in a final song.

Shakespeare's Twelfth Night at the IU Festival Theatre continues in repertoire with The Miracle Worker through July 26.