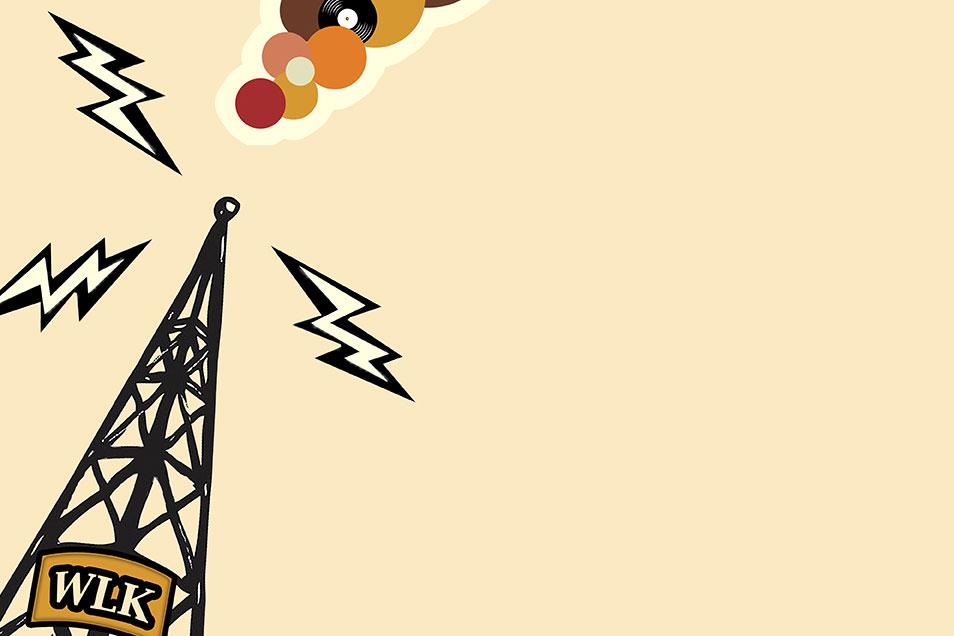 The Bloomington Playwrights Project presents Tuning In, a new musical set in a radio station owned by a retirement community in their Ted Jones Theatre. The dates are November 30 through December 15 despite the addition of an extra Wednesday outing, tickets are in short supply.

Tuning In owes its origins to the friendship of former IU faculty member George Pinney with Sara and Larry Kass. The show’s book is by Pinney with Ron Newell, Sara and Larry. The music and lyrics are by Larry with help from Sara. Larry Kass is a doctor by day and a songwriter and performer with more than 5,000 songs to his credit. Sara is an award winning artist and the show’s executive producer.

The evening at the BPP began convivially enough with managing director Brad Scheisser reading a story that somehow managed to mention all of the show’s sponsors and supporters in pleasantly diverting ways. The BPP is always thinking up clever ways to say thanks.

Apparently the retirement community that runs WKL is rich with talented residents who’re retired, but are still more than able to sing and dance. Their first number features Ansley Valentine as an old hoofer, Heather Narducci as a singer and tarot card reader, Daniel Narducci as a former opera singer and matinee idol and a cane leaning singer Janiece Jaffee. Brandon Magid leads the station’s resident trio. Talent, this place has.

As if on cue, Connie Shakalis makes a glamorous entrance as a former torch singer and potential resident. If you go, keep an eye on her because she has the show’s clincher.

We also meet Nathan Mittleman as the station’s uptight engineer and Johan Robert Armstrong as the station’s worried manager. There’s also a youth element in the show with Brandon Magid, Kat e Scarlet Swaney and Victoria Wiley as three collegians who’ve come to study and later assist the station.

So far so, good. The station manager is worried because the corporate owners, in the menacing person of Dom Pagliaro would like to get a bit more profit from their license with talk and rock and roll. He’s supported in “Don’t Waste Any Time,” the show’s only dynamic and exciting number by Emily Rozman as his longtime assistant and local boxing manager.

Tuning IN’s plot offers a couple of moderate tensions. Will Ansley Valentine’s counsel that Dave the shy engineer should use his tap dancing skills to over-come his shyness work. Might, it lead to a tap dance duet with Katie Scarlet Swaney? Will the collegians inspired fund drive save the station from Dom Pagliaro and rock and roll?

Since this is a family station and we can only handle moderate amounts of tension, I’ll simply say that as we might expect, the tap duet happens. Saving WLK turns out to be a bit more complicated. The fund drive is a success but far short of back debts. However, it seems that Connie Shakalis’s former husband is a millionaire, and in a move that would confuse some of our current leadership, pays off the mortgage and endows the station. The happy finale features all except the rep’ from corporate.

Scenic Designer Christopher Rhoton has done a lovely job of recreating a very gracious radio studio from the 1960s with a swinging wall that quickly turns the set into the station’s office. Costumes that help tell the characters’ stories are designed by Scott B. Jones. Chris Woods’ lighting is especially dramatic in an almost Brechtian scene with an almost demonic Dom Pagliaro as the evil corporate owner.

The Bloomington Playwright’s Project’s presentation of Tuning In plays November 30 through December 15.