The Ecosexuals: Tree-Hugging And Then Some 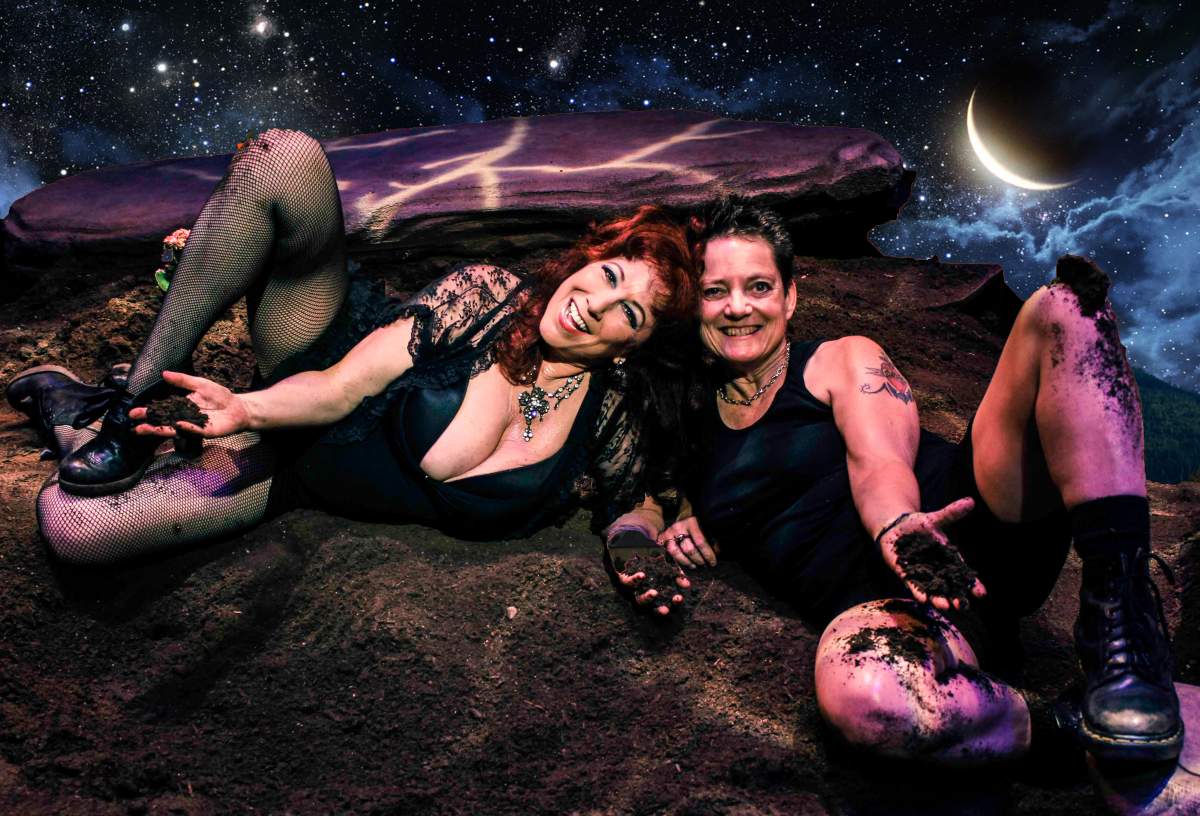 YK: You're partners in life, in art and in activism. Anyone who runs a Google search for you will end up with a lot of pictures of the two of you out in the wilderness-half nude or wearing fanciful costumes. There's a lot of humor in the work you're doing, a lot of play. Â Which is very appealing. because especially when it comes to feminism and environmentalism, humor can be in short supply. So I'm wondering, are you two taking the tack that you are with regard to these issues exactly for that reason?

Annie Sprinkle: Did you see Mary Poppins? "A spoonful of sugar makes the medicine go down!" Yeah, we want to have fun while we're doing serious activist work.

People roll their eyes when you say "eco". They think, you know, Birkenstocks.

Beth Stephens: I think using humor also surprises people and it creates an opening for a moment where something can come through; whereas when we're scolding, people shut down.

YK: Annie, humor has been a long-running tradition in the work that you do. You're certainly best known for your performance piece, Post Post-Porn Modernist. Maybe you can take us back to that theatre piece and explain what you were doing, what your strategy was.

AS: Well from 1974 on for about 22 years, I was mostly in mainstream adult entertainment pornography and sex work of all kinds. And so at a certain point I did a theatre piece about my life in sex work. It started at The Kitchen in New York, and I ended up touring 19 countries over five years. It was a kind of deconstruction of sex, a peek behind the scenes. One of the scenes I did was called a Public Cervix Announcement, where I very innocently and playfully inserted a speculum and invited the audience to come see my cervix. So that's a more known piece, but I also did the Legend of the Ancient Sacred Prostitute, which was a kind of sex magic ritual, and the audience all had rattles, and I got them building energy. Â It was a very successful show andI'm really amazedit's studied in a lot of performance art classes. I'm very proud of it.

YK: So tell me about eco-sexuality.

AS: People roll their eyes when you say "eco". They think, you know, Birkenstocks.

We're really trying to pull people out of their office, and out of their Facebook account, and take them out to hug a tree.

BS: We're thinking in terms of shifting the metaphor from Earth as mother to Earth as lover, because we feel that we can engage a more mutual relationship with a lover than we can with a mother

AS: So Beth and I will take people on a walking tour of Central Park next week, and people will find their "e-spots"eco-sexy spotsjust looking in nature, and saying "Wow, look at this bee pollinating this flower. Look at that!" Like, if you like wind-you know on a motorcycle, wind in your hair, it's acknowledging that that's sensual. Or if you're into rain, you might be a pluviophile, or dendrophile, or pyrophile.

BS: And I think as we move into a more technological era, that more and more people are withdrawing from the natural, physical world. And they're really investing their energy into this virtual world. And we're losing the ability to care about our Earth. So we're really trying to pull people out of their office, and out of their Facebook account and take them out to hug a tree, because I think once you understand that the tree has a life force-a real life forceyou think twice about cutting it down to make paper or create land for industrial farming. You really have to have a personal, physical connection with something to care about it. So we're trying to make people care through pleasure, and through humor, and through sexuality, but our goal is really to try to wake people up and make them care about the physical Earth.