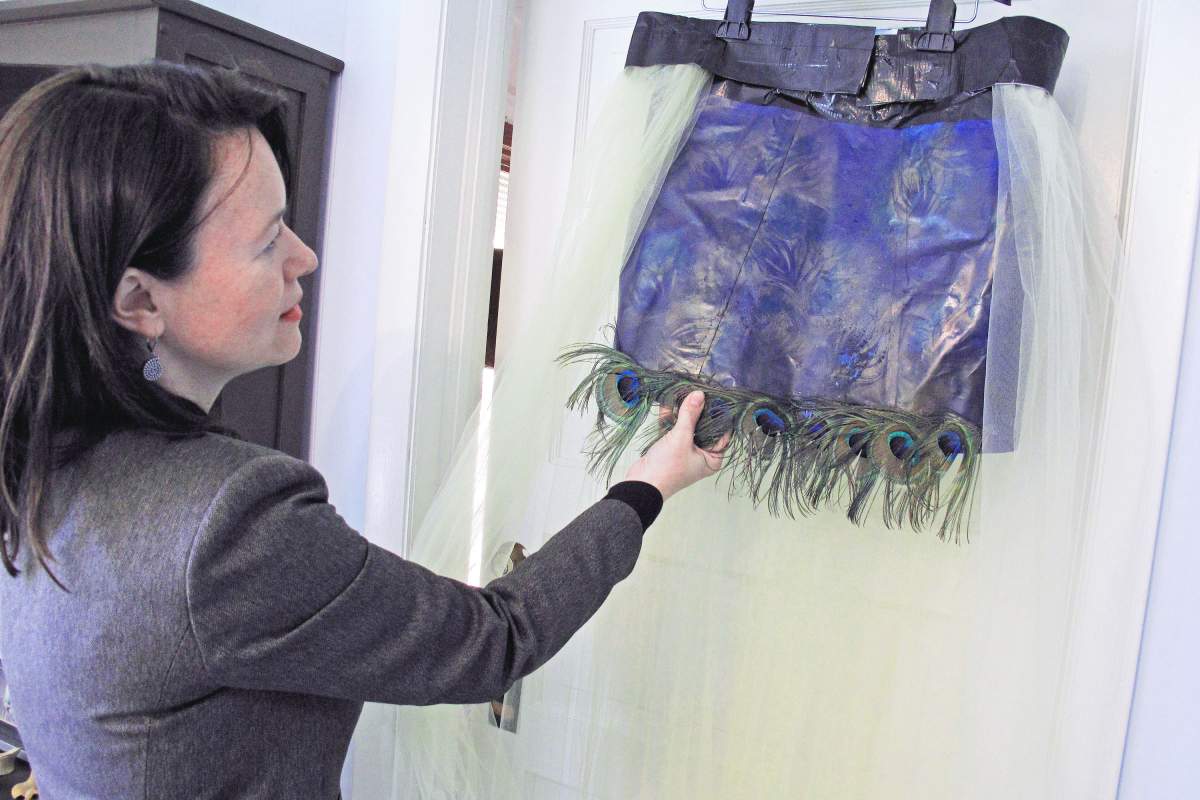 According to the EPA, Americans produced about 250 million tons of trash in 2010 or about 4.3 pounds of waste per person per day. In Bloomington, eco-conscious designers and artists are coming together to reduce those numbers and create something beautiful in the process

All Things Are Fashionable

This is the second year Linda Hanek will be designing garments for the Trashion Refashion Show. Her outfit last year was made out of dryer sheets. This year she's using coffee bean bags, peacock feathers, tulle and duct tape. "I always have things like that on hand," she says, "so it's great to go into my mudroom and find things."

The juried show is comprised of two categories: Trashion (creatively turning discarded items into fashion) and Refashion (modifying existing clothing into something more fashionable). Designers must use 90 percent recycled materials in their garments. In previous years, designers have utilized trash bags, pastry wrappers and all types of recycled paper products.

When designers ask her where they should source their materials, Leimkuhler tells them to look around their house:

It's amazing how much stuff we get rid of and we don't really think about. We're sending it off to the Goodwill or we're putting it in the recycling or even throwing it out, but there are a lot of materials that we no longer have use for that can be really interesting in another form.

Artist and first-time Trashion Refashion designer David Ebbinghouse couldn't agree more. "We've got all this stuff in our society that we consider to be trash, but we pay people lots of money to design it, and we put a lot of money into the packaging then we just toss all this out."

He'll be showing several garments in this year's show, one of which he'll be modeling himself. For him, the dumpster couture mentality is a way of life. He found almost his entire outfit today - his shoes, pants, shirt and jacket - in dumpsters. "The hat, I bought," he says. "If I could find a nice hat like this from the dumpster, I'd be in heaven on earth."

He didn't have to re-imagine his work to participate in the show. He's been stockpiling discarded items and making art out of them for 20 years. Some of his most fruitful dumpster diving trips have come after basketball and football games when he collected the bags of empty beer cans. All it took was an extra turn of the wrist to remove the pop-tops before he recycled the cans. The result is a series of necklaces made out of several hundred interlinked pop-tops.

Green fashion is also making waves in the place where glamor is king: Hollywood.

In 2010, Livia Firth, wife of actor Colin Firth, founded the Green Carpet Challenge, which encourages designers to create environmentally conscious awards-season garments. So far the challenge has been accepted by the likes of Julianne Moore and Meryl Streep.

It's because of exposure like this that Leimkuhler believes trashion is a movement on the rise.

"A lot of people think it's just a fun event and you can make some crazy art outfits out of if," she says, "but it's also becoming trendy to have greener clothing, which as soon as that becomes trendy it can really permeate the market."