The Threepenny Opera at IU Theatre

The IU Department of Theatre, Drama and Dance  presents The Three Penny Opera by Bertholt Brech and Kurt Weil in collaboration with Elizabeth Hauptman. It’s based on The Beggar’s Opera by John Gay from 1728.  Simon Stephens adapted it in a translation into more modern English. Now that I’ve gotten your attention, let me offer you the IU Theatre’s run down.

Jamie Anderson, a grad student is the director with musical direction by faculty member Terry LaBolt, there will be more about these two later. DJGray, another faculty member is the choreographer and there’s lots of dance moves in the show. The scenic and projection designer is Valeriya Nedviga and there’ll be more about her later. The many-many costume designs are by Bittany Staudacher…wow! The Lighting designer is Lee Anne Meeks with the sound design by Grace Leckey.

Keeping The Three Penny Opera together is the stage manager, Jorie Miller.

Now to the cast: Michael Winner is our engaging Balladeer. It’s Michael who talks with the audience and also shows posters of appropriate audience reactions. He takes all the graphic pictures with his view camera and flash on a stick. He also gets involved in the action from time to time.

Mr. J.J. Peachum, Roberto Russo and his wife Mrs. Celia Peachum, Catherine Barker run the gang of beggars that populate London’s Streets. Both the Peachums have it in for Captain MacHeath because he’s going to marry their daughter Polly, Cynthia Kauffman. It’s not the assignation that they object to it’s the marriage and the wedding.

Charlie Filch, played by Noah Marcus,  wants to join the Peacham’s gang and suggests that shouldn’t he “just be himself.” The Peachum’s say that there are just four beggars roles to be played, and they had better be chosen carefully.

MacHeath appears and as the song says, “just a jack knife has MacHeath got, and there’s never a touch of red.” He and Tiger Brown, Christopher Centaro reminiscence about their of days in Africa  with the Cannon song about those far away days when they would “wander into town and if the population should greet them with indignation, they’d chop them to bits because they like their beef-steak tartare.”

Our hero does marry Polly but there are flirtations with Betty, Kate Glaser, particularly painful, as pointed out by our Balladeer.  With Lucy Brown, Tiana Williams Tiger Brown’s daughter, and Jenny Diver, Casey Jun Hyun Kwon. It seems that MacHeath is engaging in multiple matrimony. He’s headed for Dover at Tiger’s suggestion, but just can’t seem to get there.

I just can’t keep from mentioning Caroline Santiago Turner and Natalie Stahl as the two tap dancers that flank MacHeath in one of the numbers….what a pleasure.

At the end of the show, MacHeath is in jail and the jailor, Shane Stoltz offers to free him for a lot of pounds.  The pounds aren’t forth coming and MacHeath is scheduled to die on the scaffold. Eventually, they decide that The Three Penny Opera has to have a happy ending. King Edward, Malachi Watson arrives with a fanfare and offers MacHeath money and a pardon.

Terry LaBolt presided at the harmonium with the six-piece orchestra that accompanied The Three Penny Opera. DJ Gray was the movement and choreographer for the show. It was a busy scene with many, many moves. The costume designer…many, many costumes…was Brittany Staudacher. Lighting designer, if it’s in the dark it doesn’t matter, was Lee Anne Meeks. Our sound designer was Grace Leckey. 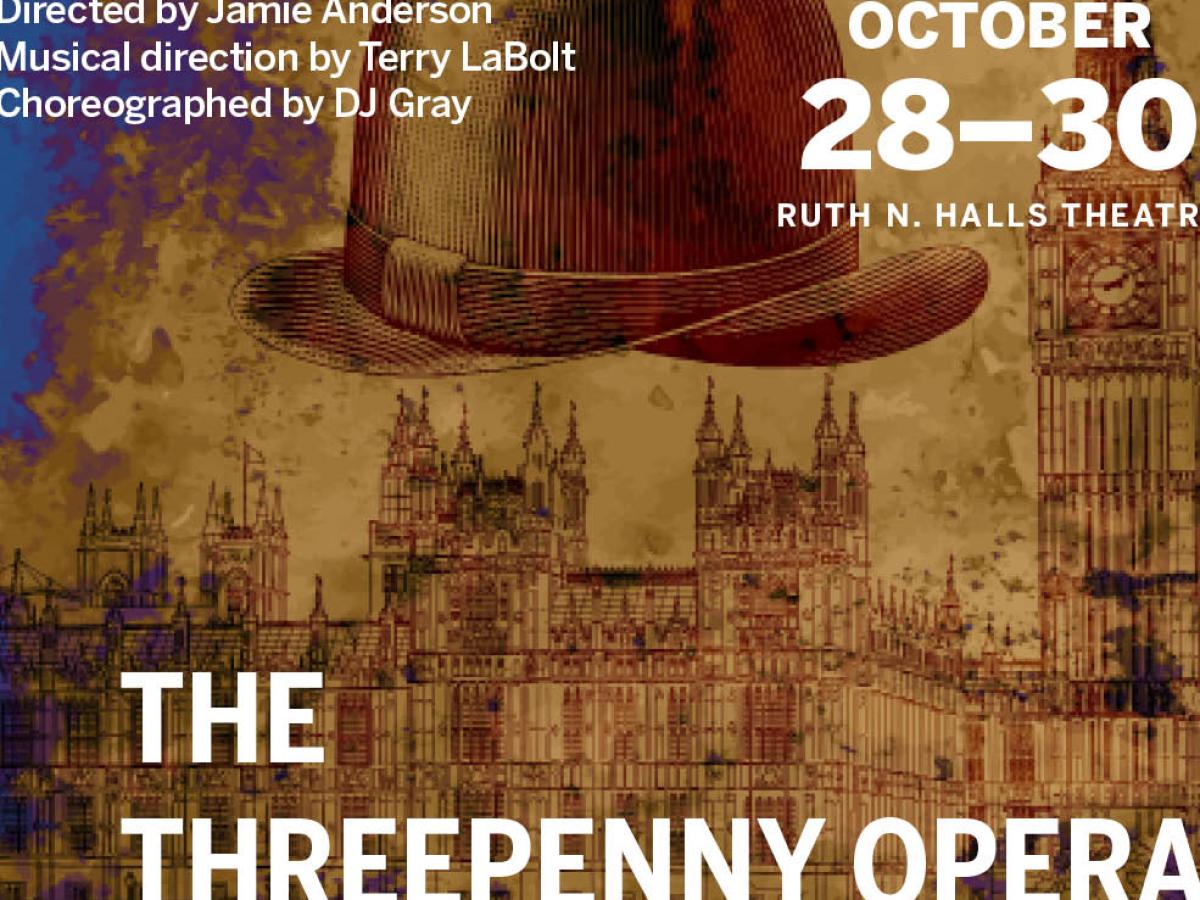 the production on stage at IU

Bertold Brecht and Kurt Weill's The Threepenny Opera updates The Beggars Opera from 1728 by John Gay with a twentieth-century twist.
Support For Indiana Public Media Comes From