The Tragedy of Carmen 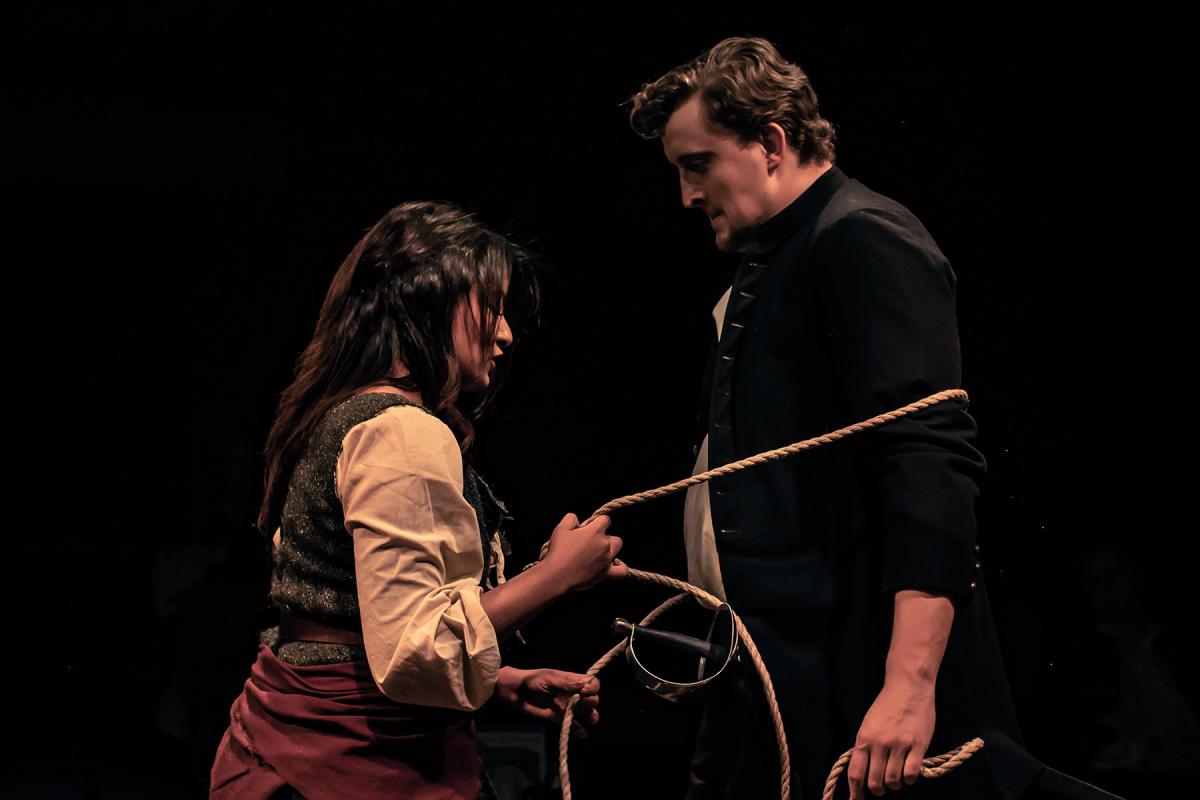 A team led by director Rory Willats and music director Aleksy Artemyev offers an up close and personal Carmen in the Ivy Tech John Waldron Arts Center’s intimate Rose Firebay. In this thoughtfully scaled production, the trappings of Bizet’s colorful opera are put aside to focus on the emotional heart of the drama. The cast in the non-stop eighty minute show is a quartet with the doomed gypsy Carmen, her reluctant soldier lover Don Jose, Micaela his innocent girl from back home and Escamillo, the flamboyant toreador.

As the show begins, a single rose sprouts from the sand in the middle of set designer Patrick Kvachkoff’s ring. Carmen, Deepa Johnny picks it and as Aleksey Artemyev slowly plays her death theme, she shuffles and deals the cards that keep spelling her doom. Spencer Lawrence Boyd, as the soon to be promoted Don Jose, appears and despite his scrubbed appearance is entranced with this shabby woman. Anne Slovin, an appealing Micaela comes from home with messages from Don’s mother and a hope of matrimony, but her sunshine is no match for the darker Carmen. Nick Farmer makes an engaging appearance as one of Carmen’s lovers, Escamillo the bull fighter.

The Rose Firebay is a small theatre and with the simple piano accompaniment the voices of these opera sized singers were allowed to be a bit more expressive and nuanced than they might be in a larger hall. In the full opera, soprano Anne Slovin’s Micaela is an often forgettable role. Here, especially in her contest with Carmen for Don Jose, her lovely voice along with its sweetness and graciousness are sorely tested and featured. The toreador’s song from Carmen has appeared on the concert stage, in many cartoons, and in some crude parodies. Its opening chords are a bit like the first notes of Beethoven’s Fifth Symphony, you could probably sing them. Baritone Nick Farmer offers a sterling performance of this flashy piece.

At the heart of Carmen is the tragedy of the gypsy and her soldier lover. Tenor Spencer Lawrence Boyd is the up and coming soldier, caught in the stickiness of Carmen’s web. Despite his own efforts and those of Micaela, Carmen’s dark attraction lures him. His singing, especially in duets was very fine. In The Tragedy of Carmen, Carmen believes that she is doomed right from the piano notes of her theme and the message of the cards she throws. Mezzo Deepa Johnny makes the arc of Carmen’s story her energy, her lovers and her final death at the hands of Don Jose a compelling tale. This version allows for plenty of varied singing from the low to the high of her range.

The Tragedy of Carmen at the Ivy Tech John Waldron Arts Center’s Rose Firebay plays Thursday December 19 and Friday December 20. It is in French with discrete supertitles. Show time is seven o’clock and the eighty minute performance is done without intermission.