The (R)evolution of Steve Jobs...the Opera 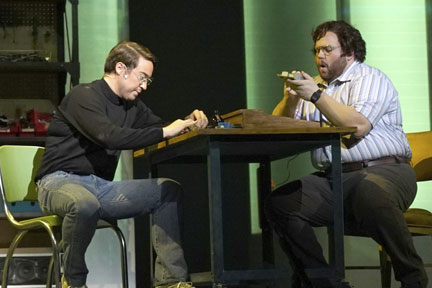 I’m George Walker for WFIU ARTS, Saturday night’s smartly paced performance of Mason Bates and Mark Campbell’s The (R)evolution of Steve Jobs finished to a loudly appreciative standing ovation with loud cheers for the technical crew, the chorus and the principals. The opera is a coproduction and everything except the IU cast, orchestra and the Musical Arts Center have come from the premiere in Santa Fe. Next year it continues its travels to the city where Jobs launched his new device, San Francisco.

The opera, conducted by Michael Christie is a first for composer Bates and it’s full of his signature 21st century romantic orchestral sound with an overlay of touches of today’s electronics and a pounding bass toward the end, all played by Kathryn Jorgensen and Mathew Ridge. Especially prominent were a nod to Steve Jobs’ affection for steel string guitar with Onur Alakavuklar and to his meditative leanings with his Zen mentor Kobrun with the percussion section.

Veteran librettist Mark Campbell has chosen to focus on thematic connections in Jobs’ life. The eighteen scenes come from different places and parts of his life. A prologue in 1965 in the family’s modest garage jumps to the great public announcement in 2007. Back in the garage In 1973, Jobs and his childhood friend Steve Wozniak laugh at a neat techy way to cheat Ma Bell on long distance. Jobs is a complex man. Accomplishments, joy and cruelty are mixed. He makes love to his girlfriend Chrisann in an LSD inspired landscape in 1974 and later in the sober midst of the thrill of a technical discovery in 1976 demands that the fruit of the love be aborted.

Later life is also full of thrills, sensitive and brutal moments. In 1980 Both Chrisann and Steve Wozniak abandon Jobs and mourn his becoming one of the people they hated. Following exile from his company, in 1989 Laurene Powell, the woman who seems to humanize Jobs comes into his life in moving scenes of insight that are in part fueled by Jobs’ Buddhist mentor Kobrun.

The music, the characters and the drama all work together with the aid of a wonderfully flexible set

of six large monoliths from set designer Tita Tzykun. There are lots and lots of lighting and projections from Japhy Weideman. They range from complex circuit boards to gentle nature panoramas and even an appreciation of Ansel Adams’ photos. Sometimes it seemed as if there was a bit too much of the busy visual, but the nimble hard working stage crew kept those set pieces and the show moving.

Throughout the hour and a half of the production, attention seldom flagged though there were moments when I was tempted to see the piece as a cantata instead of an opera. The program offered synopsis of the scenes, but they weren’t really needed. The strength of the character development and the themes connected the scenes in ways that even a straight linear account couldn’t have supported.

Stage director Kevin Newbury was with the opera for the premiere with a professional cast and the recording in Sante Fe. He says that it’s been great to reinvestigate the piece with fresh eyes. Frankly, I enjoyed an opera where the cast and chorus of mostly twenty-somethings fits perfectly. In The (R)evolution of Steve Jobs there’s no need for white wigs and the only teen ager is played by an eighth grader.

At IU, the eighth grader is Jake Sater. Saturday night Edward Cleary was an effective Steve Jobs. Gregory McClelland was his child hood friend and later critic Steve Wozniak. I wished that the opera offered more of this humane tenor. Emily Warren was the Reed College teacher who set Jobs off on his spiritual travels. David Lee was the thoughtful and often funny Zen mentor Kobrun. Nicol a Santoro was a sympathetic figure as the discarded early girlfriend Chrisann. Courtney Jameson was a force as the more assertive girlfriend and later wife Laurene Powell. Nick Farmer was Jobs’ adoptive father.

The IU Opera Theater’s production of The (R)evolution of Steve Jobs wraps up this Friday the 21st and Saturday the 22, just as Apple rolls out the iPhone XS and the XS Max. Advances look impressive and prices seem a bit daunting. Apparently they have plenty in stock. Meanwhile modestly priced tickets for the IU production will probably soon be in short supply.