'The Pillowman': Far From Soft And Fluffy 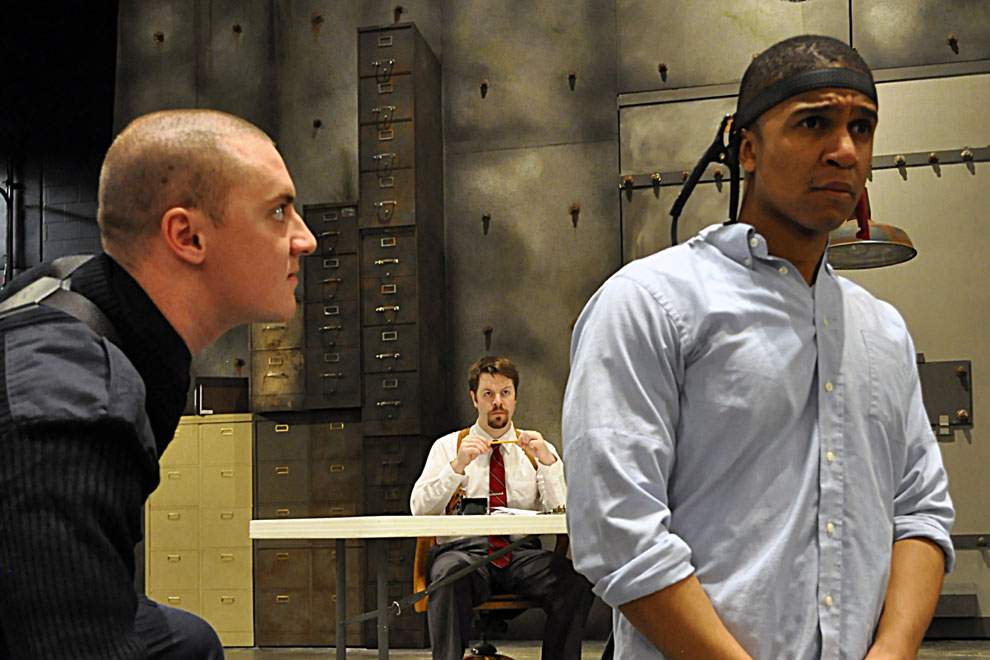 Martin McDonagh's The Pillowman at IU's Lee Norvelle Theatre and Drama Center is a fascinating and involving piece of theatre directed with intelligence and skill by Mark Kamie against the backdrop of scenic designer Dan Tracy's massive grey wall with huge doors flanked by stacks of messy filing cabinets.

The play is an oppressively dark story of interrogation in a lawless police state. It includes a long account of vicious child abuse, murders of children, a warm account of brotherly love that concludes with fratricide and though it's hard to believe a slightly offbeat but well earned sunny ending.

The ever appealing Jaysen Wright plays Katurian, a low level worker whose passion is writing short stories. He's been called in by the police because some recent murders mirror his plots. Aaron Kirkpatrick and Chris Kleckner who play his interrogators are a truly frightening pair as officers of a nameless totalitarian state. The first twenty-five minutes of The Pillowman, an interrogation scene, werefor me nearly unendurable. Imagine Harold Pinter's The Birthday Party played by Monty Python with a major dose of relentless menace and you'll have a feel for the situation.

The Katurian's slow learning brother, Michal, played with a rough, doggy warmth by Matt Birdsong is also brought in. The brothers' long, warmly protective relationship, its strains and conclusion will remind most theatre goers of John Steinbeck's George and Lennie in Of Mice and Men.

Now, so far I've tried to pin down The Pillowman with a couple of literary sources but it is much too deep, too complex and just too emotionally weighted with its twists, turns, levels of reality and myth for that to do anything but suggest the outlines. Katurian's stories seem to be simple pieces. Sometimes they are read, sometimes told and sometimes acted out as the play shifts about. In the play they function with hints of the power of fairy tales and fables. Sometimes they are treated literally, sometimes as metaphor and sometimes they're just used as McGuffins.

The Pillowman, and by the way there is a Pillowman-a nine foot tall semi benevolent figure that's made of pillows is a solidly directed, acted and produced piece of brilliant theatre.

The Pillowman at the Lee Norvelle Theatre and Drama Center continues the 27-31st with evening performances at seven-thirty and an additional Saturday matinee at 2.