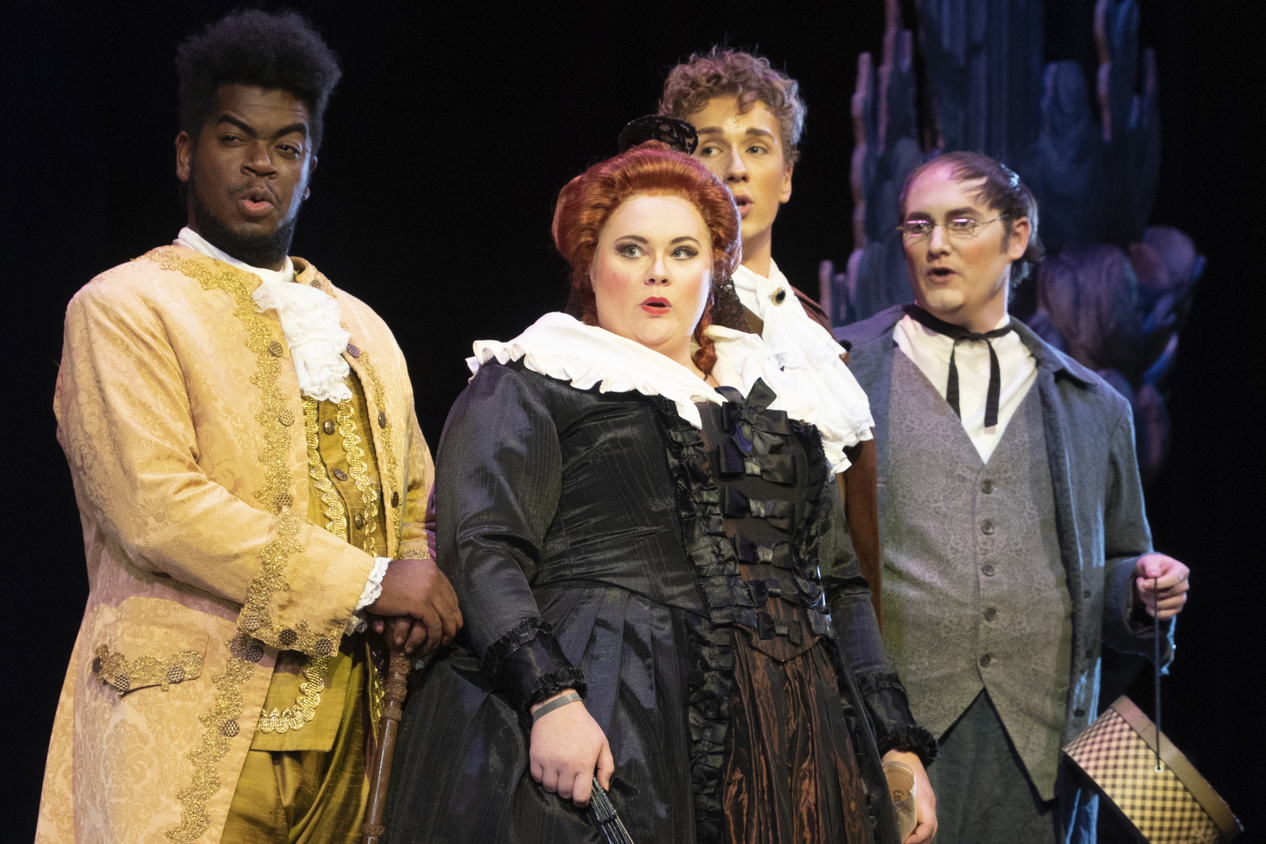 IU Opera Theater’s season opener is a thrilling production of Mozart’s comic The Marriage of Figaro, Le Nozze di Figaro. Saturday night’s cast is an outstanding group of singer/actors ably coached in this production by stage director Michael Shell and carefully led from the pit by conductor Antony Walker. Walter Huff’s choruses are delightful musically and dramatically. The complex set, with a variety of looks is very effectively lit by Ken Phillips. There was hearty applause for individual scenes and a full ovation at the final curtain call.

Although the music was classical and the costuming from the period, the play seems both delightfully and all too current. Aaron Murphy as the Count is a philanderer. He was a philanderer before his marriage and despite the love of the Countess, Mary Martin, he’s philandering again. Although he’s been bestowing his favors on Barbarina, Brianna Murray, his current target is Susanna, Kate Johnson the bride of Figaro, Milan Babic. Meanwhile the hormonally driven Cherubino, Grace Skinner is being disguised in drag. Philandering from a position of power, a tattoo like birthmark, cross dressing…how 21st century.

The action of Figaro all takes place in one very active day. It begins as Figaro measures out the chamber room that lies conveniently between the Count and the Countesses rooms.  As he is cheerfully measures, his Susanna weaves her own song explaining the dangers of their position. The opera is rich with these ensemble pieces that have multiple meanings and the super titles frequently drew laughs from the audience. Figaro is incensed and almost manages to close the opera at the end of the first act, but not quite and after intermission, there are new musical and plot delights to come.

The Count keeps coming up with various delays for the marriage. The most interesting one involves a trio of comedia del arte characters. There’s Dr. Bartolo, a redoubtable Ricardo Ceballos who’s had it in for Figaro since he stole the Countess for the Count. His servant is the personable Marcellina, Annmarie Errico who’s lent Figaro some money with a promise of matrimony. And then there’s Don Basilio the wily music teacher, Sylvester Makobi. The Count hopes to clear his way to Susanna by marrying Figaro off to Marcellina. But, in a surprise discovery, we all learn that Marcellina is Figaro’s mother, Dr. Bartolo his father.  Susanna, who’s come to pay off Figaro’s debt angrily and briefly, misreads the mother son embrace.

From time to time, a colorful Drew Conner appears as the organically marked gardener Antonio. The Count is happy for his explanation of an early confusion, and yet all are holding their noses.

In the midst of the second act, the curtain came down briefly and from the interior of the castle we were out in the darkened green sculpture garden for the play’s evening mix up with Susanna dressed as the Countess and the Countess as Susanna. Cherubino and Barbarina are around as well and Figaro has gathered his family and the music teacher to witness the scenes. Naturally, chaos results.

Happily, and with a couple of choruses involving all the principles weddings do occur. The Count apologizes and pledges renewed devotion to the Countess. Dr. Bartolo and Marcellina will make it legal. A wiser Figaro and the clever Susanna will wed. The still quite innocent Cherubino and the smarter Barbarina will also be saying ‘I do. ‘An action packed day that began in the morning ends as the stars twinkle.

IU’s production of Mozart’s Le nozze di Figaro has two final performances, Friday and Saturday the 27th and 28th in the Musical Arts Center at 7:30.

At the theatre for you, I’m George Walker​