The Living at Butler University

I'm George Walker for WFIU arts. Butler University is presenting The Living by Anthony Clairvoe  set in 1665 in the Great Plague of London. It was a metaphor for the AIDS epidemic in the 90s, and it's a metaphor for the COVID-19. And. The episodes in our lives in the pandemic. We're visiting with the director Constance Macy, the actor Vicky Turner and the actor Chinyelu Mwaafrika. What attracted you to this particular play?

Constance Macy: Well, obviously the circumstances that we’re in.  I had been contracted three years ago to come in at this time and direct a play.  The pandemic continued on and. I wrote to Diane Timmerman and said if Butler is still under all of these Covid restrictions, I don't want to direct Romeo and Juliet. And that's not a production I want to participate in. I wouldn't want to see that production.  Diane said. ‘well, , what do you think would be a better play to produce with Covid restriction?” I remembered The Living. I remembered seeing it 25 years ago and I remembered the aspect of it that I distinctly remembered was that nobody touched each other.  And that was of course one of the rules that we are .living with at Butler, Now we can't touch each other. We can't come near each other. We have to be masked up. So, I remembered that in The Living nobody touched each other.I remember that being a very poignant piece of it, I got a copy of it, read it, and realized that this was the perfect play to produced right now.

George: A morality tale of a ghoulish slice of history. An affirmation of life, perhaps bitterly funny, and inevitably sad. There’s genderbending for the production at Butler. And there are eight women and two men, Vicky, which of the women do you play?

George: Uh, huh, and what does Sarah do?

Vicky: Sarah starts off.  her husband is just died.So she's looking to protect the rest of her family. And it's really just her journey from her family through her becoming a nurse later on in the play. And lot of that kind of journey.

George: Yes, Vicki is a junior at Butler. One of the two men in the cast our guest is Chinylu Mwaafricka. Tell us a little bit about your role. You're in your second year at Butler, I think.

Chinyelu Mwaafricka: Yeah, so my character Grant , Doctor John.Yeah Grant he's a fellow of the Royal Society.I agree and he is, I guess, kind of like credited in the play is inventing  the statistics you know, a field of research and so he basically comes in.  And he'’s hey I can help you all. You know predict where the plague is going, how fast it's going there. And.I can like analyze the data to help control the spread and so that's what he does throughout. And he also serves as a narator, which is kind is kind of fitting I suppose as someone who’s not from London. So kind of like an outsider looking at. A surrogate for the audience.

George: You serves as a surrogate for the audience as well. Constance maintained that she had seen a production of the living in which people do not touch.

Constance: Well, we've we've kind of blended the worlds of then and now you will see some actors in like modern protective gear and then you'll see some period costumes as well We've got. all kinds of sanitizing and and safety measures in place, and we're not trying to hide any of them. You'll see cans of Lysol on stage and rubber gloves, People using tongs to pass things around, and a lot of that is in the story.  When we staged it, I tried to stage it so that people didn't come in and out of the same entrances.  We took the rules that we had and kind of embellished them and relished them to make a commentary on what we're living with now.

Constance: My favorite thing to do.

George: We've been talking with Constance Macy, actors Vicky Turner and Chinyelu Mwaafrika about the upcoming production at Butler University of The Living by Anthony Clarvoe. It's a metaphor from the Great Plague of London in in 1665. It was a metaphor for the AIDS epidemic in the 90s, and it's a metaphor for the COVID-19 and the episodes in our lives in the pandemic. 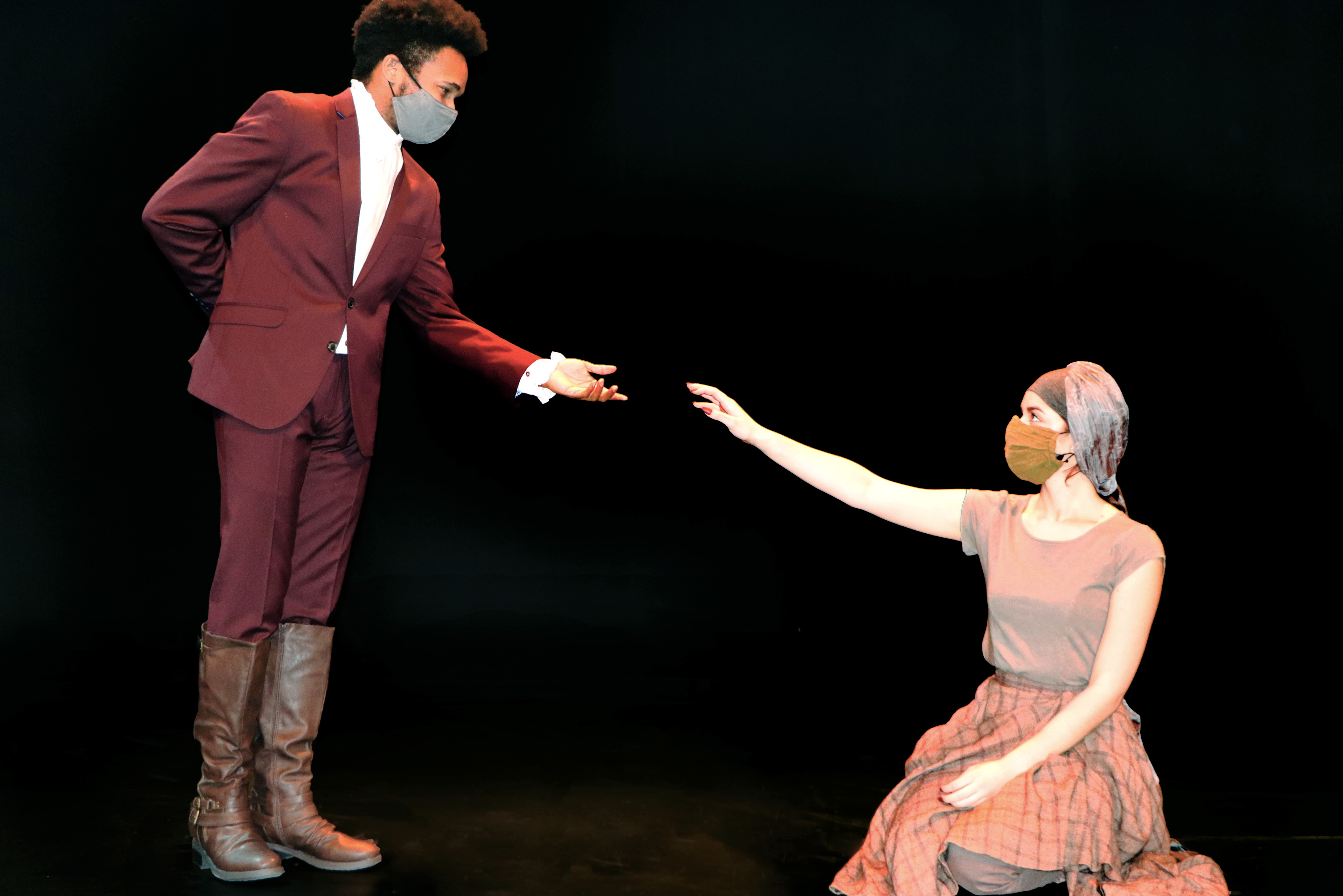 Butler Theatre's THE LIVING by Anthony Clarvoe, directed by Constance Macy, is set in the Great Plague of London in 1665. It's a metaphor for the AIDS epidemic in tne 90s and continues to be a metaphor COVID-19 in our own time. Listen to the audio for the voices of Constance Macy, Vicky Turner and Chinyelu Mwaafrika as they explain the production and their roles.

THE LIVING plays for ONE NIGHT ONLY this Friday, Feb 26th at 7pm in Clowes Memorial Hall. In-person tickets are sold out but a free livestream is available. Viewers may find a link for the livestream at the Butler Arts & Event Center website and opting in to the listserv.