The Lion, the Witch...and that magical Wardrobe 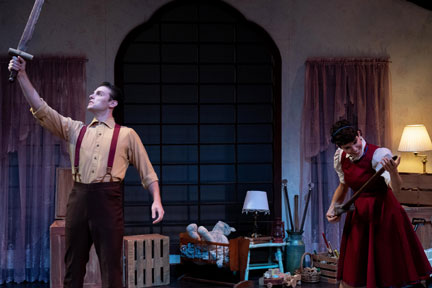 There was a full house at the Ivy Tech John Waldron Arts Center for this past Saturday’s show of The Lion, the Witch and the Wardrobe. Most of the kids around me knew what a lion and a witch are, but many had to be clued in by their parents about just what a wardrobe is. Suffice to say that by the end of the brief well-put together hour of Cardinal for Kids, many wished that they had one.

As a teen I had read C.S. Lewis’s sci-fi and as an English major his criticism, but it was only a couple of weeks ago that I tried The Lion, the Witch and the Wardrobe. Playwright Le Clanche Du Rand has done a great job of making a play from the tale. The children, Peter, Susan, Edmund and Lucy are all grown up and they’ve come to their old World War II playroom. As they think back, Lucy recaptures her youthful adventuring spirit. Edmund dons horns and high heels to appear as the welcoming though deceitful faun, Mr. Tumnus. Susan with a white wrap from the wardrobe is the Witch. Lucy with the aid of Peter is the brave Mr. Beaver. Peter puts on a furry coat and mane as the noble lion Aslan.

The world of Narnia that the four encounter is a place ruled by a spell of the Witch. It’s always winter and it’s never Christmas. Although there are stories of the goodness of a character named Aslan, he’s been away for a long time. Meanwhile the witch rules. She corrupts the greedy Edmund with a promise of endless Turkish Delight and the power to rule over his siblings. With her magic wand, she turns her opponents to stone statues. C.S. Lewis’s story is a made up mix of early English mysticism and Christianity. There’s an imaginary legend that if four heroes come to a stone table high on a mountain the witch’s power will be broken.

The three do make the difficult and dramatic ascent to the stone table. It is there that they unite with Aslan. However, the Queen with Edmund arrive and she claims victory. However, it’s Aslan’s willingness to sacrifice his life, to redeem the traitorous Edmund that makes the foursome. In a rather dramatic scene, the witch does humiliate and kill Aslan, but he later arises and in the final dramatic battle, it’s Edmund who breaks the witch’s wand and turns the tide.

Erin Gautille is the designer for the wonderfully detailed old playroom and the neatly reversing wardrobe. Kayla Cieslinksi came up with the costuming the nicely moves from the present to the mystical past. I’m not sure who to credit, but I liked the puppet and the puppeteers of Mr. Beaver. Brandon Reed’s sound design from the bird that leads the children, to the whip cracks for the witch and the lion’s roar of Aslan were all neatly coordinated and added much. Skillful direction and creative use of the props is by Jenny McKnight.

Anna Butler is a charmer as the adventursome Lucy and, with Trevor Purkiser’s help a convincing Mr. Beaver. Jake McCutcheon, Edmund is the friendly Mr. Tumnus. He’s also the traitorous Edmund, but he also saves the day in battle with the Witch. Courtney Reid-Harris is kindly Susan and the whip cracking merciless Witch. Trevor Purkiser is the brave Peter and later the self-sacrificing, Aslan.

The Cardinal for Kids production of C.S. Lewis’s The Lion, the Witch and the Wardrobe at the Ivy Tech John Waldron Arts Center plays through September 23rd