The Enlightenment of Percival Von Schmootz

The Bloomington Playwrights Project continues to come up with clever and engaging opening accounts of their corporate supporters. For The Enlightenment of Percival Von Smootz, producing artistic director Chad Rabinovitz was on deck. He selected an audience member asked them to put their cel phone in an envelope and proceeded to adroitly run through the sponsors in memorable ways. Meanwhile, Rabinovitz smashed a series of cel phone envelopes with a hammer. This raised our and the subject’s fears that the cel phone was among them. Somehow, and Chad did say that on the previous night things has not gone well, the volunteer’s cel phone was returned safely as the remaining sponsors were read out. There was indeed, a bit of tension there as we were prepared for the play.

The Enlightenment of Percival Von Smootz has a clever book and lyrics by Chris Dimond with serviceable music by Michael Kooman. The biggest and in many ways most awesome set that ever been at Playwrights is by IU trained, Playwrights veteran Chris Rhoton. Even the “exit” signs are in Olde English script. It’s so large that the band directed by current IU student Brandon Magid is actually outside the theatre connected by the wonders of electronics.  It’s fluently directed by the New York based Isabel Perry. The opening scene in the dark part of the middle ages is in the town of Manureville. If you like Monty Python, this is the play for you.

Our hero, Percy is played by tall, lanky Miles Blim. The average life span at this time is thirty. Percy is twenty-five. He’s on a five-year quest to bring the dark ages into the enlightenment and his journey’s stops each take just about a year from his total. Along the way, he meets various distractions and challenges. After his team of poo shovelers, followed by his mother, Casey Margo McCoy, all expire from the Black Death. Percy promises to be a flame in the darkness.

The theatre itself become a yearlong distraction as Percy joins the company led by a mustachioed Casia Scagnoli. He appears, with a pair of coconuts as the show’s ingenue coached by a boyish McCoy. Just as Percy is discarding those coconuts, Nate Curlott appears as the delightfully talented and confused crusading knight Sir Brontis. There’s quite a discussion as the two hack a couple of bystanders and then the knight proposes having his way with a widow, Scagnoli without the mustache. After a substantial discussion of the Latin of Prima Foca…yes, it does come down to rape. Brontis cuts off both of Percy’s arms…does this remind you of Monty Python?...  and leaves with the widow.

A group of nuns, led by Tom Slater appear and dither about whether they ought to save Percy. Their discussion involves a series of theological points and I don’t quite remember them. The upshot is that Percy’s body and the arms are transported back the nunnery and they are sewn back on. Initially they are attached but simply sway back and forth and Percy makes very humorous use of them.

Meanwhile, Sir Brontis appears with the news that the king has switched from Roman Catholicism to Episcopalianism.  He assures everyone that the wine is still fine. His servant, Scagnoli again, tries to help him with the pronunciation and he almost gets it right. Following this, there is a wild chase scene that delightfully choreographed, but I don’t quite remember how it fits into the conversion.

Time is running out for Percy and yet he’s been selected to wed the King’s daughter. At first he’s resistant, but then realized that it’s McCoy, again… from the theatre troupe, this time as a woman. Slater is quite delightful as the conniving king. There’s the wedding night, and nine months later and we’re all ready for a joyful birth. However, the doctor, Curlott again, painfully tells Percy that the child and … and the mother have both died. This seems a bit darker that Monty Python and it probably should.

However, the show is a comedy and there is a more or less happy ending as Percy is encouraged to view the view the world as both literal and metaphoric, with laughter and to “find the light while death waits for you.” The whole cast sings and dances.

The Enlightenment of Percival von Schmootz plays through February 8 at the Bloomington Playwrights Project. I haven’t had time to tell you about Kayla Cieslinki’s costumes, but they are, crisp, colorful, varied and simply stunning. You may find this and other previews, reviews and arts pieces at wfiu.org/arts 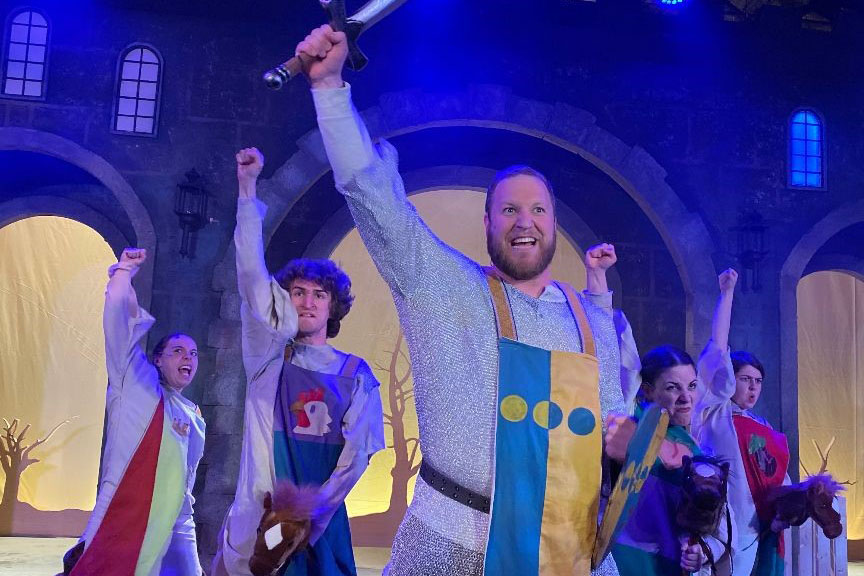