The Elixir of Elixirs, L'Elisir d'Amore 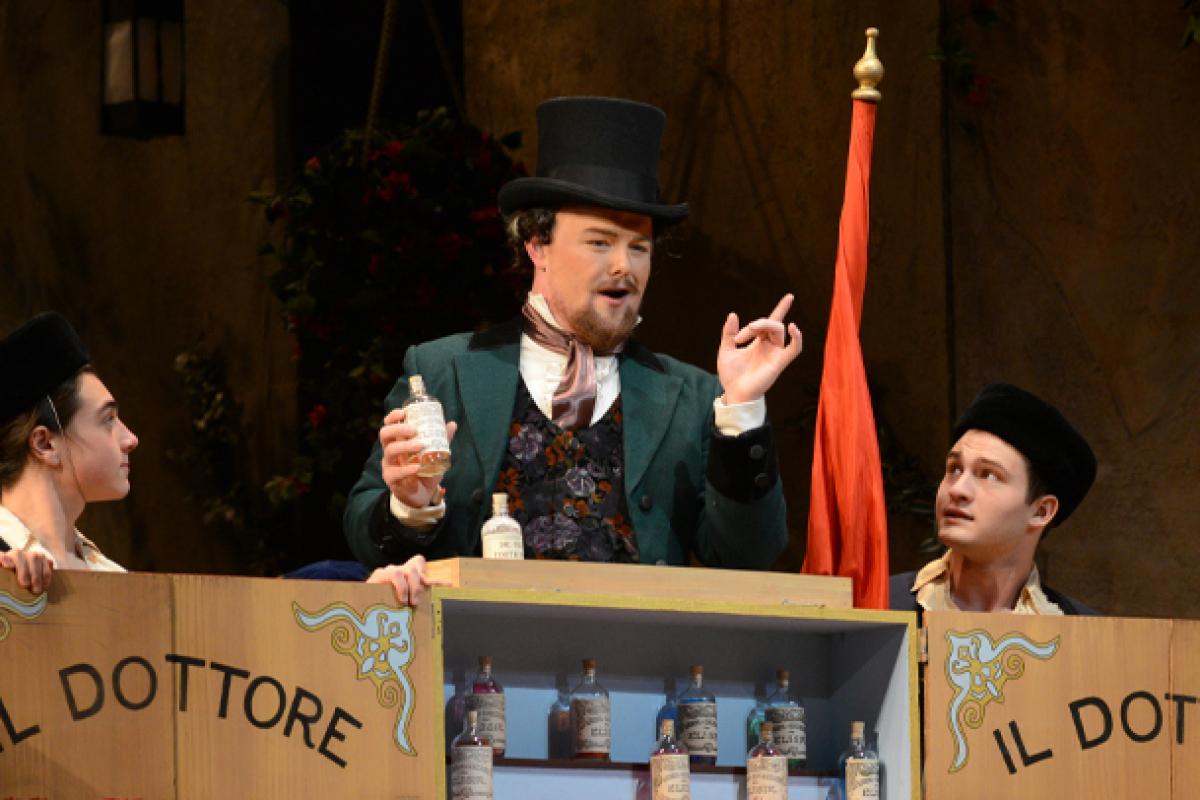 Saturday night’s audience for IU Opera’s The Elixir of Love, L’Elisir d’Amore greeted the opening of the curtain on Robert O’Hearn’s set and the cast of villagers and farm workers with warm applause. The feeling persisted through the fast moving evening as many of the set pieces and arias were saluted with more clapping and cheers. Frankly, I had a cold and was not looking forward to a couple of hours of trying not to sneeze, but the evening flew by.

Alyssa Dessoye sings the role of Adina the wealthy intellectual land owner that woe begone tenor Bradley Birkhardt, Nemorino is swooning over. Director Linda Brovsky early on gives us a clue about Adina’s feelings as the soprano momentarily abandons her book to secretly smile at the tenor. It’s her sharing of the story of Isolde and the love potion that fuels the tenor’s hopes and the opera’s plot.

It seems that there’s seldom a stage love story without the tension of a triangle and baritone Ian Murrell as the bluff Sergeant Belcore is just the man for the job. Belcore and a sextet of more or less hapless soldiers appears to encamp in the village. Belcore is more a figure of fun than a villain, but he does fill the bill. The Sergeant is full of himself and immediately focuses on winning most attractive lady of the town, Adina. Belcore and Nemorino compete, but the odds are all on the side of the colorfully garbed soldier.

Just when things seem to be settled into a neat triangle, Donizetti brings on one of the great characters in comic opera. Dr. Dulcamera’s arrival is heralded by trumpeter Lizbeth Yanez and an energetically choreographed flag waver. The doctor, like the Sergeant is not shy about heralding his wares. Cameron Jackson sings neatly delivered patter songs. The doctor claims to have a nostrum that will cure any disfigurement, any illness, return youth to the aged and even eliminate bugs and mice from their homes. The one thing that he doesn’t suggest is that it will work as a love potion, but Nemorino will ask and the good doctor will accede.

Things begin to look dire for our tenor as a pressed Adina agrees to marry Belcore. The set is decorated for an elaborate wedding, the bride is gowned in white and an elaborate banquet is laid out. In desperation, Nemorino has enlisted in the army for money to try one more shot of the doctor’s elixir of love. Meanwhile…as Adina’s girlfriend Giannetta, Elise Hurwitz tells the village ladies, Nemorino’s uncle had died and this leaves him a wealthy and landed man. When the girls gather round him, our doctor at least momentarily wonders if his elixir, really does work.

In the end, and you’ve probably already guessed it, so this is no spoiler. Adina buys Nemorino out of his enlistment. The sergeant departs for other posts and other ladies. His soldiers leave their village girl friends in the hands of the villagers and field hands. The doctor adds another note to the wonders of his elixir and there’s a celebration.

David Neely is the conductor. Dana tzvetkov is the costumer responsible for the cut and the colors that separate the leading figures from the crowd. Thomas Hase’s lighting helps focus on the important things going on. Linda Brovsky is the stage director and it seemed that every person on stage had a personal role and story behind it. I wish that I could mention by name the energetic flag waver and the bent over old lady with her cane and the short singer who tries in vain to get to Nemorino and I could go on and on.

At the curtain the audience gradually came to its feet as the chorus, then the principals appeared. By the time Nemorino and Adina appeared all were standing.

IU Opera Theater's production of Gaetano Donizetti’s The Elixir of Love, L’Elisir d’Amore plays Friday and Saturday March 1st and 2nd in the Musical Arts Center at 7:30. Opera Insights on the gallery at 6:30.