From Taboo To Transformation, One Dance Step At A Time 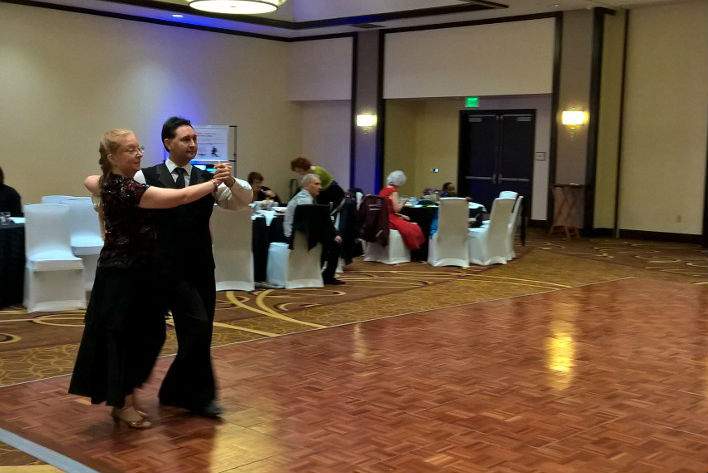 Jannel Smith remembers where she first fell in love with dance.

"I watched Lawrence Welk as a young girl with my grandmother, and that was where I saw it. So I fell in love with the rhythm of it, how the dancers moved with the music," she says.

But she wasn't able to pursue that passion due to the community she grew up in.

"I grew up in a fairly strict Baptist church, and dancing was not allowed. You might move your shoulders or head, but your feet were to stay put."

Despite this, Smith remembers a time in junior high when her mother asked her father if their daughter could learn square dancing.

"I kind of hoped then that he might say yes, and then when he said no, I just didn't understand that at all."

So for the most part, she never considered moving more than her head or shoulders. Then, when she was 39, while working as a home care provider, one of her clients-who used to be a dancer-convinced her to take a lesson.

Four years later, Smith takes dance classes three to four nights a week. And not only has she been doing something that's been forbidden for most of her life, but dancing has made her feel better, physically.

Smith used to play many instruments. But she was diagnosed with arthritis in high school, it got worse, until she couldn't play music anymore.

"Since I've started dancing, that pain has gone down a whole lot, and that's one of the reasons that keeps me coming back. Because if I don't dance for a week, I'm hurtin' again. It doesn't chase all the pain away, but it certainly makes life a whole lot easier, just to keep on moving'"

And because dancing made her feel better, much better–Smith wanted to tell her parents. About six months after she started dancing, she asked her parents to come see her at an upcoming showcase.

At the showcase, she would perform in front of a panel of judges. This was a big deal, and she braced herself for their disappointment. But she didn't get the response she was expecting.

"My dad asked if I knew any Cha-cha. And I said, 'Well, what do you know about Cha-cha?' He plays the accordion, and pulled out his accordion, and started playing some cha-cha music.

Her parents went with her  to that first showcase. And now, they try to make every one.

And how does Smith feel having her parents there to support her?

"It makes me a little more nervous," she says. "But I'm glad that they enjoy it, ‘because, they keep coming back."

Putting Herself Out There

Back in Bloomington at a dance lesson, I asked Smith what's changed in her life since she started dancing five years ago.

"The main part is the dancing itself. Getting out and doing something intentional with people three or four times a week, where that was a desire before I was never really too sure before what to do with others."

While before she might have just gone to bars to hang out, now she just goes out and dances, regardless of whether someone she knows is there. And this confidence has transformed Smith's self-image.

"I feel beautiful. We're walking down the street whether it be to a ballroom or maybe afterwards to dinner, and I feel, I don't know, not my normal working day self."

And for now, Smith plans on dancing for as long as she can.